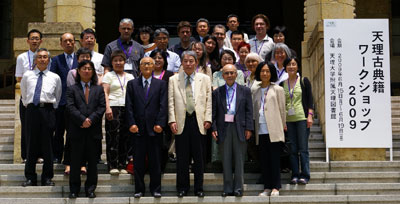 In Spring 2007, the NCC collaborated with the Tenri Workshop committee to coordinate the workshop announcement and to assist screening for North American applicants to the three-year Tenri Antiquarian Materials Workshops to take place at Tenri University in Japan in June 2007, 2008 and 2009.

The workshop participants would like to express their sincere gratitude to Prof. Hideo Yamanaka of Tenri University, whose initial idea made this workshop into reality. We would like also to thank the Tenri-related institutions, especially the Tenri Central Library, and their devoted instructors and staff. We participants are forever indebted to those who made this workshop possible.

The Tenri Workshops were aimed at establishing a cohort of librarians expertly trained in the best practices for managing, cataloguing and organizing Japanese manuscript and antiquarian printed material, who would serve as a core group responsible for providing guidance and training on such material to colleagues in their respective countries/regions.

A series of three workshops (one week each in June for three years) was planned, each building on knowledge acquired in the previous year. The stepped approach allowed participants to apply what is learn to their daily work, raising issues which can be addressed in the following workshop. Each workshop combined lectures, practical sessions and exercises. Lecturers were mainly from Tenri Central Library with some external speakers as guest speakers. The follow are the topics covered in workshops for three years:

Basic knowledge for management and cataloguing of materials: focus on Edo Period printed material. The workshop will contain a combination of lectures and practical sessions on the following key areas:

Management and cataloguing of antiquarian material including manuscripts

Management and cataloguing of antiquarian material in various subjects/formats

Participants of the workshops:

The follow-up studies group "Overseas Japanese Antiquarian Materials Study Group (OJAMASG) = 在外日本古典籍研究会" has been formed to pursue the study of antiquarian materials, to strengthen networking, and to foster close collaboration and consultation among members. The Groups' initial collaborative projects include the compilation of a directory of the collections of Japanese antiquarian material in members' home institutions and the creation of a list of examples of technical terms useful for antiquarian cataloguing (用例集).