Scripps College, located in Claremont, California, has a large teaching collection of Japanese prints, with about 3000 works dating from the 17th to 21st centuries. The collection is strong in theater prints, with over 450 kabuki-related works, over 450 noh theater prints and 20 puppet theater/bunraku/joruri prints. Among individual artists, the collection has over 250 prints by Utagawa Hiroshige (1797–1858), over 280 by Utagawa Kunisada (1786–1865), over 175 by Tsukioka Yoshitoshi (1839–1892), and over 330 by Toyohara Chikanobu (1838–1912. The collection is regularly viewed in seminars and in exhibitions organized by Claremont students. Nearly all these prints are online at our website under “Search the Collection.” 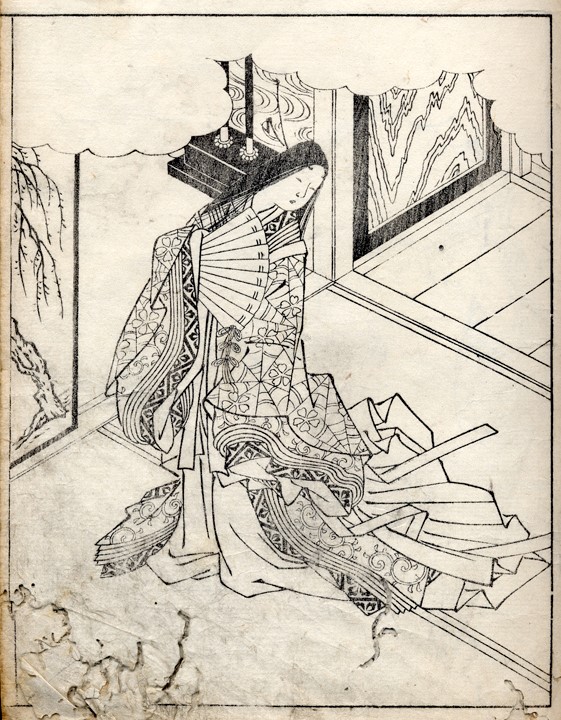 The collection originated with a gift in 1946 of about 200 works from Mrs. James W. (Emeline Chapman) Johnson (1879–1947), who began collecting at the turn of the century. She wrote, “Many is the new dress that I have done without, on the argument that it would soon be worn out anyway, while a print would be a joy forever.” Initially she gave the school about 200 prints, including works by Eisen, Goyo, Harunobu, Hiroshige, Hokusai, Kunichika, Masanobu, Shunsho, Utamaro, and Yoshida. She was part of a group of collectors in the Pasadena area who would regularly meet to discuss their collections, and she carefully recorded the prices she paid in a notebook that was given with the collection when it was donated. She had assembled examples of all "53 Stations of the Tokaido" series and many of the "100 Views of Edo." In 2003, another 300 prints and 100 illustrated books were given to Scripps College by her son and daughter-in-law, Stanley Johnson and Mary Wig Johnson (who was a longtime Trustee of Scripps College).

Among the early works in the Johnson Collection is the 1731 "Eternal Grasses: A Book of Illustrations/ Ehon Tokiwa Gusa" (seen to the right) by the Kyoto artist Nishikawa Sukenobu (1671-1751), which depicts women of various social classes: imperial court ladies and historical figures in volume 1; women of contemporary Kyoto in volume 2; and courtesans of licensed quarters in Kyoto, Osaka, and Edo in volume 3. His illustrations were celebrated for their elegant outlines and elaborately patterned garments, and he was greatly influential on later generations of artists, especially for his interest in a wide variety of women.

In 1954 Mrs. Frederick S. Bailey gave 152 prints, including Hiroshige landscapes, several surimono, and 19 prints by Kawase Hasui (1883-1957). This later group dates mainly to the 1930's and are in extraordinary condition, viewed only in Japanese print seminar classes and not exposed in exhibitions. The silver lines of rain, the reflections in the puddles, and the subtle shading of the trees and thatched roofs give "Rain at Kasuga Shrine" (1933), seen below, an unforgettable atmosphere. 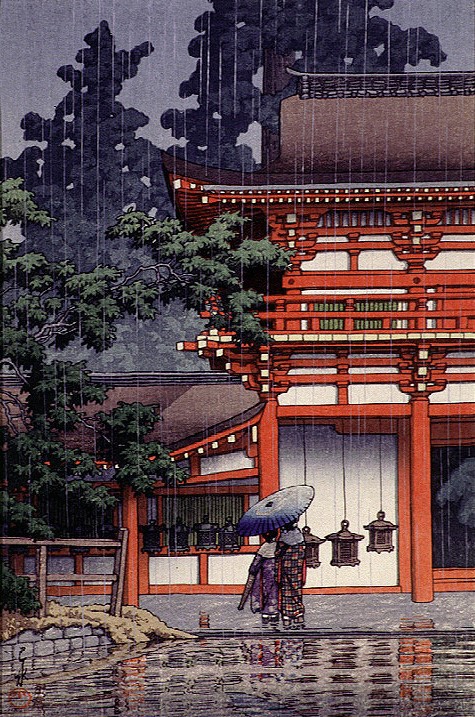 Mr. Fred Marer, a noted collector of American and Asian ceramics, also had a small collection of Japanese prints, from which he loaned 35 works by Tsukioka Yoshitoshi for an exhibition at Scripps in 1994. Dr. and Mrs. William Ballard visited the show because their cat was named "Yoshitoshi." Upon leaving, they asked if Scripps might be interested in an album they had brought containing 125 prints, mostly by Yoshu Chikanobu. Fred Marer was so impressed by the Ballards’ gift that he donated the loaned prints and 200 more. Among the Ballard prints were 50 sheets from the 1884 series "Snow, Moon, Flowers / Setsugekka" and 50 sheets and title page from the 1886 series "Eastern Brocades: Day and Night Compared / Azuma Nishiki Kuya Kurabe" - these formed the basis for the 2006 exhibition and catalog "CHIKANOBU: Modernity and Nostalgia in Japanese Prints." 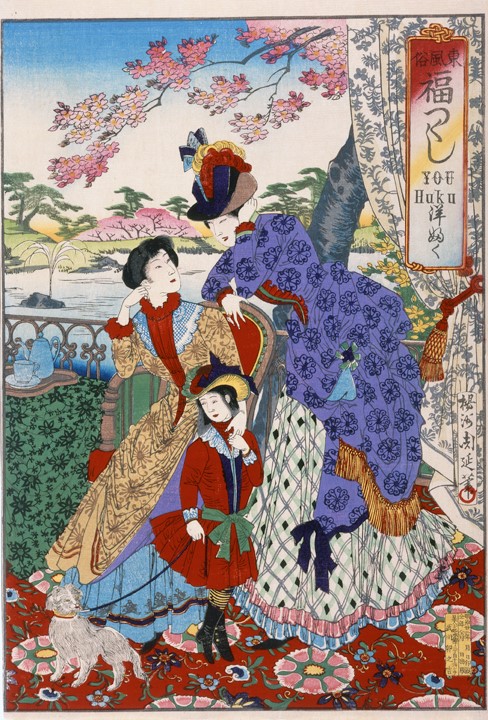 Yōshū Chikanobu (1838-1912) was a samurai retainer and loyal supporter of the Tokugawa shogun. After he was captured and confined by the imperial forces, however, Chikanobu began designing prints that celebrated the Meiji Emperor and the modernization of Japan in the 1870’s and 80's, as seen in the print to the left. By the turn of the century, though, he was creating works that highlighted historic figures, kabuki actors, beautiful women and traditional Japanese activities, especially those of the Tokugawa era. Most of Scripps' collection of Chikanobu and Yoshitoshi prints are online at the Claremont Colleges Digital Library.

Proceeds from the "CHIKANOBU" catalog sales were used to buy the set "100 Noh Plays / Nogaku hyakuban" by Tsukioka Kogyo (1869-1927), produced between 1922 and 1926. Another 150 prints from the series "Pictures of Noh / Nogaku zue" were also acquired. Many of the same plays are depicted in both sets, so that students can compare compositional aspects of the vertical versus horizontal formats and the way the actors are portrayed.

Since 1989, an endowment from the parents of Yoshiko Aoki (SC ’94) has allowed the gallery to acquire Japanese prints for teaching purposes. Over 1,400 works have been added, to deepen the holdings by artists such as Chikanobu, Kogyo, Kunisada, Kuniyoshi, and Yoshitoshi. Students using the prints for assignments frequently compare prints of a single actor by different artists, or of a particular urban or landscape view by several artists, so that they can understand how prints shape their understanding of what is depicted. Recent student organized exhibitions have focused on the Ichikawa lineage of kabuki actors and on 20th century views of Tokyo, Kyoto and Osaka.

Appropriate for a women’s college, the Aoki Endowment funds have also allowed the gallery to acquire works created in the late 20th and 21st centuries by women artists, such as: 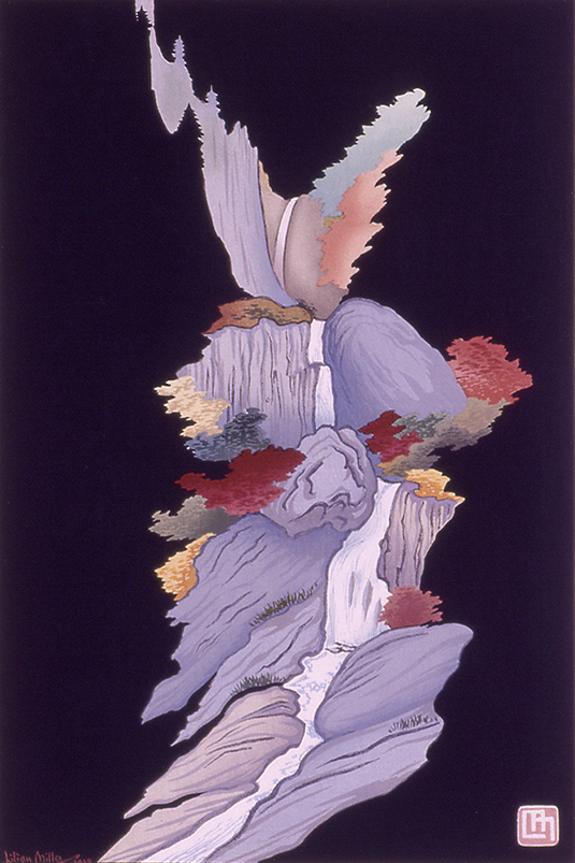 In addition to works by Japanese artists, Scripps has important holdings by non-Japanese working in Japan using traditional methods. In 1944, part of the estate of Lillian Miller (1895-1943) was given to the Scripps Art Department, including more than 30 of her woodblock prints, her carving tools, woodblocks and colors, a large painting on silk "In a Korean Palace Garden," a Korean chest given to her father when he was an American counsel in Korea, and a few Japanese prints. Her works have been displayed several times on campus and in an exhibition (with catalog) at the Pacific Asian Museum in Pasadena.

Another American printmaker working in Japan was Helen Hyde (1868-1919); Scripps has 6 of Hyde's works, gifts of Angelyn and Ralph Riffenburg, who also donated 64 prints by the French born artist Paul Jacoulet (1902-1960), who depicted various people from Japan, Korea, China and the South Pacific. The Riffenburgh collection has been featured in several exhibitions that explored foreigners' views of Asia. The Riffenburghs also gave over 100 Japanese hair ornaments (kanzashi), which are often displayed with prints of women wearing such ornaments and with prints displaying flowers of the four seasons.

In support of interdisciplinary humanities classes at Scripps College, over 400 prints by various artists have been acquired through purchase and gifts that illustrate "The Tale of Genji." Written by an imperial court lady Murasaki Shikibu about 1000 CE, the narrative describes the lives and loves of three generations of Japanese princes. Artists have been illustrating these stories for more than 1000 years, initially in handscroll and album paintings, but from the 17th century in woodblock prints.

Because "The Tale of Genji" was told in 54 chapters, artists have created extensive sets of prints that highlight important moments in the text. Of interest to students is how artists created very different visual images of the same story scenes. Several sets of 54 prints were designed by Utagawa Kunisada, and featured in an exhibition at Scripps College in 2016 - "Genji's World in Japanese Woodblock Prints." Among 20th century artists illustrating "Genji" in prints are Ebina Masao (1913-1980), whose limited-edition woodblock print set published in 1953 used vibrant modern colors and compositions, and Saito Kaoru (b,1931) whose mezzotint images include richly colored close-up portraits of female characters.

For over thirty years, students in “Genji” seminars have viewed the print collection and been challenged to create images of their own, illustrating a particular chapter. The students must decide what narrative moment to depict, how to organize their compositions, and what artistic style would best convey their responses to the chapter. They then present their works in class; most seminar students were not art majors but found the exercise enlightening.

The Scripps College collections also include 20th century artist books by Onchi Koshiro (1891-1955) and Maekawa Senpan (1888-1960) and many frontispieces/ kuchi-e made for monthly journals and magazines.

While quality and condition are important, many prints are purchased for their subject matter, and how each work would support the educational curriculum. Several students have written senior theses about the Scripps collection and many area museums have borrowed works for their exhibitions. Students and campus visitors have first-hand access to the Japanese print collection in a specially fitted viewing room; visits can be arranged through the Ruth Chandler Williamson website.