This year the North American Coordinating Council on Japanese Library Resources 北米日本研究資料調整協議会 is collaborating with institutions and scholars to release a monthly series on our blog entitled Japanese Studies Spotlight. These features showcase exciting online collections available to researchers and students in Japanese Studies, introducing the archive or project, describing their contents, and demonstrating how they can be usefully engaged in research or in the classroom. If you are interested in submitting something to the series, please contact Paula R. Curtis, NCC’s Digital Media Manager, at digitalmediamanager@nccjapan.org.

The Pulverer Collection of Japanese illustrated books was acquired in 2007 by the Freer Gallery of Art and Arthur M. Sackler Gallery (the Smithsonian’s National Museum of Asian Art). The collection was formed over the span of thirty years by Dr. Gerhard Pulverer and his wife Rosemarie, and includes over 900 titles (totaling approximately 2,200 volumes), mostly from the Edo period (1603-1868), although there are a number of twentieth-century works as well. The dedicated website, The World of the Japanese Illustrated Book, brings together the contributions of an extraordinary number of scholars, professionals, and graduate students to catalogue the works through object entries, essays, and videos. Visitors to the site can search by subject, artist, title, or date, and each volume has been scanned in its entirety, often with Dr. Pulverer’s accompanying notes.

I became aware of the collection even before I joined the museum, when I was working on my dissertation. The focus of my research was on surimono 摺物, a subset of Japanese woodblock prints produced in the late eighteenth and early nineteenth centuries. These works were privately commissioned and exquisitely printed, and are often seen as more elegant counterparts to the commercially available ukiyo-e prints that have come to define the popular image of Japanese art at this time. Surimono are often inscribed with comic poems (kyōka 狂歌) and part of my work was looking at the lavishly printed poetry volumes of the Kansei era (1789–1801) to see how their aesthetic fed into the way surimono looked, felt, and circulated. One of the most famous examples of this type of book is Gifts from the Ebb Tide (Shiohi no tsuto 潮干のつと) by Kitagawa Utamaro 喜多川歌麿 (1753–1806), which is so well known that it is usually referred to simply as “The Shell Book.” Accompanied by playful kyōka, the details achieved for the depicted shells are truly remarkable and feature glittering mica pigments and embossing to enhance their tactile effect. The image below is one example from Gifts from the Ebb Tide. 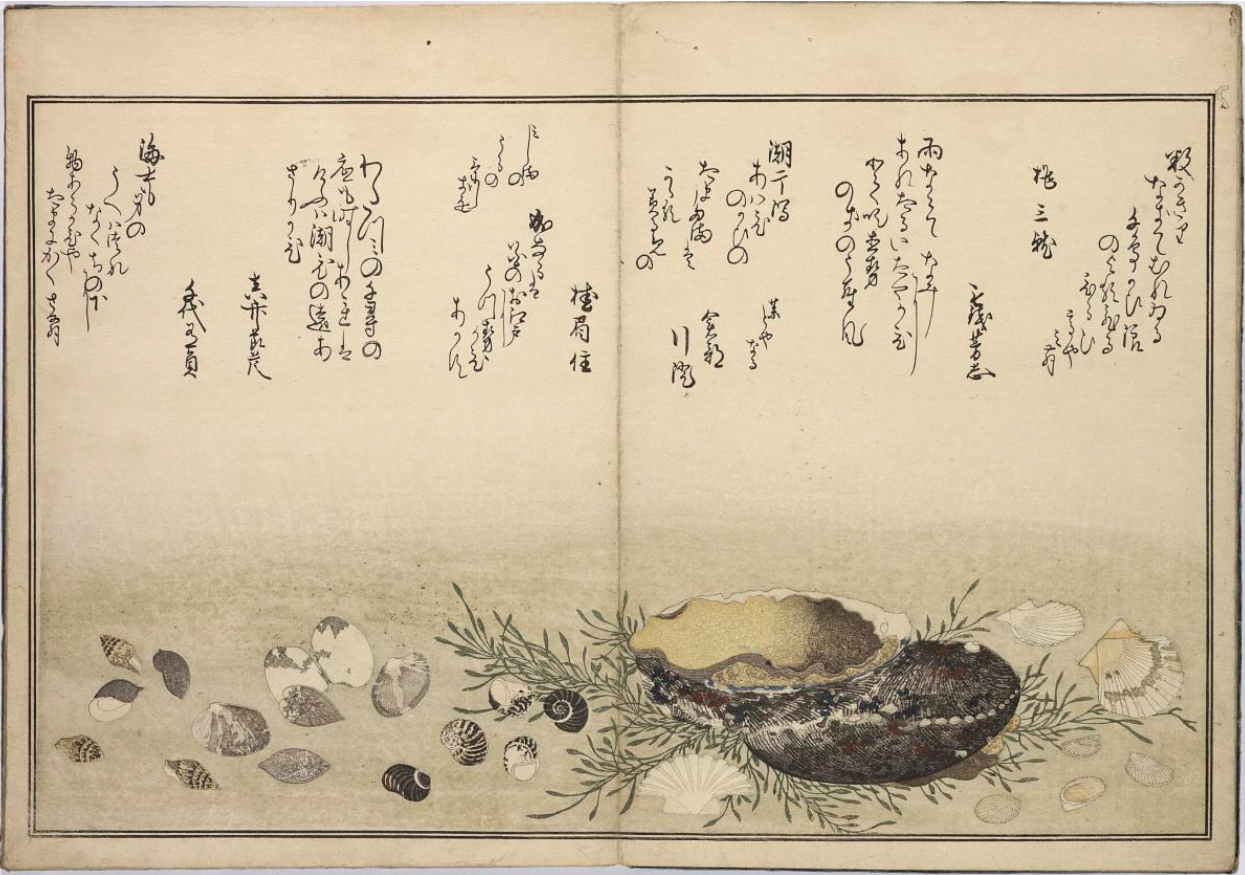 The luxury of this book in particular was very likely what led to the subsequent flourishing of these same techniques in surimono in the Bunka-Bunsei era (1804–1830) that followed. In 1804, warrior authorities issued a specific edict reaffirming an earlier prohibition against the production of deluxe poetry books, which drove these visual qualities “underground” into the world of privately printed surimono, free from government interference. In some cases, the titles of illustrated kyōka volumes specifically mention surimono, such as in Book of Kyōka surimono (Kyōka surimono hon 狂歌摺物本) by Katsushika Hokusai 葛飾北斎 (1760–1849), reinforcing the conscious link between the two media. I’d love to do an exhibition in the future that brings surimono and kyōka volumes together, as there is such a palpable relationship between them. Many of the same figures were involved in commissioning artists and contributing poems to both types of works and having the book collection in the museum makes it easy to compare them side by side.

Several other major museum collections have famous works like Gifts from the Ebb Tide, but at other times, a kyōka volume might only exist in a single collection. Having access to digitized images of an entire book through the website made it very easy for me to browse and reference these works while I was gathering data. Another thing I realized when scrolling through the collection was how well-preserved the books are, not just as objects, but as comparative examples to the single sheet prints, with which I am most familiar. For example, the vegetal purple pigment used throughout most of the Edo period is incredibly fugitive, meaning it degrades very quickly in UV light. As a result, the “purple” in many ukiyo-e prints is often faded to a yellowish, buff color. However, as in the example below, the purple seen in Picture Book of Comic Poems: Mountains Upon Mountains (Ehon kyōka yama mata yama 絵本狂歌山満多山) is in a remarkably vivid state of preservation, even after 200 years. The closed book format has helped to protect the original pigments in a way that is unimaginable for their single sheet cousins. 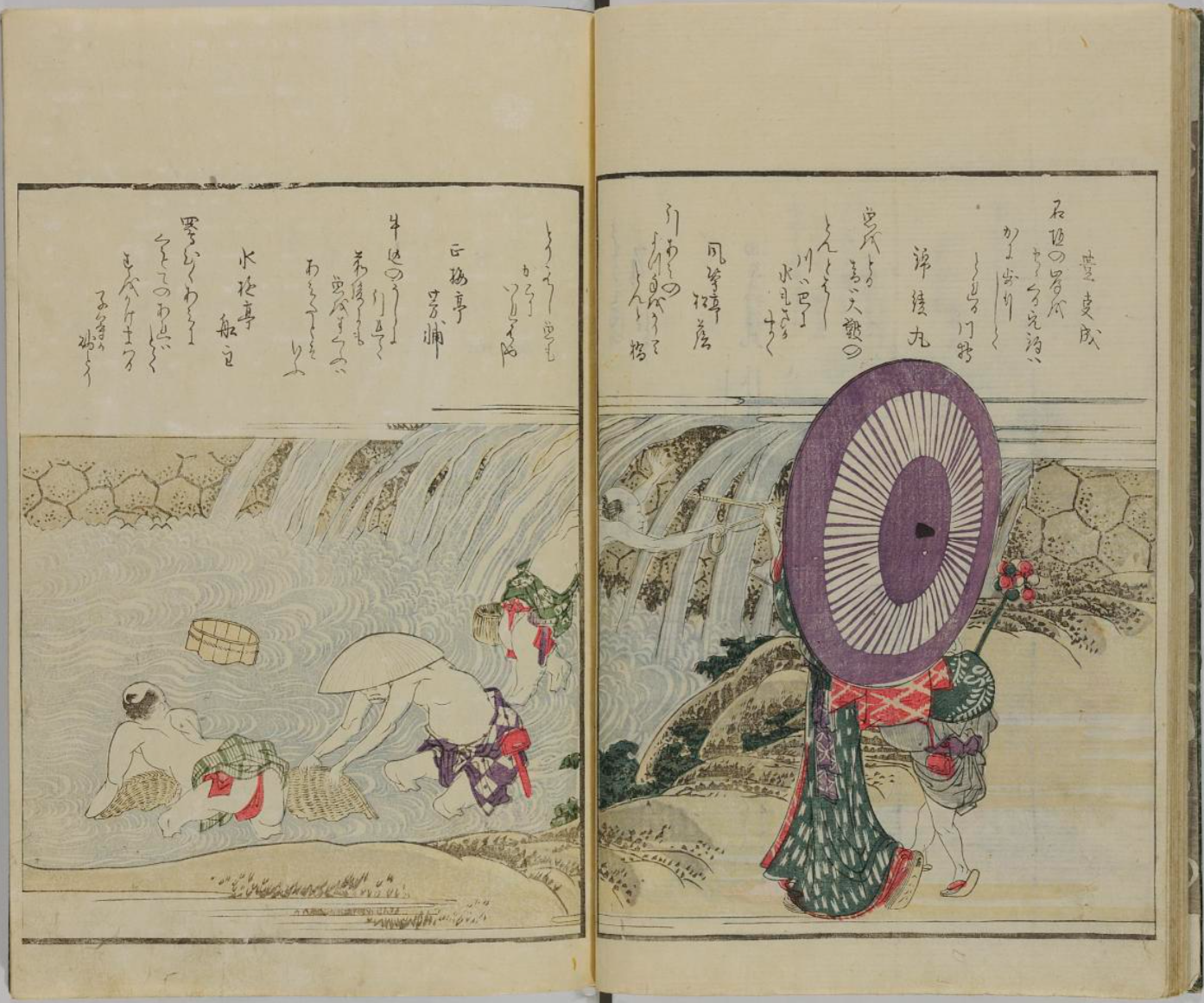 The bulk of cataloguing the Pulverer Collection was done before I arrived at the museum, so I feel extremely lucky to benefit from all the expertise of the scholars who preceded me when it comes to planning future exhibitions for the galleries, or in my own research. I’ve long held an interest in unaffiliated painters of the eighteenth century, who often relied on printed painting manuals to guide their compositions as they travelled through the provinces to take commissions. They didn’t have a studio to rely on for collections of earlier compositions to use as models, so these portable compendia were incredibly useful. The Pulverer Collection is particularly rich in this area, with 260 such painting manuals. New connections are always being made, as dedicated researchers track down the previously unknown source for a painting’s composition in a printed manual. For example, art historian Mabuchi Miho has been doing rigorous research into the sources referenced by the itinerant iconoclast Soga Shōhaku 曾我蕭白 (1730–1781) and used copies of books in our collection containing designs by Hanabusa Itchō 英 一蝶 (1652–1724) in a recent paper.

Although people aware of the collection might know it for its Edo and Meiji period (1868-1912) volumes, there are some twentieth century works in the collection as well. It’s been wonderful to discover that the Pulverer Collection has books by some avant-garde print artists that are well represented in the print collection of the Sackler. These are often collaborative volumes and straddle a space between the appearance of a modern twentieth-century artbook while also resembling the collaborative print albums of earlier centuries. We have several books by Onchi Kōshirō 恩地孝四郎 (1891–1955), who is considered one of the leading members of the creative print movement (sōsaku hanga 創作版画) in the mid-twentieth century—an important figurehead who helped steward printmaking efforts during the difficult conditions of WWII. He was instrumental in forging relationships with members of the US military, including inviting American printmakers to his studio, and helped engineer print projects that would appeal to an international market. However, many of the books have Japanese-text as well as images and were produced primarily for a Japanese-speaking audience. For example, Landscapes of Japan (Nihon no sansui 日本の山水) contains several images of rural, pastoral landscapes like the one seen here that are far more quotidian than those presented to the international market. 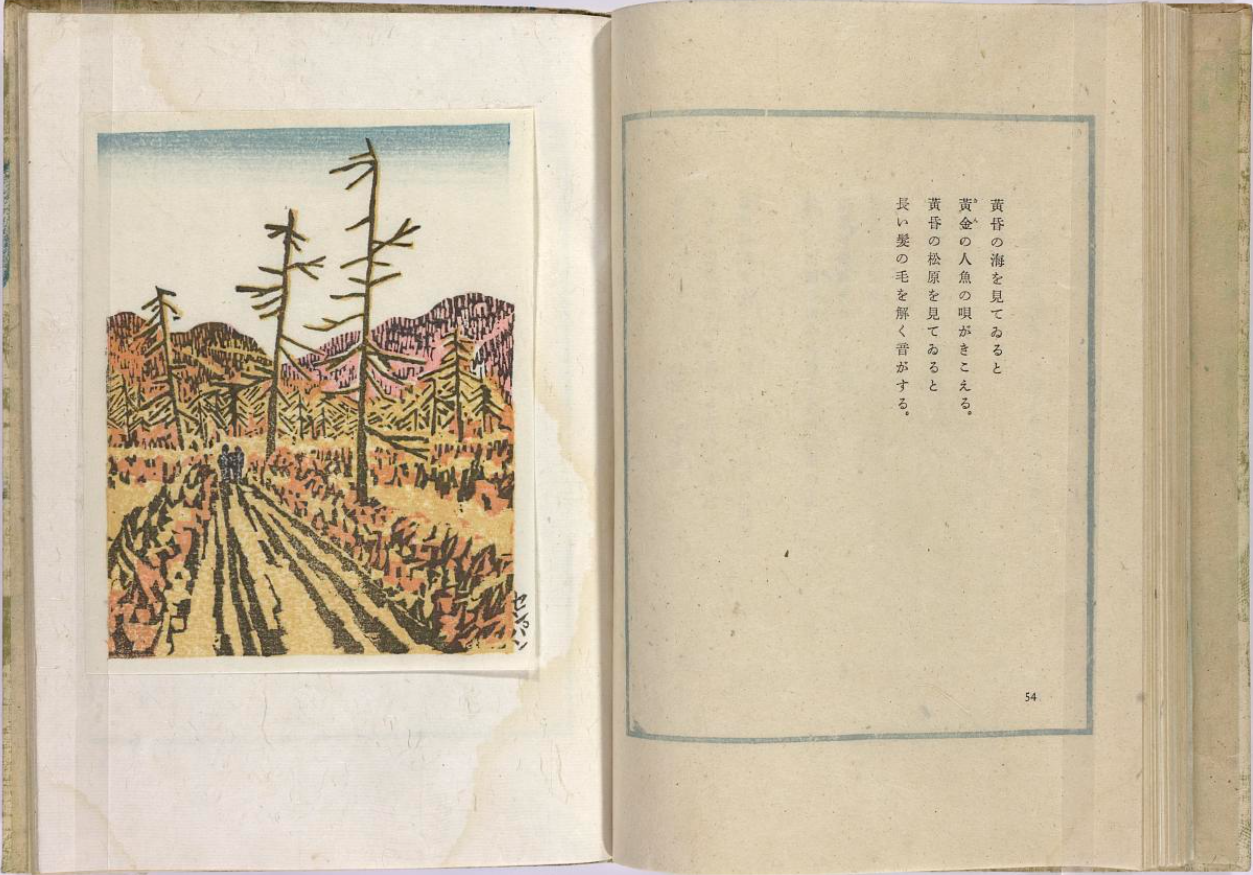 The Pulverer is one of our most accessible and flexible collections, as lending and display of our holdings can be complicated. Part of the original gift by Charles Lang Freer states that objects from the Freer collection cannot be lent to other institutions, and objects from outside the Freer cannot be shown in its galleries. The completion of the Arthur M. Sackler Gallery represented a major change, as objects accessioned into the Sackler can be loaned to other institutions, and objects in the Freer can be shown in the Sackler (although not vice-versa). If a new object enters the museums, a series of conversations between curators determines whether it will be a Freer or a Sackler object. When the Pulverer collection was accessioned, it was decided that it would be part of the Freer Study Collection (the prefix “FSC” before each object number is a hint at this identity). Objects in the Freer Study Collection can be shown in either the Freer or the Sackler and also lent elsewhere. Together with its significant web presence, this makes the Pulverer Collection one of the most accessible collections in the whole museum.

Like all cataloguing, the site is still very much in progress, but the researchers who use the Pulverer to develop publicly available essays, videos, and commentaries continue to add valuable insights through their engagements with the collection.  With future sponsorship it may be possible to invite more graduate students and other specialists to participate in cataloguing and virtually exhibiting the histories of these works. In the meantime, we hope that the site can continue to be of use to students and researchers, or simply those wanting to virtually browse through a good (and beautiful) book.