The Japanese Collection in the University of Manchester Library was first assembled in the 1860s and 1870s by the 25th Earl of Crawford from the collections of prominent 19th century Japanologists such as Pierre Léopold van Alstein (1792-1862), Frederick Victor Dickins (1838-1915), and Philipp Franz von Siebold (1796-1866). A few of the items can be traced back to Isaac Titsingh (1744–1812), who lived in Japan in the 18th century and is considered by many to be the founder of modern Japanese Studies. Our collection includes roughly 230 titles: 22 manuscripts and more than 200 printed works, mostly Japanese titles dating from the Edo period (1603-1868), with some works from the late 19th century and some titles in Dutch and English.

The collection was purchased by Enriqueta Rylands, founder of the John Rylands Library (now part of the University of Manchester Library), in 1901. Professor Peter F. Kornicki was the first to produce a detailed catalogue for it – published in 1993 in the Bulletin of the John Rylands University Library of Manchester (vol. 75, no. 2, pp. 209-300) and now available online in the Library Digital Collections.

Manchester’s collection is heterogeneous, but one of its most remarkable features, which gives it its distinct character, is the Japanese map collection: single and multiple sheet maps, charts and atlases, which – combined with a limited quantity of other material (encyclopaedias, guidebooks, prints, surveys) classifiable as chishi 地誌 (topography) – account for more than one fourth of the whole collection.

A proper cartographic culture in the context of a growingly mapped world first took root in Japan in the Edo period. The ruling Tokugawa family and other local Japanese authorities ordered periodic land surveys in order to facilitate territorial control, which resulted in the production of administrative maps. At the same time, a growing publishing industry generated a wealth of commercial maps, some based on the official models and others created specifically for distribution to the public. The market was wide. In the 17th century, the Tokugawa family established tight restrictions on movement, both within the country and across borders. While some of these initial restrictions were progressively eased, maps and other topographical materials were increasingly sought by consumers of all social standing as means to virtually explore the country (and the surrounding world). They didn’t exclusively serve practical purposes and weren’t necessarily inspired by notions of “objective” or “scientific” representation. Many of them were at least partially pictorial in nature. They stimulated a new, widespread geographical consciousness in Japan.

The Japanese Maps Collection of the John Rylands Library is a rich mirror of this mapped society. It provides examples of all the main existing map types (political maps of Japan, world maps, provincial and regional maps, city maps, road maps, maps of sacred areas), represents a variety of geographical locations, and includes items of great interest.

One famous instance of a map of Japan in the Rylands Collection is the Honchō zukan kōmoku (Outline map of Japan, Japanese 165), by Ishikawa Tomonobu (active ca. 1680-1720), published sometime between 1717 and 1724 (as a revised version of an original 1687 edition).

The author was a writer and illustrator from the chōnin (urban dwellers) class, and his work was mainly addressed to a public of literate commoners. He based this map on a collation of information derived from previously published maps, which mostly ignored the results of contemporary geographical surveys (as cartographical accuracy was not his main aim). However, he chose to include up-to-date information about the political geography of Japan and about roads and sea routes within the country and to foreign lands – all elements that attracted the curiosity of his public. The map became one of the most prominent representations of Japan of its time and greatly influenced subsequent mapmakers.

One fine example of cartographic representation of a sacred area is the following map by Hashimoto Sadahide (1807-1873), titled Fujisan shinkei zenzu (Complete map of the true shape of Mount Fuji, Japanese 70). 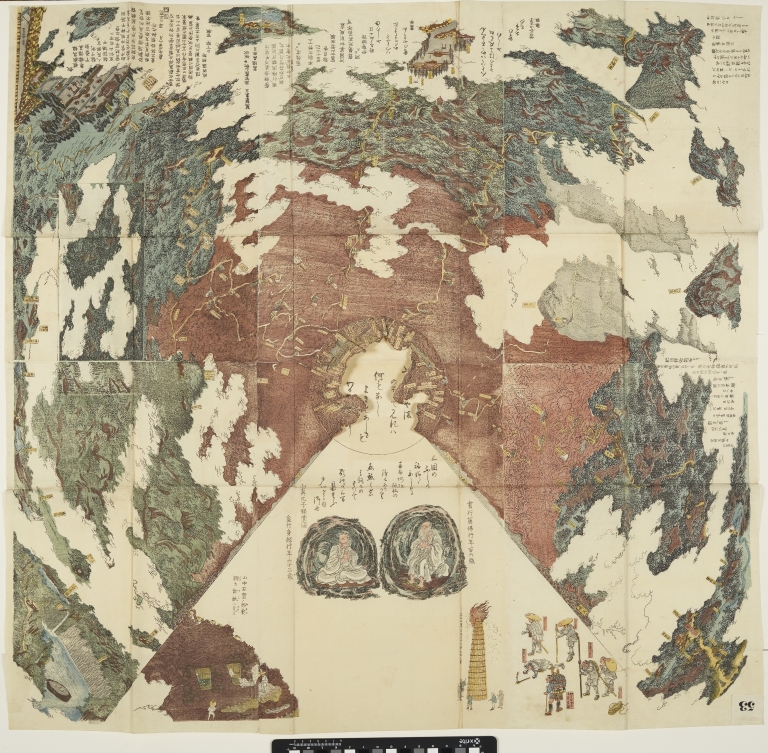 By the end of the Edo period, Mount Fuji, a long-revered religious site, had evolved into a cultural icon at the centre of a thriving travel industry. Fuji confraternities (fujikō) based in Edo (Tokyo) organized frequent pilgrimages to the mountain, and its Sengen Shrine was home to an annual fire festival (hi matsuri) that attracted many visitors. The mountain was therefore a common object of representation, both in art and cartography.

This specific map was commissioned in 1848 and distributed by the ritual performers of Fujiyoshida Sengen Shrine on the northern side of Fuji. It uncharacteristically represents Mount Fuji as seen from above, showing the different routes leading to the summit. It is heavily pictorial and represents pilgrims (near one of the big torches lit on the occasion of hi matsuri), as well as pilgrims’ lodgings, shrines, and locations sacred in the Fuji cult. The lower left section shows, for example, the Shiraito waterfalls (which were also a renowned place of scenic beauty), and a flap allows a glimpse inside the mountain, revealing an intricate system of caves that was part of the religious practices on Mount Fuji. The map stresses the spiritual nature of Mount Fuji by placing Kakugyō Tōbutsu and Jikigyō Miroku, two religious figures associated with the fujikō, within the crater. The triangular section representing the crater could be folded and the map assembled into a portable three-dimensional reproduction of the mountain – a “fashionable” souvenir.

Fuji is also thematically central in the following map by Akiyama Nagatoshi (active 1842-1843), titled Fujimi jūsanshū yochi zenzu (Map of the thirteen provinces from which Mount Fuji is visible, Japanese 29). 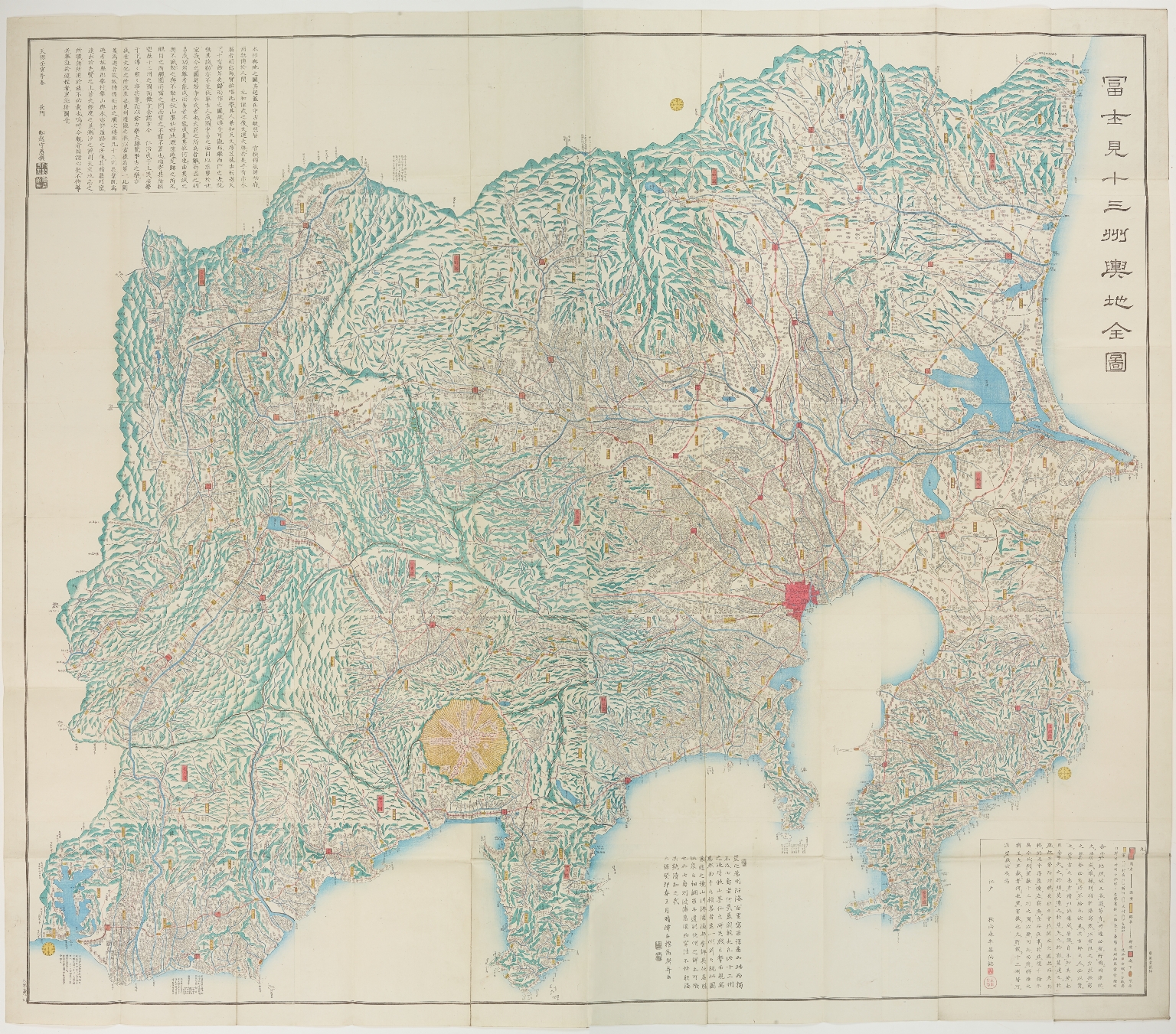 The map, published in 1842 and representing an area corresponding roughly to the Kantō region, was simultaneously a route map, a regional map, a provincial map, and even a very stylized city map for Edo,which appears, highlighted in red, in the right section. It shows the borders and names of provinces and districts, castle cities, villages, highways, checkpoints, post stations, lakes, rivers and mountains, temples and shrines, and other tourist spots such as hot springs, historical sites, and meisho (famous places). This attention to detail led to its popularity, and the map was reprinted many times until the end of the Edo period.

A similarly popular but iconographically very different map was the one created in 1690 by the cartographer Ochikochi Dōin (ca. 1628-1700) and the painter Hishikawa Moronobu (1618-1694), titled Tōkaidō bunken ezu (Measured map of the Tōkaidō Highway, Japanese 211).

Roughly 36 metres long, this map is a woodblock-printed and hand-coloured dōchūzu, or "on-the-road-map" that reproduced the 486 kilometres of the well-known (and loved) Tōkaidō. While based on an administrative map, it was probably intended as a tool for virtual travel rather than for practical purposes. It was heavily pictorial, with some elements of a guidebook following the 52 post-stations of the highway and showing distance markers, stone guideposts and checkpoints. It richly depicted life on the road and reproduced a number of famous landscapes.

These are just some of the items in the collection, regularly used in lectures and seminars at the University of Manchester. Most items can be consulted upon request in the Reading Room at the John Rylands Library. Researchers, and especially early career researchers, can also apply for funding for research projects to be carried out in the Library.

For the past five years, the Library has worked to make its Japanese maps more widely available in digital form. The first digitization project was launched in 2016, led by Dr. Erica Baffelli and funded by The Great Britain Sasakawa Foundation and The Japan Foundation. At about that time, I learned about the collection and successfully applied for a pilot grant at the John Rylands Research Institute. The couple of months I spent working on the maps allowed me to draft a more ambitious grant proposal and to obtain funding for the Marie Sklodowska-Curie Actions Project titled Travel in Tokugawa Period Japan (1603-1868): Identity, Nation and Social Transformation (2019-2021). As part of the project, I have been researching the maps, editing and expanding their descriptions, and collaborating with Julianne Simpson and Gwen Riley Jones at the John Rylands Library in order to complete their digitisation. On March 5, 2021, we launched the Japanese Maps Collection, in the Manchester Digital Collections platform.

Digitisation has also allowed us to keep engaging with the public during the pandemic with virtual events and blog posts. A small physical exhibition is in the works, but we also hope to be able to build a larger permanent online exhibition in the near future.

We invite people to get in touch with us and to explore our digital collection. The site is a work in progress, and new items are being progressively uploaded. We hope it will be of use to students, researchers, and map lovers around the world.