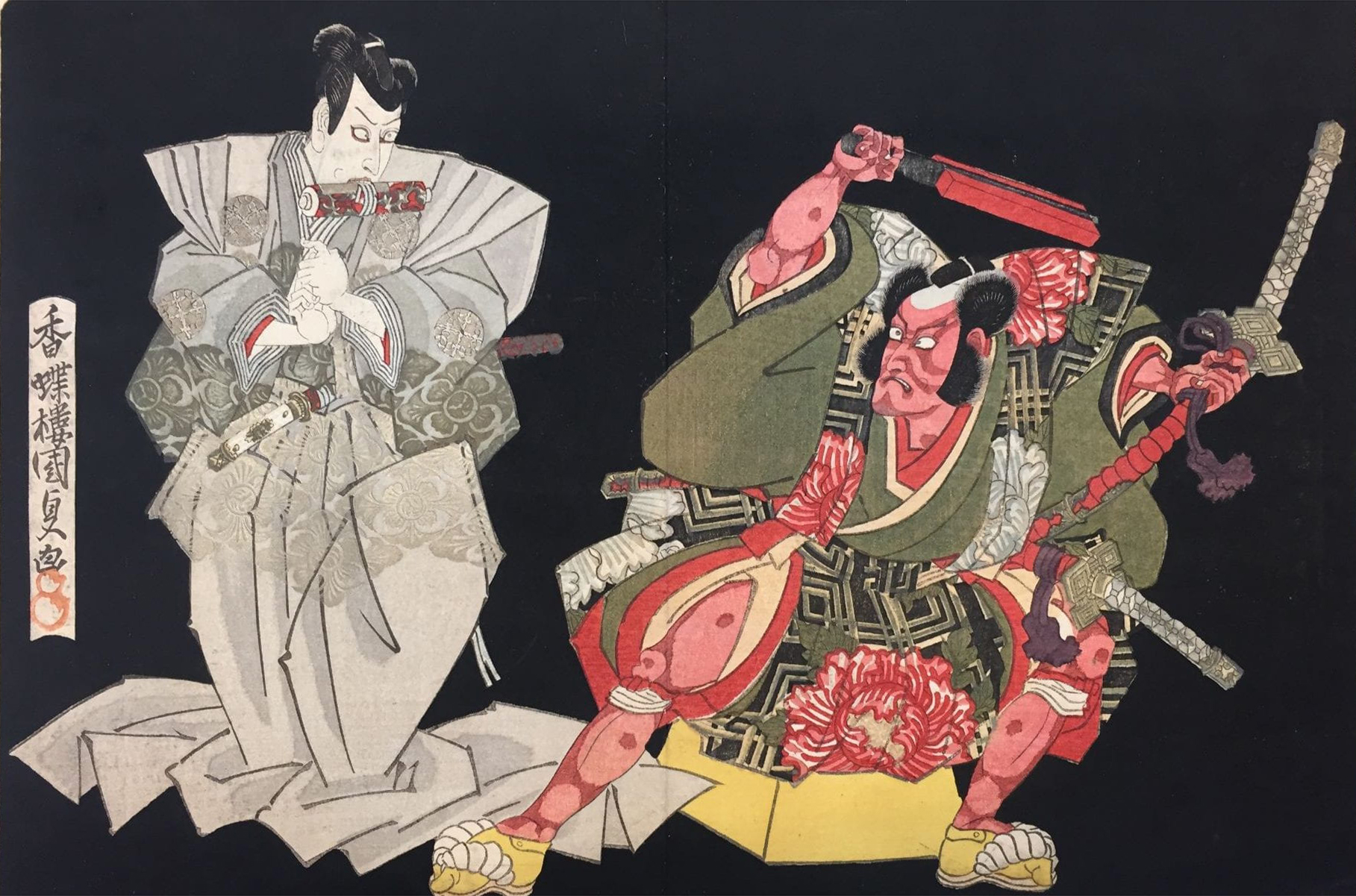 Collaborations among faculty, library staff, and students have played a vital role in developing the collections of the Penn Libraries from the very beginnings. ​​This tradition continues to this day in the Kislak Center for Special Collections, Rare Books and Manuscripts, where Professor Julie Nelson Davis and Kislak Senior Curator Lynne Farrington have been working together—with many generous donors—for over a decade to expand the Libraries’ holdings in rare Japanese print culture. Their work not only supports faculty research, but more importantly provides materials to share with students of Japanese history and culture at Penn and beyond. Here, they share how their project has also been vital in developing a spirit of collaboration and engaged learning.

Farrington, an expert in book history, has been an enthusiastic supporter of expanding the collection to become even more global in scope and of extending teaching across fields. But for Farrington the success of this project was due, as she writes, “ in large part to Professor Davis herself. Her enthusiasm is contagious, but unlike COVID-19 it can be shared without fear. Moreover, her superb publications—Picturing the Floating World: Ukiyo-e in Context (2021), Partners in Print: Artistic Collaboration and the Ukiyo-e Market (2014) and Utamaro and the Spectacle of Beauty (2007)—have been read by numerous American collectors of Japanese books and prints, inspiring them to reach out to her.” Davis adds that her appreciation for Japanese illustrated books was enhanced by learning how to present them, when she had the chance to oversee the Pulverer collection project from 2014 to 2017. While there, she also learned the art of cataloging premodern Japanese books. At Penn, she appreciates how library support allows her to teach from prints and books in the Kislak collection, transforming her students’ experience through “real things,” in collaborative studies of Japanese prints, the book in East Asia (with Professor Linda Chance), and curatorial exhibitions. "None of this would be possible," Davis adds, "without Lynne, Linda, the Library team in Japanese Studies, and the Libraries as a whole."

This wonderful faculty/library collaboration has meant that hundreds of Japanese prints and modern books about Japanese art have made their way to Penn and into the classroom. These recent gifts have now been complemented by the latest gift, an incredible collection of Japanese illustrated books from acclaimed photographer Arthur Tress, to be used by students and researchers from around the globe.

Renowned photographer Arthur Tress began collecting Japanese illustrated books in Kyoto in 1965, and he continues to do so today. Tress is well known for how he uses photography to tell stories, and he acknowledges that many of his photographs are inspired by his study of Japanese illustrated books. Among his most famous series is the hauntingly beautiful Dream Collector which juxtaposes elements of real life and staged fantasy. His work is in major public collections, including the Museum of Modern Art, Metropolitan Museum of Art, George Eastman House, Centre Georges Pompidou, Los Angeles County Museum of Art, Museum of Fine Arts, Houston, Whitney Museum of American Art, and Art Institute of Chicago. 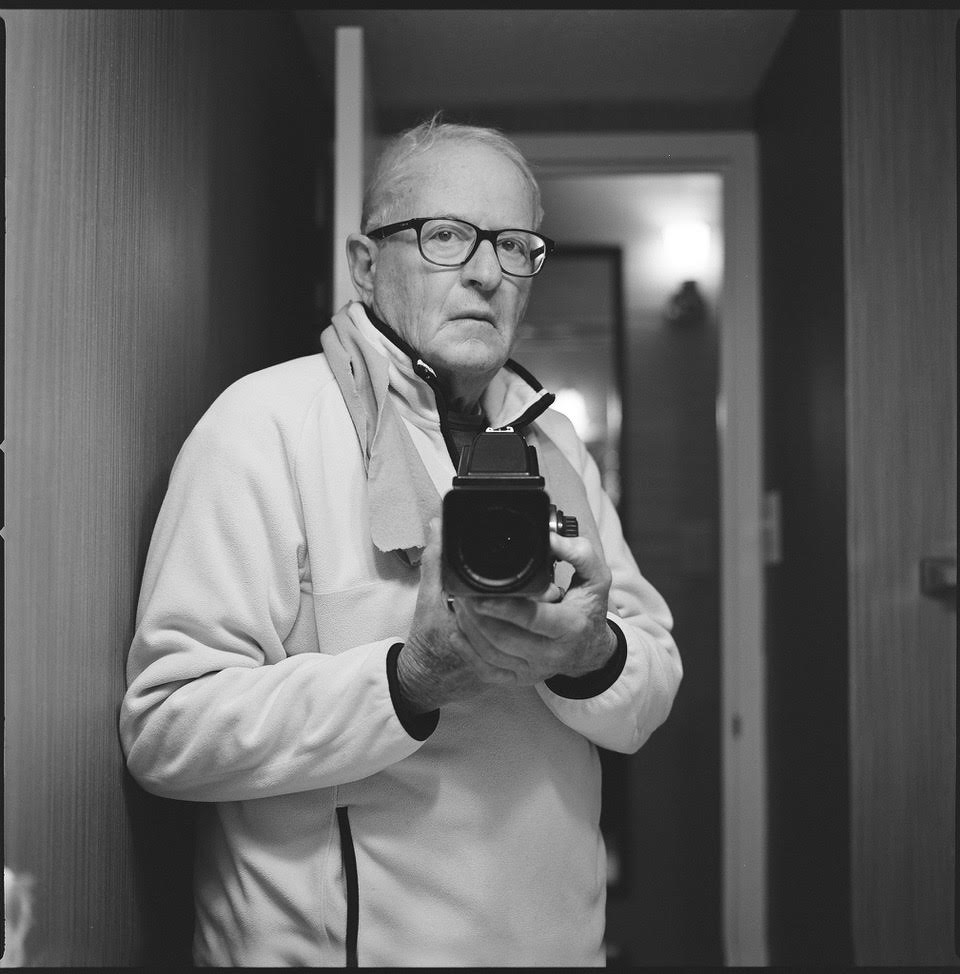 In 2017, Tress wrote to Davis with a note of appreciation about Partners in Print, and they began an email correspondence about his collection and their mutual appreciation for the Japanese illustrated book. In 2018, when he offered his extensive collection of more than 1,200 early modern and modern Japanese books to the University of Pennsylvania Libraries, Davis, Farrington, and colleagues in the Libraries and across campus were thrilled to accept it.

Davis and Tress continue to converse about Japanese illustrated books, as well as future projects, and Tress continues to collect in anticipation of a future donation to Penn. In 2020, Penn Libraries received a second gift: 2,500 Tress original photographic prints. This gift made the Libraries one of the largest holders of his work in North America. The donors of the photographs were inspired by Tress’s gift of the Japanese illustrated books and their generosity made it possible to study the two media in dialogue as well as Tress’s work more broadly.

Now known as the Arthur Tress Collection of Japanese Illustrated Books, the collection is one of the most complete of its kind in the United States, with examples spanning from the mid-17th century to the 1930s, and it covers every kind of book produced in the period. It includes novels in a variety of forms (such as kurobon, aobon, kibyōshi, gōkan), theater guides, poetry books (including kyōkabon and haikaibon), erotica (shunpon), painting study books (gafu and gashiki), travel guidebooks (meisho zue), shorter encyclopedias, books for children, exquisite editions of books on kimono design, as well as many more. It features exceedingly rare examples of hand-painted manuscripts (Nara ehon), a movable type tanrokubon edition, and several hundred books not held in Japanese or any other collections.

The collection includes titles from a who’s who of Japanese artists. Famous titles include acclaimed works such as Shusui’s Ise monogatari (Tales of Ise) (1767), Kawamura Bumpo’s Kinpaen gafu (Kinpaen’s painting album) (1820), Hōitsu’s Oson gafu (Drawing Book of Oson) (1816), Hokusai’s Fugaku hyakkei (One Hundred Views of Mt. Fuji) (1834), Ryūsui’s Umi no sachi (Treasures of the Sea) (1774), and others. Major artists and writers from across all genres are represented in the collection, including Hon’ami Kōetsu, Jippensha Ikku, Kamisaka Sekka, Takizawa Bakin, Tani Bunchō, Utagawa Hiroshige, Yamaguchi Soken, and many more. The collection includes multiple printings of several titles, allowing for comparisons of publishing practices and woodblock printing techniques over time. 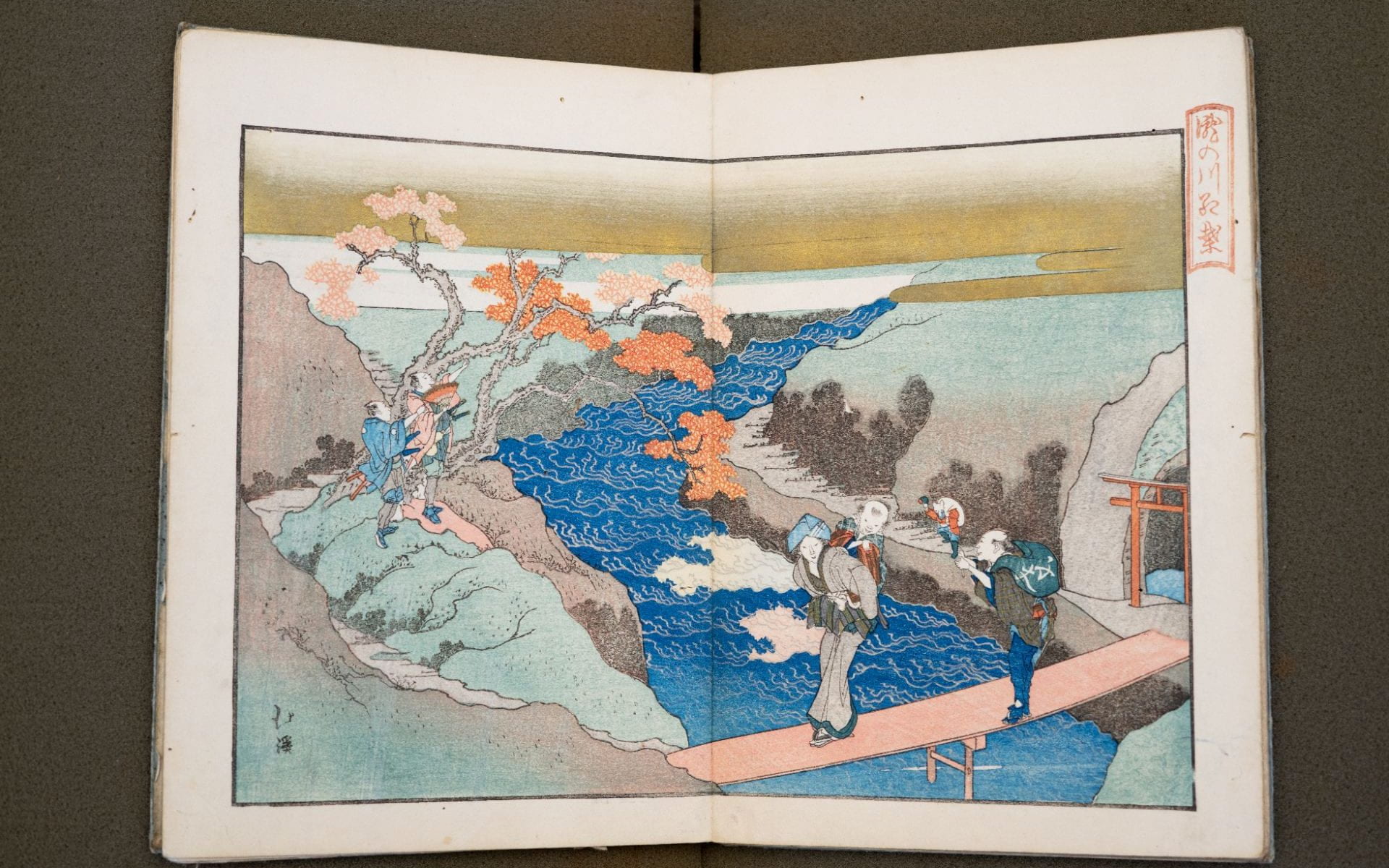 The collection includes masterworks equivalent to impressions held at some of the most highly regarded collections around the world, such as the British Museum, the Smithsonian, the New York Public Library, the Chiba City Museum of Art, and the Metropolitan Museum of Art. However, unlike many of the collectors who preceded him, Tress did not limit his interests to books regarded as “artist’s books” or to more elite productions. Rather, he collected widely, buying illustrated fiction, erotica, humor, and other works that present a much wider view of Edo publishing than seen in peer collections. Tress was inspired in his collecting by considering the creative, the innovative, and the deeply human as shown in the Japanese book. The collection is thus unique in the world.

With the Tress gift, Penn suddenly became an important site for the study of the Japanese illustrated book. The collection of Japanese illustrated books matches or surpasses any other held by a U.S. university. It is housed in the Penn Libraries, where it may be accessed freely, and it is already being used by students in undergraduate and graduate classes as well as in courses taught by Davis with the Rare Book School at the University of Virginia. 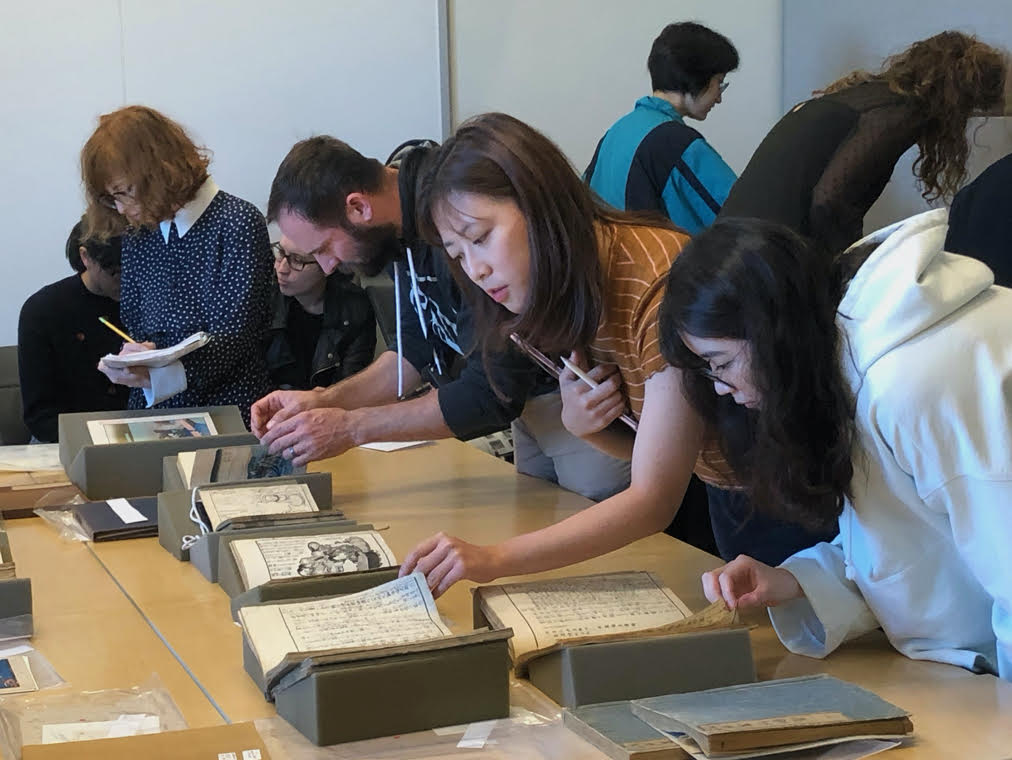 Davis has been working with students in two curatorial seminars and together they have selected works for an upcoming exhibition, slated for October through December 2022. Students made close studies of individual books, organized exhibit layouts, and produced a website featuring selected books as well as an essay about the experience of working as curators.

Their exhibit will include approximately fifty books and a number of Tress’s photographs, putting the photographer’s practice as a collector in dialogue with his work as an artist. In April 2022 scholars from Japan, Europe, and the Americas will convene for a public symposium to discuss selected works and issues related to the history of the Japanese illustrated book. Researchers can book sessions in the library to examine materials as well as request digital scanning services.

Penn Libraries has begun the work of processing the Arthur Tress Collection of Japanese Illustrated Books. When the collection arrived at Penn, it did not include a complete list of its contents. Over six short weeks, Davis and graduate students Naoko Adachi and Tim Zhang produced a list of artists, authors, titles, and dates for the purposes of appraisal, and library staff used this list to create basic records for the library catalog. Over the past year, library-faculty collaboration has continued, with Davis and colleague Linda Chance from East Asian Languages and Civilizations offering expertise to produce enhanced metadata for three hundred selected titles, working in consultation with Farrington and rare book cataloguer Jacqueline Parascandola. Library staff have digitized about one hundred of these titles as a pilot project.

Japanese Studies Librarian Rebecca Mendelson has recently joined the Penn Libraries and become an enthusiastic member of the team; together the team is working with colleagues in numerous departments to strategize plans for further processing the collection. This includes completing the cataloging, rehousing the collection, digitization, and making the collection discoverable and accessible through our online repository. All of this is an enormous collaborative project and very much ongoing. The Libraries will be seeking funding to assist in accomplishing this vital work, which has unfortunately been slowed by the pandemic. In the interim, we look forward to providing access in person to those who wish to consult materials in the collection. To learn more about the collector and the collection, you can view our recorded discussion between Tress and Davis about the gift and its history as well as visit the website for more information.