The digital exhibit “Popular Protest in Postwar Japan: The Antiwar Art of Shikoku Gorō” ” (2020) explores the vibrant grassroots arts and activist culture of Hiroshima through a case study of the art of Hiroshima native Shikoku Gorō (1924-2014) in the context of antiwar, antinuclear, and social justice movements from 1945 to 2020. The site guides visitors through the diverse art that Shikoku created, in collaboration with grassroots networks of artists and writers, to promote social justice: guerilla art protesting the Korean War, poems against the nuclear arms race, a children’s book about war, cityscapes critiquing Hiroshima’s wartime past, and recent performing arts that trace this activist history.

As a scholar, my goals were to curate an image-driven digital exhibit that makes broadly accessible, contextualizes, and analyzes a set of primary sources. The exhibit offers a collection of high-resolution images of Shikoku’s works (drawings, oil paintings, watercolors, poems, essays, books) along with photographs of historical settings and collaborators. Most of the historically significant physical objects that appear in digital form in the exhibit are in private hands. The Oberlin College Libraries website, therefore, provides a relatively stable platform for preserving and making accessible the collection of digital versions of artifacts that are mostly in Japan. I provided the digital images and the narrative but collaborated extensively with Oberlin College professional library staff Megan Mitchell and Cecilia Robinson, as well as Oberlin College student Max Mitchell ('20), on the design and use of the digital exhibition platform Scalar.

I was inspired by MIT’s Visualizing Cultures exhibit, another image-forward teaching tool on Asia, to create “Popular Protest in Postwar Japan” as an online project. Because of the availability of user-friendly platforms like Scalar, the Oberlin College Libraries were able to create this exhibit in-house, with the support of library professionals and an undergraduate major in computer science. I sought out knowledgeable collaborators in the libraries because I wanted to focus on scholarly interpretation and exhibit design, rather than spend time on building the exhibit on Scalar myself.

My larger objectives in this online exhibit were (1) to examine the ways that artists adapt their art activism in response to shifting historical conditions and changing audiences, and (2) to broaden the fields of postwar literature and visual arts to encompass such non-commercial, non-canonical activist art. What artistic strategies did Shikoku employ to sustain himself as an activist, despite the obstacles to nuclear disarmament, despite the slow pace of social and medical support for hibakusha (atomic bomb survivors), and despite the antidemocratic tendencies evident in postwar Japan? In this online site, we look locally, outside of the center, at the uses of art and literature to better society. Committed citizens in a democracy vote; they march in the streets and make their voices heard. They also make art because the arts can spark empathy and awareness, forge an emotional connection to neighbors and to strangers. The arts make visible systemic injustices and strengthen civic commitment and feelings of efficacy. The site can be visited casually as a museum exhibit about arts, activism, and democracy, or it can be adopted for classroom use in history, literature, art history classes. It also offers researchers an abundance of primary sources. 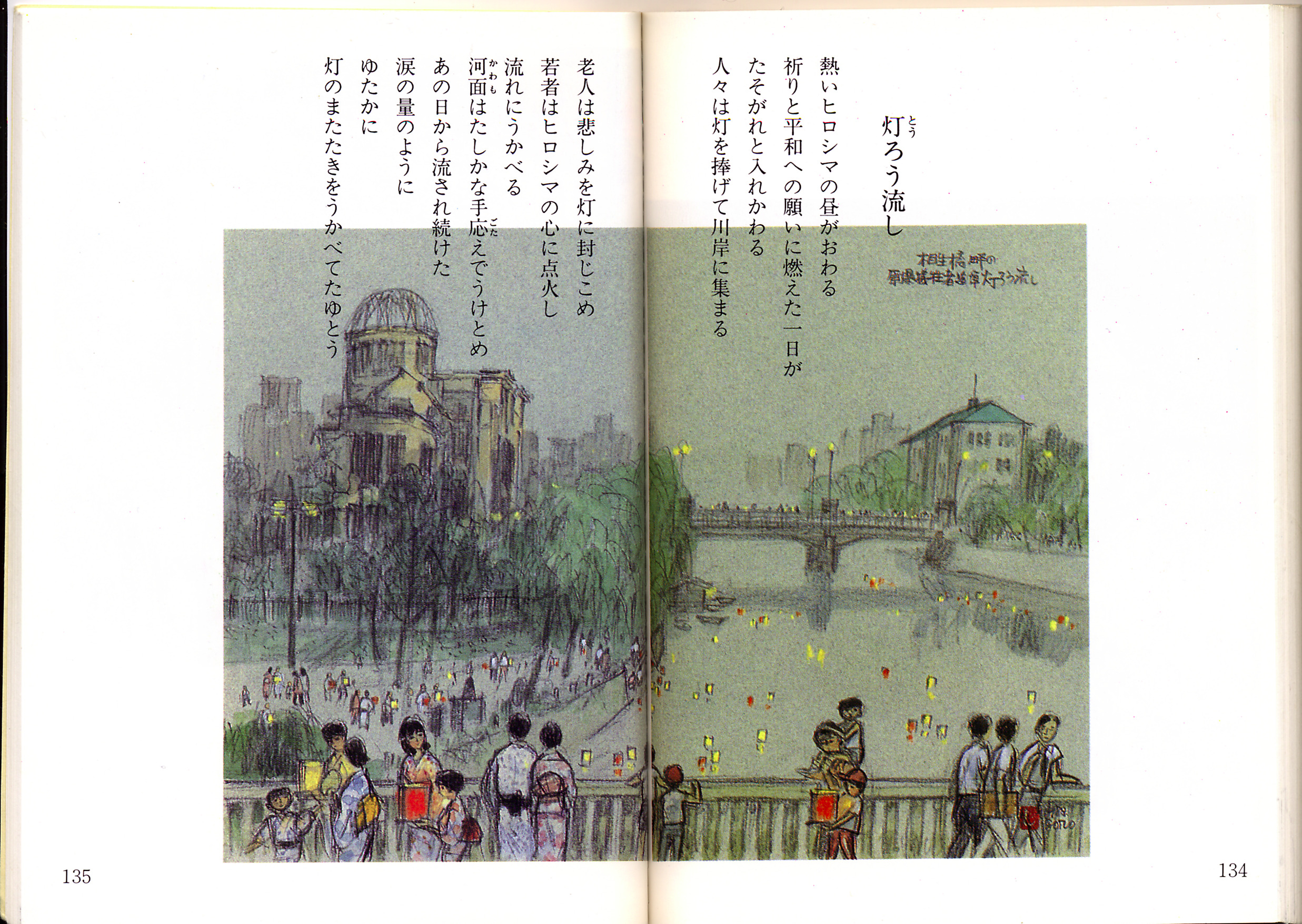 The digital exhibit is structured around three books to which Shikoku Gorō contributed. These books are presented chronologically and shown as physical objects. The earliest book Genbaku shishū (Atomic Bomb Poetry, September 1951) includes the poems of renowned Hiroshima poet Tōge Sankichi and illustrations and cover design by Shikoku Gorō. The Angry Jizō (Okori jizō, 1979) is a children’s picture book, with text by Yamaguchi Yuko and Numata Yōichi and cover design and illustrations by Shikoku Gorō. The third book, Hiroshima Sketches (Hiroshima no sukecchi, 1985), is a paperback combining images and essays about sites in the city of Hiroshima. Shikoku painted the watercolor images and wrote the text. To differing degrees, these three books address the atomic bombings of August 1945: the unimaginable moments of state-sanctioned violence during a time when such violence had become the norm at the end of a world war, marking the beginning of the nuclear age. The exhibit also features works in multiple media that relate to these 3 books, such as videos of live poetry readings, oil paintings, photographs, and works on paper.

In conceiving of this online exhibit, one priority was to convey materiality of the books as books, since a digital exhibit tends to flatten all images to 2 dimensions and to the size of the screen. The emphasis on the materiality of books highlights the idea of book objects as democratic in their portability and mobility during the pre-digital age. The physical form of books, furthermore, tells us a great deal about the times when they were made and read and how they were used. The exhibit examines the following elements of each book: the format, design, materiality, and content. I provide extensive historical context and analysis, emphasizing Shikoku’s collaboration with other activists and artists. In making these books, Shikoku worked in distinct and powerful ways to reach his audiences in their own times and positions. Through the sections on “legacy,” the exhibit also stresses the ways these powerful books continue to resonate with readers today.

Although self-trained, Shikoku adopted the habits and disciplines of professional artists. Working outside the art establishment and the art/literary marketplace, Shikoku painted in oil and watercolor, drew with ink and charcoal, wrote poetry and essays. He wrote frankly that he persisted in his expressive activities with political and ethical goals in mind, using art as a tool. The exhibit is designed to reflect Shikoku’s intentions and encourage the viewer to consider the format and materiality of the three books and other media. For example, the physicality of Atomic Bomb Poetry shows us Shikoku making choices that will touch readers on emotional and aesthetic levels, in order to get them to engage with the sensitive issues of war, violence and nuclear weapons. 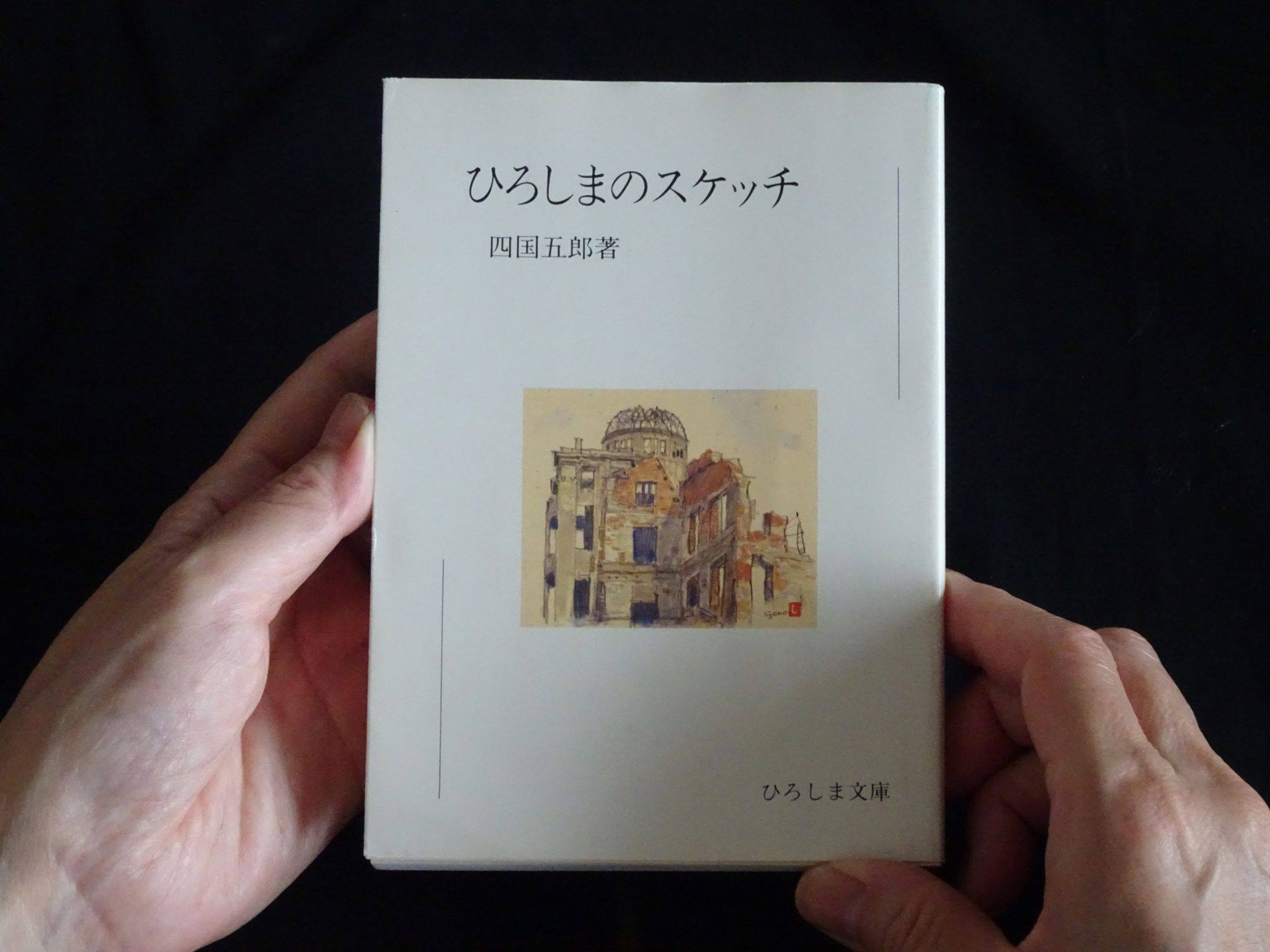 The photograph of someone holding the book Atomic Bomb Poetry in their hands (seen above) conveys the small size of the book, as well as the distinctive rectangular format. Shikoku chose a contemporary color palette to create a somewhat abstract, unsettling, and yet approachable cover design. In other words, Shikoku designed a book that was aesthetically interesting and an object that the reader could engage with intimately/covertly. The digital images convey the poor quality of the paper, and the use of Gariban, a form of low tech mimeograph printing. By taking control of the means of production and design of this first edition, the poetry circle could avoid the scrutiny of the Allied Occupation--when censorship had lightened but the authorities were still on alert--and of the Japanese authorities. 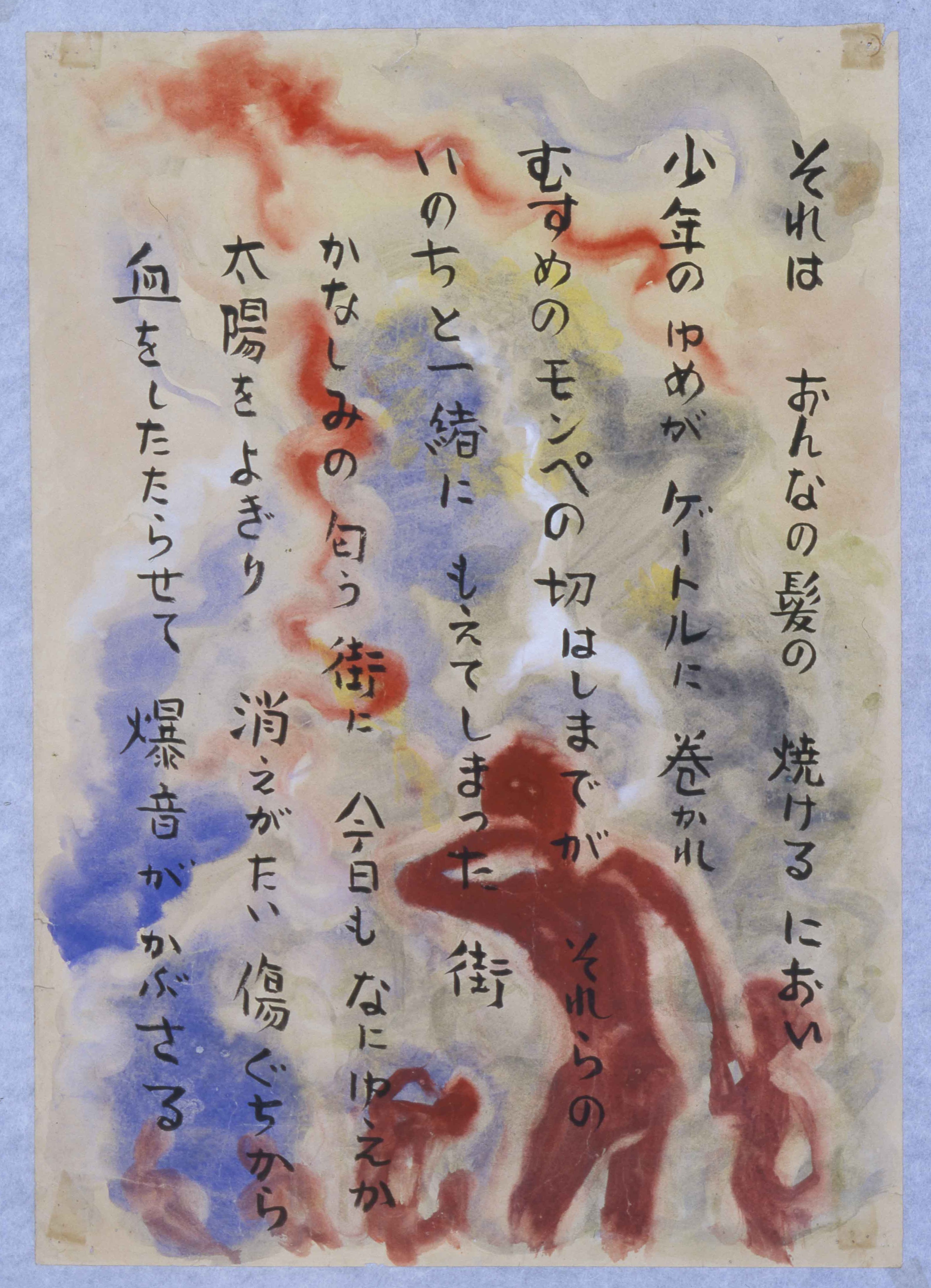 Another notable example of the circle’s public action is the young members working together, with Toge and Shikoku at the center, in a street poem posters (tsuji shi) project. Shikoku designed word/image posters by combining his own illustrations/graphic elements with poetry written by Toge or one of the other members.

Right: Tōge Sankichi and Shikoku Gorō. “It was the Smell of a Woman’s hair burning.” Steet poem poster. Watercolor on Paper. 1950-1953.

Shikoku switched up the design of each tsuji shi, sometimes using collage, sometimes painting. For one poster, he inked his boots and marched right over the paper. They are compelling examples of public art, specifically designed to get passersby to pause, learn about an issue, and do something. The street poem posters were also guerrilla in the sense that the artists could tear them down and run in case the authorities showed up. The extant tsuji shi are all in Japan in private hands.

The second book in the exhibit, The Angry Jizō, takes us forward nearly 25 years to 1979. This picture book for young children has been republished dozens of times. During the nuclear arms race, Shikoku responded to the call to illustrate a children’s picture book written originally by well-known children’s literature author Yamaguchi Yuko. In a troubling time, when Japan is “at war with many countries,” a young girl finds comfort each day in seeing the smiling face of a Jizō (guardian icon) in her neighborhood. On August 6, she is injured horribly, and finds her way through the rubble to the Jizō. Hearing the girl’s pleas for water and seeing the destruction, the Jizō smiles no more. He sheds tears into the girl’s mouth, but she does not survive. The angry Jizō’s head shatters into a million pieces.

The Angry Jizō was produced by a Tokyo publisher with a well-established line of children’s books. The format is large and rectangular, making it easy for adults and children to read side by side, or for an adult to read out loud to a group of children. The question of audience arises here: how does one fashion a picture book about atomic bombing for small children? For Shikoku, the bombing was not merely history. Even more than 30 years later, hibakusha still lived in fear that they might be affected by radiation poisoning, and the arms race and nuclear testing raged on. 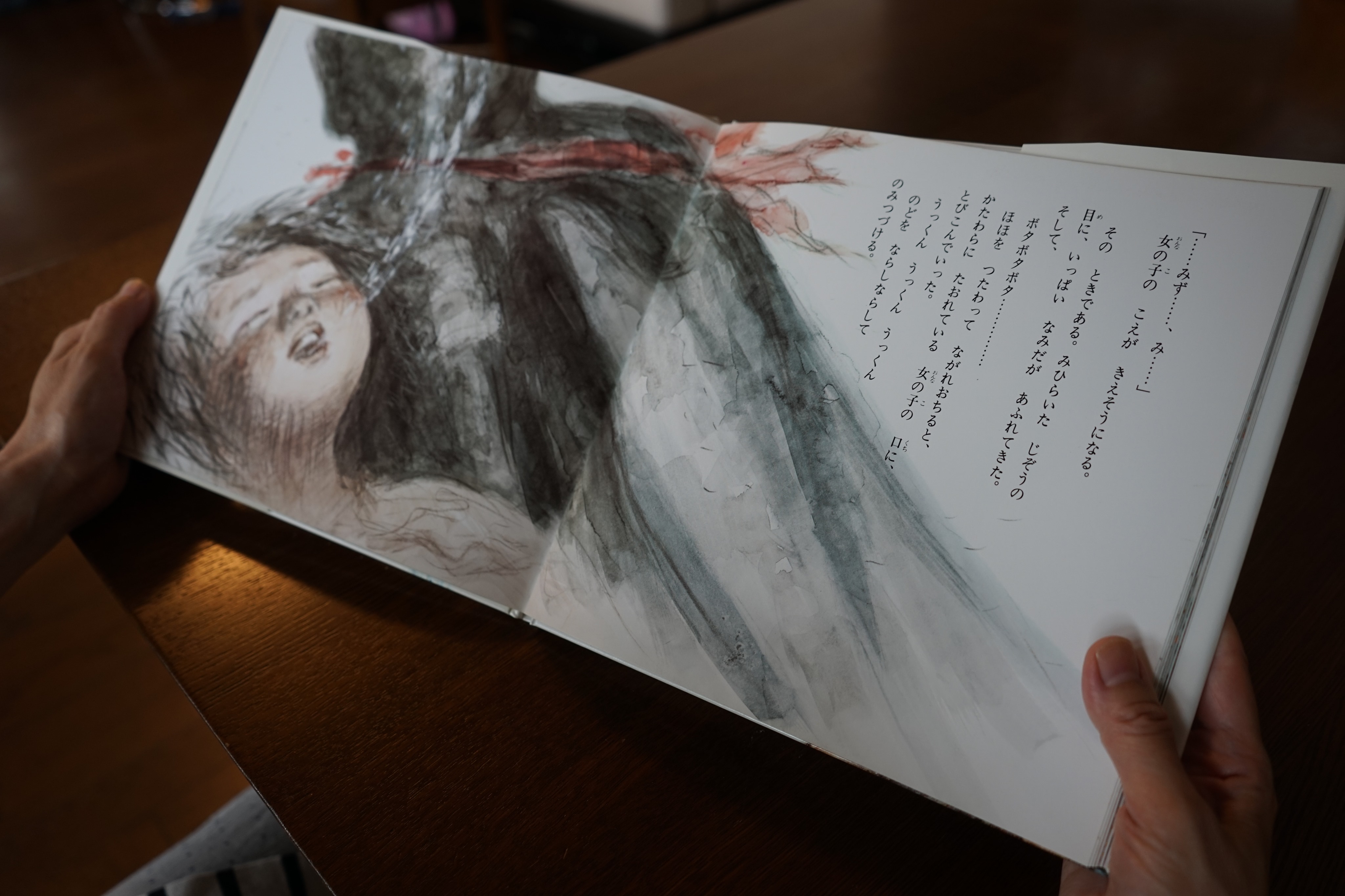 More recently, The Angry Jizō has found new audiences as contemporary activists have taken up a practice of doing dramatic readings of the book to children and to adult audiences. Most prominent among these is actress Kiuchi Midori. The digital exhibit includes a short video clip of Kiuchi’s compelling readings of Okori Jizō in Hiroshima in 2019. Like Shikoku’s earlier works, The Angry Jizō emerged from a creative collaboration among a group of people committed to the idea of peace education. This section of the exhibit about The Angry Jizō can be used for teaching about peace education in Japan and the notion of “nuclear allergy.”

I will briefly touch on the third and final book of the exhibit, Hiroshima Sketches. In anticipation of the 40 anniversary of the end of the war, Shikoku compiled sketches and watercolors of the city and combined them with short essays and poems. The book, a small paperback format, starts with a “welcome to Hiroshima” to the reader. Shikoku takes us through the Peace Park—the sole destination in Hiroshima for many tourists—but then guides us away to see the rest of the city, evoked in attractive watercolors that establish a sense of place. The copiously illustrated book gives us a feeling of the many rivers and bridges, spaces important in the daily life of the city. As pretty and nostalgic as many of the images in Hiroshima Sketches may seem, Shikoku strategically matches images with text in order to convey the layered history of each place.

Of the large body of works that Shikoku created over his long career, I chose the three books to structure the site because they are the easiest to situate historically in relation to social movements, audiences, and use. The three books included in the exhibit—like other books and journals, which Shikoku illustrated and drew the covers—were intended to have a public existence and a broad social life and function. It is my hope that this “Popular Protest in Postwar Japan” exhibit will serve as a resource for teachers, students, and scholars interested in social movements, art and politics, and democracy.