In a recent hands-on session at Duke University’s David M. Rubenstein Rare Book & Manuscript Library, undergraduate and graduate students had a chance to explore materials related to the visual expression of Japanese nationalism from the late Meiji through early Shōwa periods (1868-1935). Among the items assembled for the session, which included imperial biographies, photographs, stereoscopes, and wartime pamphlets, sugoroku 双六 appeared to interest students the most.

Sugoroku is a competitive race game that reached widespread popularity during the Edo period (1603-1868) and involves a printed paper “board,” dice, and movable pieces. Each sugoroku typically focuses around a central theme regarding society, travel, religion, or a current event. At a basic level, players begin on a starting square, roll the dice, and move accordingly around the board, and the first player to reach the end of the circuit wins the game. Some forms of sugoroku allow “jumping” other players or branching paths, while others proceed unidirectionally and only according to the dice roll. Sugoroku are often compared to Snakes and Ladders (or Chutes and Ladders), which also involves dice-rolling and player progression from a starting square to a finishing square. 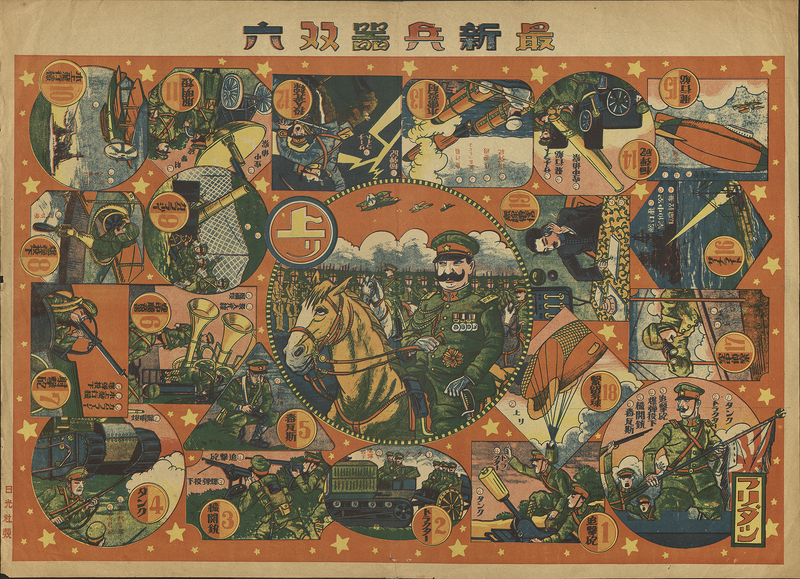 Sugoroku are bright, colorful, large-scale items with visual hierarchies and movements that demand attention. As students stood around the Cutting-edge Weapon sugoroku (Saishin heiki sugoroku 最新兵器双六, ca. 1910s-1940s) during the hands-on session, some remarked on the juxtaposition between military imagery and the cartoonish aesthetic, while others asked about the function of sugoroku in the postwar era. Others still asked about connections between the illustrations and early forms of manga. Perhaps more than other types of visual material on display that day, sugoroku communicated to students the intimate relationship between design, interactivity, and some of the social and political mores across Japan’s contemporary history. 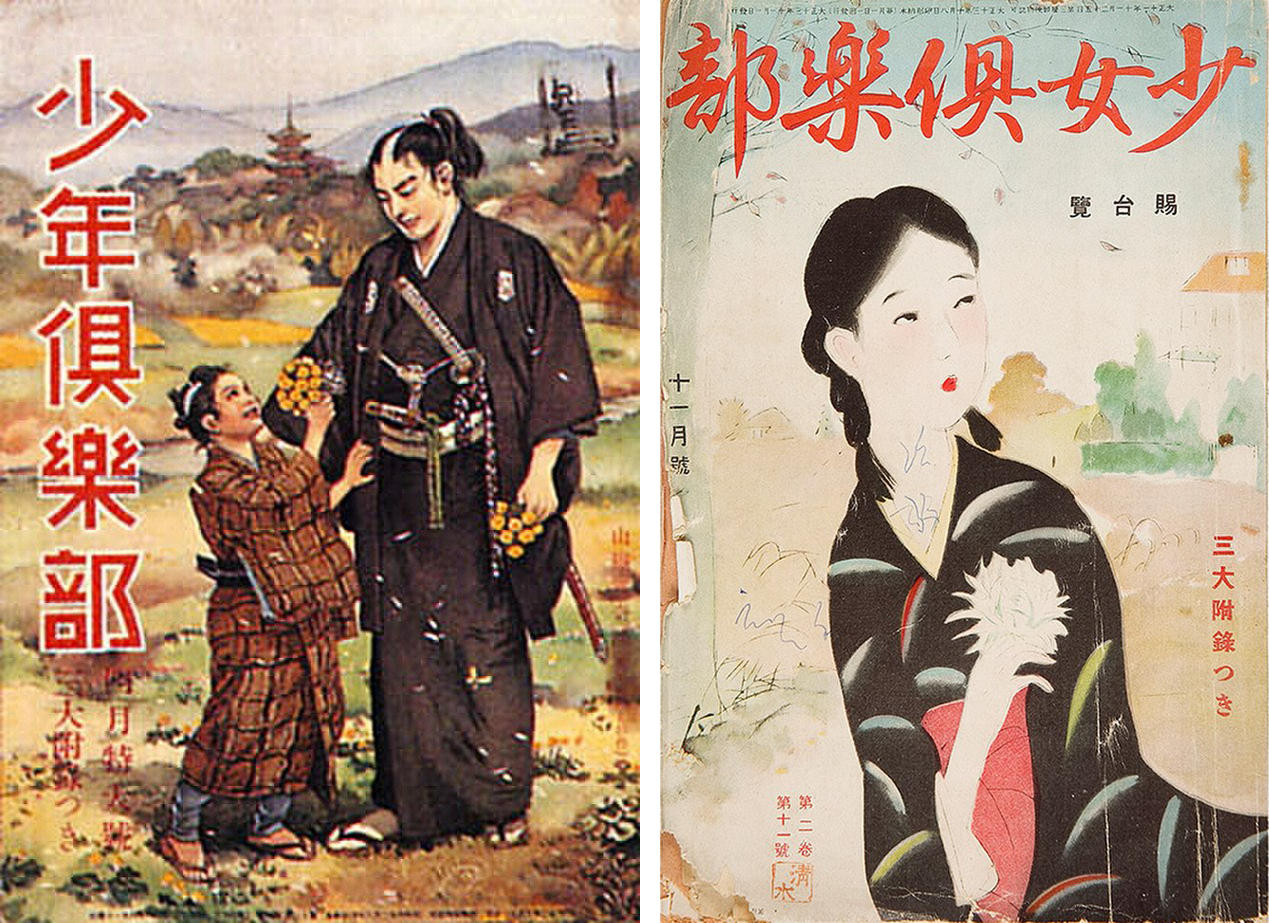 Since their early use, sugoroku have been both interactive and didactic insofar as they are meant to impart a moral or social maxim to the players, who were usually children. Similar to the American board game LIFE, which communicates to children social ideals of economic success, occupational status, and family growth, the traversal of sugoroku players across illustrated geo-political and social spaces also functioned similarly.

During the Edo period, the sub-genre of “worldly success sugoroku” (shusse sugoroku 出世双六), imparted, for example, ideals of femininity to young girls in accordance with social expectations of the time. During the Taishō and early Shōwa periods (1912-1940s), sugoroku were sometimes included as inserts in newspapers and children's magazines, such as Young Boys’ Club (Shōnen kurabu 少年倶楽部), Young Girls’ Club (Shōjo kurabu 少女倶楽部), and Young Boys’ World (Shōnen sekai 少年世界), and especially in issues published during the New Year.

This means that children were exposed to ideals and social qualities deemed valuable during each of these historical periods. This was especially true during periods of war or imperial colonization, which elicited an intense desire to foster nationalism among Japanese youth. As a genre of interactive printed material, sugoroku therefore provide a glimpse into the range of Japanese social and political values as they were communicated to children across critical moments in history.

Duke University holds roughly thirty sugoroku ranging from the late-Meiji through early-Shōwa periods, though with strong representation in the first half of the twentieth century. Duke began collecting sugoroku in 2019, which makes this collection fairly recent, though it has grown quickly and was featured just last year in an exhibit celebrating the thirtieth year of Duke’s East Asian Collection. Whereas some games rely on fictional world-building or complex rulesets that make them distinct, the stripped-down gameplay rules of sugoroku help to foreground the artwork and visual design as the primary means of conveying themes and ideas to the players. In this way, sugoroku dramatically complement many of the other interactive media held in Duke’s Rubenstein Library, which include games focused on social values, foreign conflict, historical conquest, the encouragement of gendered ideals among youth, and many others.

This collection could easily benefit scholars working on a range of topics and through several disciplines, including those working on the history of art or printing in Japan. Many sugoroku publishers commissioned very well-known artists to produce illustrations. For example, Tour Around Japan sugoroku (Nihon shūyū sugoroku 日本周遊雙六, 1896) features illustrations by ukiyo-e artist and printmaker Mizuno Toshikata 水野年方 (1866-1908), who was apprentice to the famous Tsukioka Yoshitoshi 月岡芳年 (1839-1892). 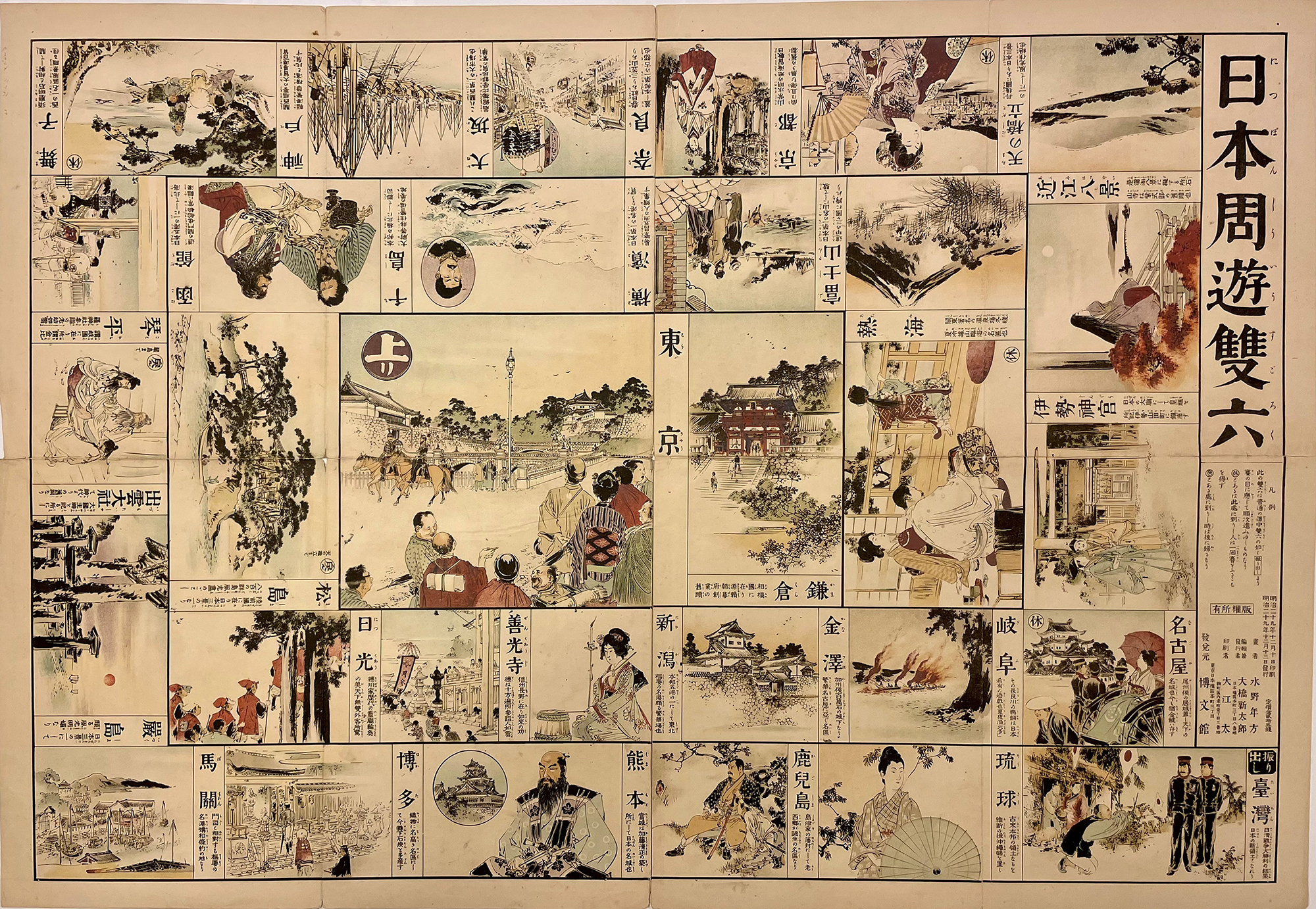 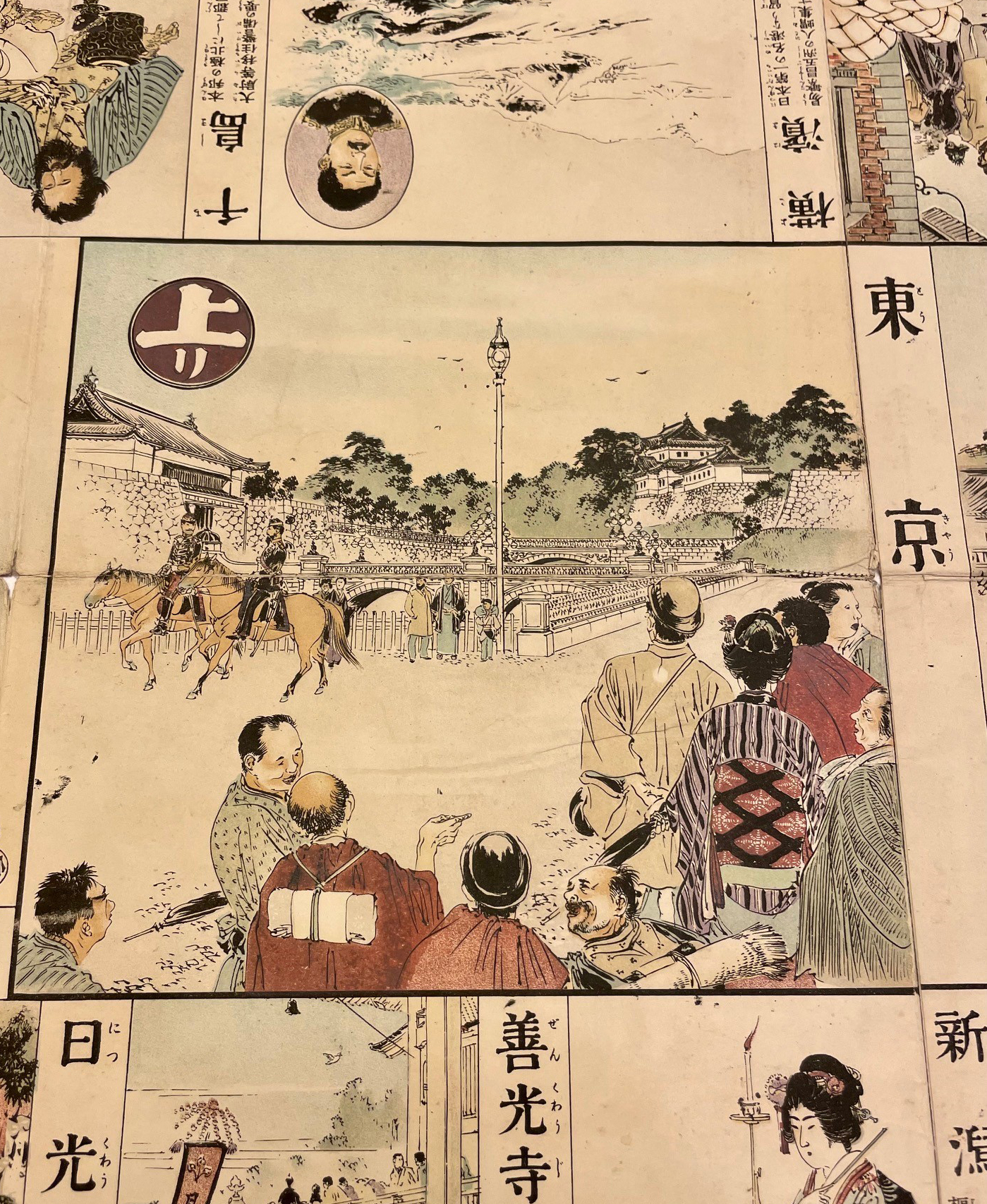 Mizuno was known best for his warrior portraits (musha-ga 武者画), portraits of beautiful women (bijin-ga 美人画), and depictions of historical events. His style, which is subtle and understated, comes through in his depiction of the various landmarks and scenic regions of Japan in this sugoroku, including Tokyo (the winning square, seen in detail to the left), Mount Fuji, and Itsukushima.

Note in the game board above that Taiwan, which China had ceded to Japan in the Treaty of Shimonoseki in 1895, is the starting square, and thus this sugoroku might be interpreted as a “tour” from Japan’s colonial periphery to its “center.” 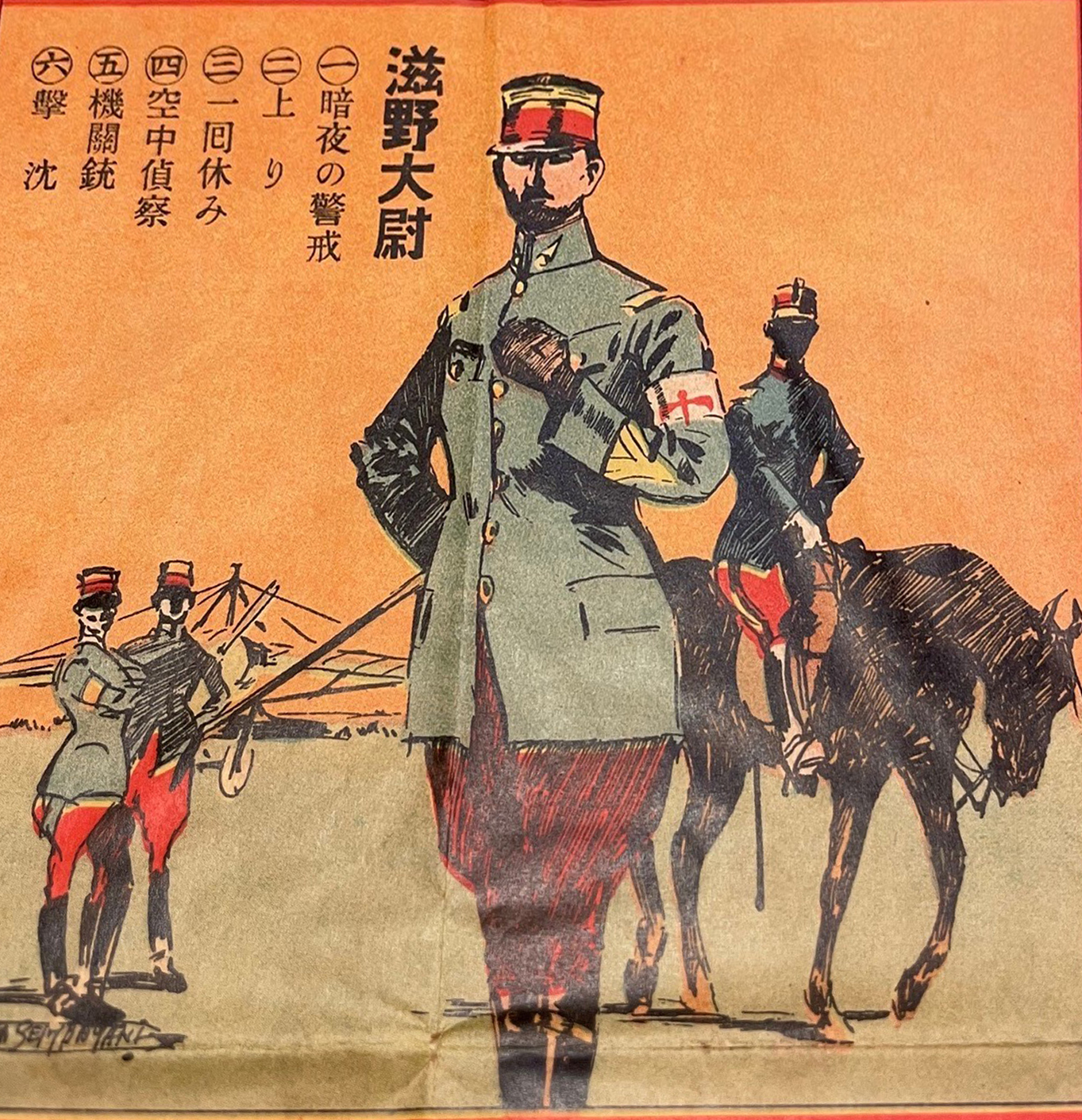 Tani specialized in warrior portraits and depictions of wartime events throughout Japanese history, but was best known for his illustrations of equestrian physique; Tani himself owned several horses, converted part of his home to a stable, and was commissioned for the 1927 edition of Equestrian Instructions (Bajutsu kyōhan 馬術教範).

This sugoroku gives a sense of Tani’s skill in a very different context, and is another among several examples of the commissioning of well-known Japanese artists and printmakers. The full National Military Aviation sugoroku board can be seen below. 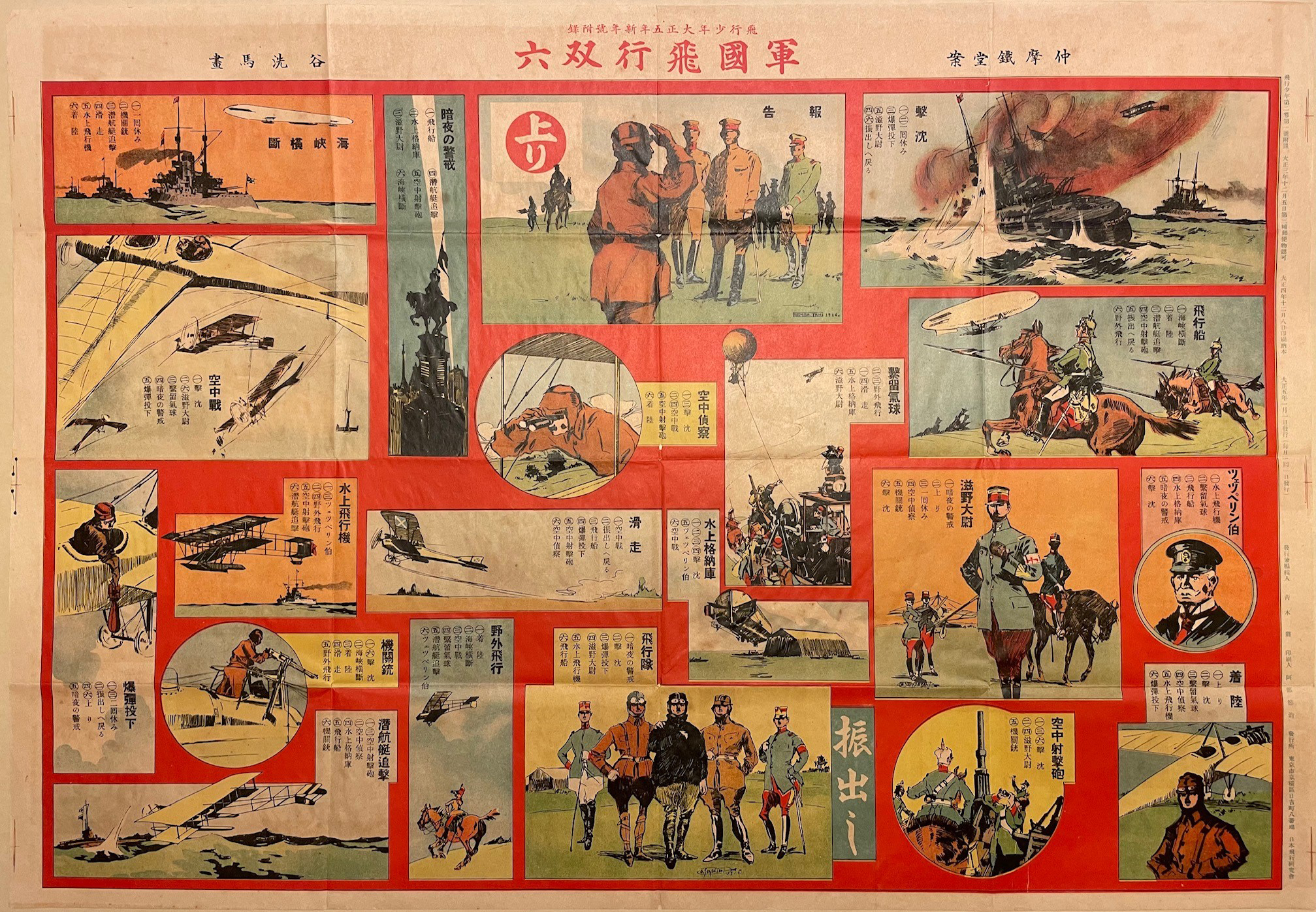 For scholars interested in Japanese history, sugoroku also provide a unique view of how Japan’s pivotal historical moments were represented to youth at the time. As described above, sugoroku capture the social and political perspective of Japan in a given historical moment, and scholars might look to interactive media like sugoroku to help signpost a series of historical events. The examples below are sugoroku that could clearly supplement the use of more traditional historical materials in research.

Airplane Competition sugoroku (Hikōki kyōsō sugoroku 飛行機競争双六, 1912), seen below, asks players to assume the role of a pilot and maneuver through one of two paths, one with favorable winds and another with unfavorable winds. In October of the year of this sugoroku’s production, Japan had accomplished its first flight in a Farman seaplane, much like the one depicted in the gameboard, which lasted fifteen minutes and took place at an altitude of thirty meters.

War Vehicles sugoroku (Sensha sugoroku 戦車双六, 1932) depicts some of the major advances in military technology with a focus on the prowess of tank armaments. As players advance to each new square, dice rolls determine which “action” is taken on the square, such as establishing a camp, consuming rations, or dealing with a tank breakdown. 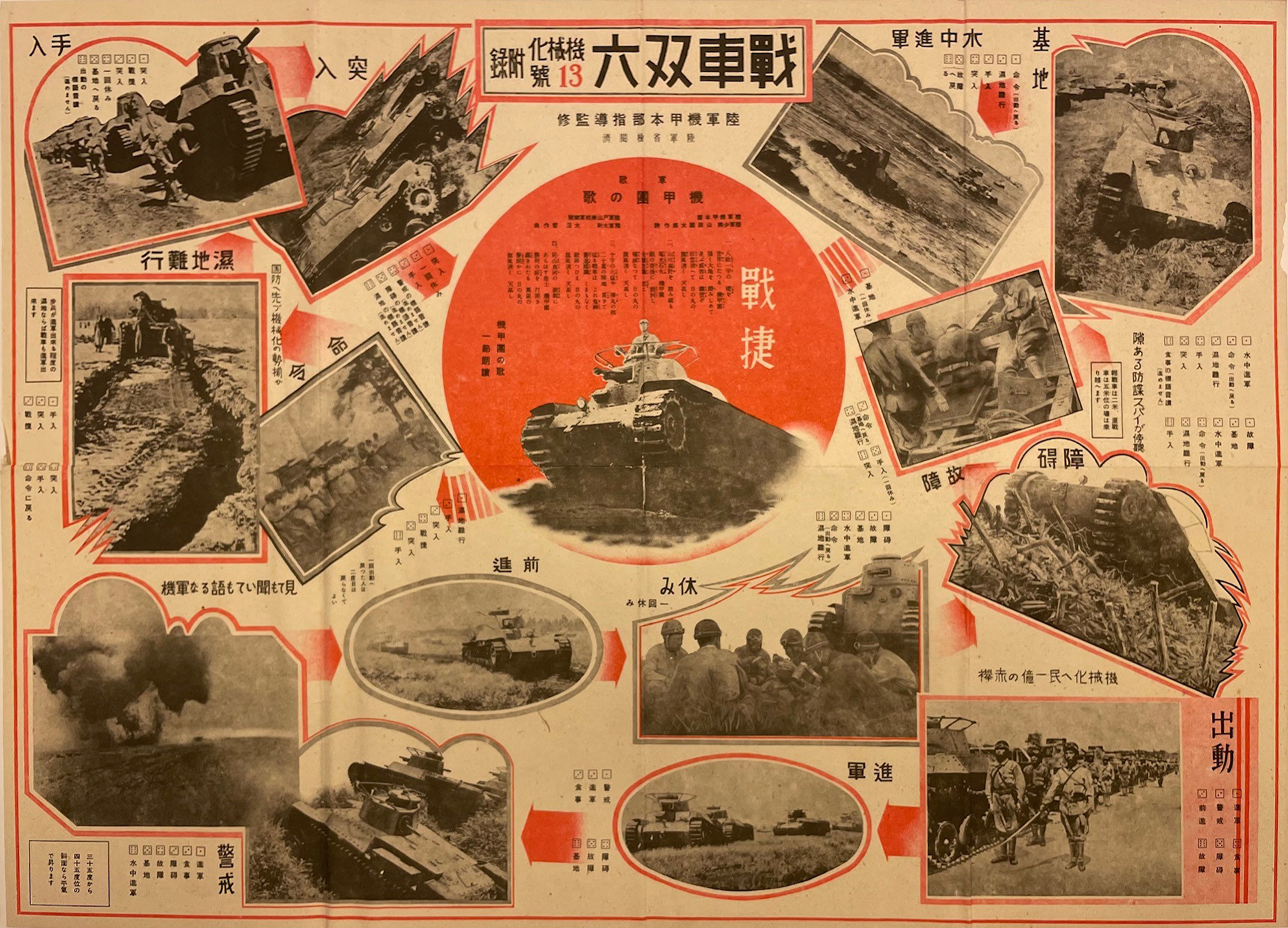 Atom sugoroku (Genshi sugoroku 原子双六, 1950) depicts four children who learn first-hand about nuclear discovery and related chemical and molecular processes. The game identifies itself as a commemoration of the Nobel Prize awardee Dr. Hideki Yukawa, who won in 1949 for his theoretical work on nuclear forces and who is pictured alongside Alfred Nobel at center. The game’s winning square advocates for the peaceful use of nuclear power. 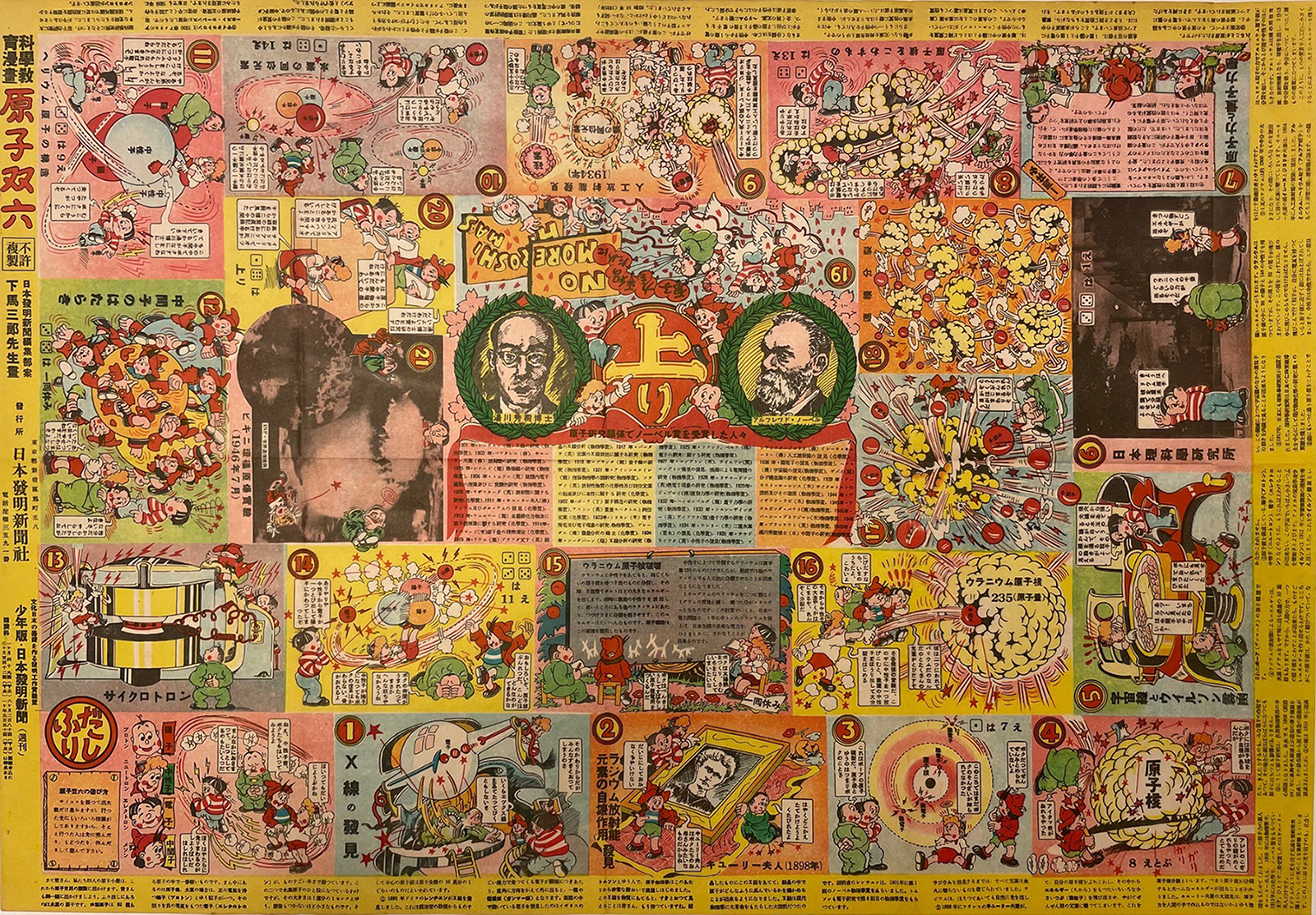 Savings sugoroku (Chokin sugoroku 貯金双六, ca. 1942) depicts frugality as a practical act in one’s life. Note here the visual analogizing between moments of [financial] emergency (the “enemy” soldier) and efforts to save money (the “victorious” soldier). Here, frugality is able to surmount such challenges.

These and other examples not only reflect an interest across time in representing Japan’s technological, militaristic, scientific, and social activities to a media-consuming public, but they also reinforce the fact that, for sugoroku publishers, games were deemed an effective way of appealing directly to Japanese youth. By playing sugoroku, children were able to imagine themselves as active participants in an unfolding history. This interactivity was part and parcel of instilling the social and political values deemed important at the time, and were perhaps equally or more effective than other, passive forms of learning. In this way, sugoroku played a role in shaping the worldviews of generations of Japanese youth.

The sugoroku collection is open to the public regardless of affiliation with Duke University. Patrons are advised to contact the Rubenstein Library website for more information about scheduling a visit and requesting materials at: https://library.duke.edu/rubenstein/about/visit. For more information and metadata on the sugoroku currently held at Duke, the collection guide can be accessed here: https://archives.lib.duke.edu/catalog/sugoroku. As Duke’s collection continues to grow, scholars are encouraged to take full advantage of the range of sugoroku currently held at its library. Sugoroku may complement other forms of primary resources in research and Duke’s collection offers a chance to explore how Japanese history is represented through interactive and didactic media.