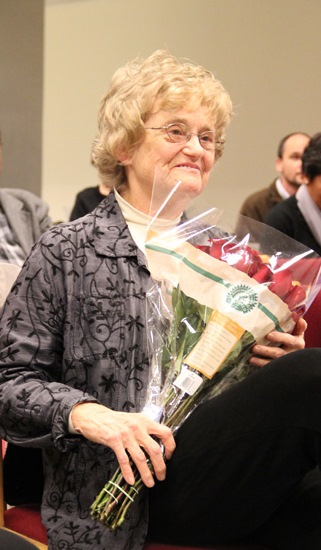 The Marlene J. Mayo Oral Histories are a collection of over 100 interviews with Americans who served or were present in Allied-Occupied Japan. Conducted by Marlene Mayo (Professor Emerita of History at the University of Maryland) and an associate, the majority of the interviews date from 1978 to 1992, with a few interviews conducted as recently as 2019. They were originally recorded on cassette tapes, all of which have now been digitized. Eighty percent of the interviews were transcribed soon after they were conducted, and the typewritten transcripts have been digitized as well. Marlene Mayo donated the interviews to the Gordon W. Prange Collection at the University of Maryland Libraries in 2011.

Left: Professor Marlene Mayo, honored for her donation of the Marlene J. Mayo Oral Histories to the University of Maryland Libraries, November 3, 2011

The Gordon W. Prange Collection is an archive of Japanese print publications published during the immediate post-World War II years (1945 - 1949), the first four years of the Allied Occupation of Japan. The materials that now comprise Maryland’s Prange collection were originally compiled for censorship purposes by the Supreme Commander of the Allied Powers (SCAP). When censorship was discontinued in 1949, Dr. Gordon Prange -- a professor of history at the University of Maryland, who, at the time, was working in Japan for SCAP -- recognized the value of these materials and arranged for their shipment to the University of Maryland. (See this video for an introduction to the Prange Collection.)

Although the majority of the Prange Collection holdings are Japanese-language publications, additional materials have been donated over the years, primarily by Americans who served or were present in Occupied Japan. These materials include photographs, slides, letters, documents, and oral histories that provide a view of Occupied Japan through the eyes of Americans, complementing the original archive and deepening our understanding of this pivotal period in Japanese history. 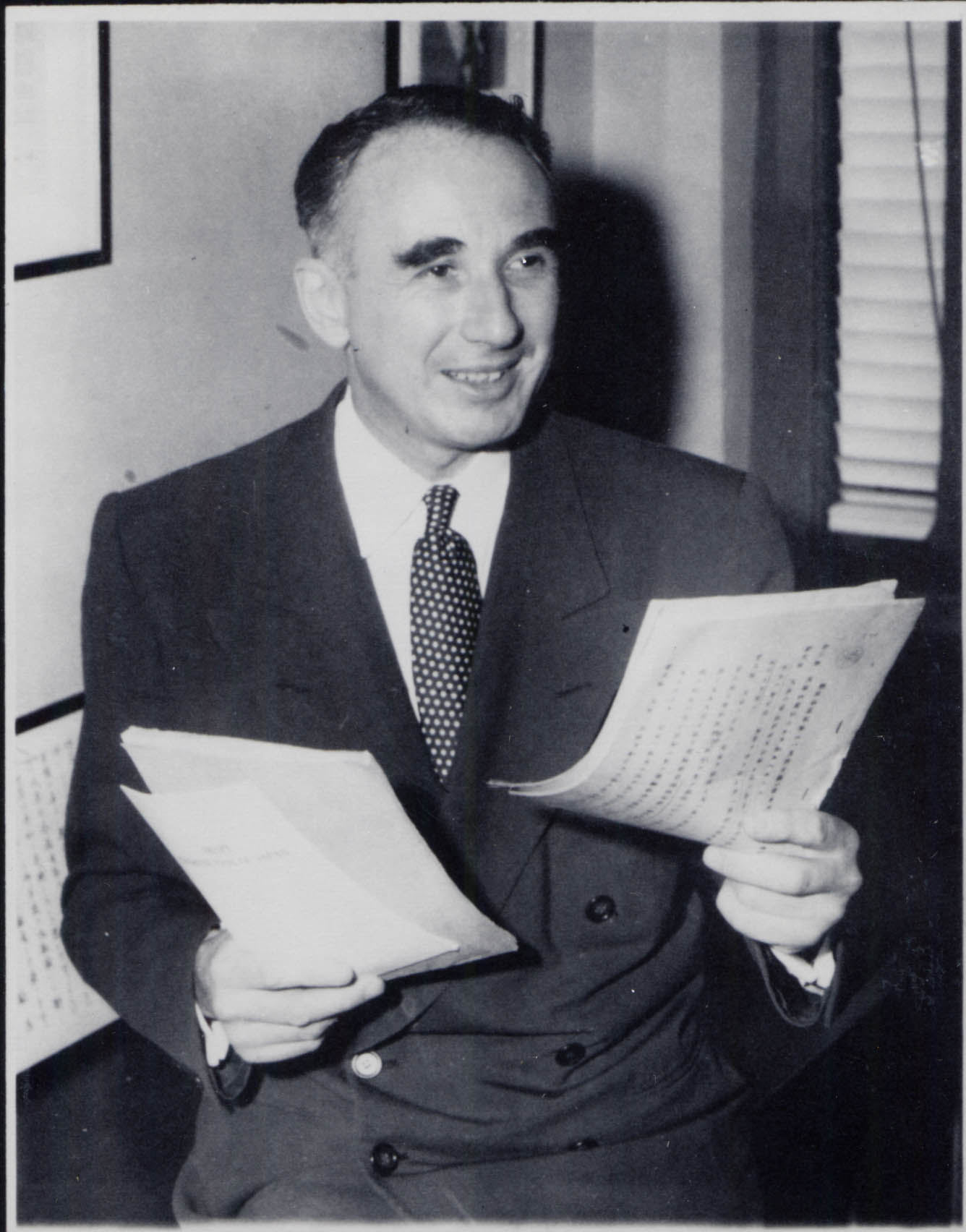 The interviewees in the Marlene Mayo Oral Histories participated in the Occupation of Japan in various capacities. They include a lawyer who was chief of the steering committee that drafted the new Japanese Constitution; a Nisei military officer, who was director of a Japanese-language training school whose graduates served in the Pacific or in the Occupation of Japan; a U.S. Naval officer who crafted the Shinto Directive issued in December 1945; a Nisei woman who returned to Japan prior to the Pearl Harbor attack and worked for GHQ/SCAP during the Occupation; and family members of American GIs. Many of the interviewees went on to become prominent Japanese or East Asian Studies experts in the U.S. government or in academia.

Right: Charles L. Kades, Deputy Director of the Government Section of SCAP and chief of the steering committee to draft the Japanese Constitution.

The oral histories total approximately 225 hours, with interviews as long as eight hours and as short as 30 minutes. Each interview begins with the person’s childhood and education before focusing on preparation for life and work in Japan. For many of the men, that would have included training at the Military Intelligence Service Language School at the Presidio and later at Fort Snelling, the Army Specialized Training Programs at Stanford and Yale, the Civil Affairs Training Program at Stanford, the Army’s Intensive Japanese Language School at the University of Michigan, and the Navy Japanese Language School at the University of Colorado in Boulder, among others. For many of the participants, this was their first exposure to the culture, history, and language of Japan. The remainder of each interview then addresses the interviewee’s role in the Occupation, whether that be in an official capacity or as a family member, and also covers home life, travel, entertainment, and interaction with Japanese residents. 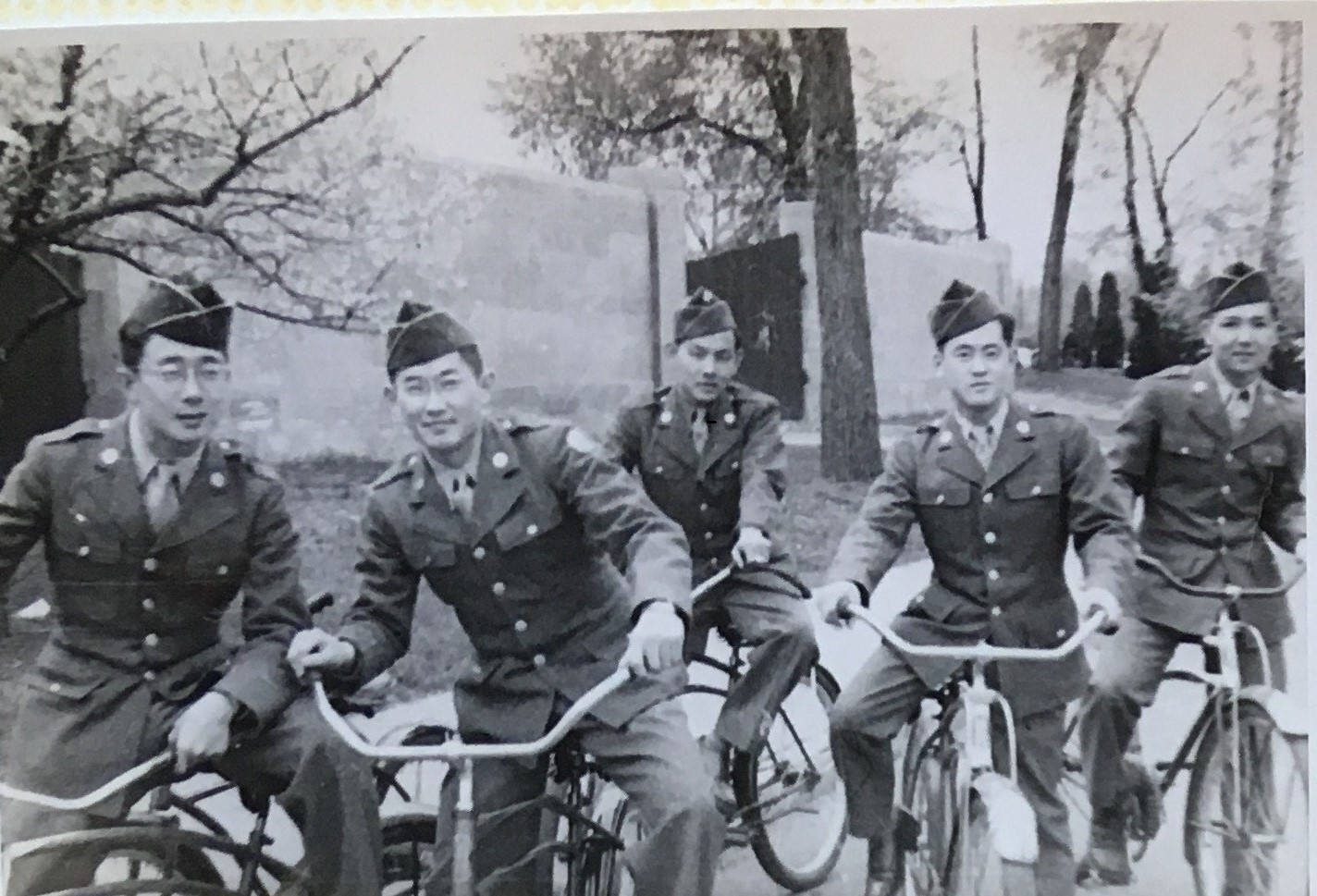 Key Kobayashi (second from the left), A Nissei GI who was confined to an internment camp during World War II
and then served as a member of the Occupation Forces in Japan.

The Occupation experiences of the eighteen women interviewed followed different trajectories than the men. Although a few had prominent positions in GHQ/SCAP, such as an economist charged with zaibatsu busting and a participant in the drafting of the Japanese Constitution, others served in administrative roles, such as secretarial positions. Still others accompanied their husbands who served in official capacities. One worked for the Red Cross.

As with many oral history collections, there have been impediments to providing access to and discoverability of the Marlene Mayo Oral Histories. Releases (permission to provide access and to reproduce) were secured from only one-third of the interviewees at the time that the oral histories were conducted. The remaining oral histories could not be shared freely or reproduced without that permission. In addition, many of the transcripts had been uploaded to a LibGuide, with the intention of eventually providing access through a finding aid in UMD Archival Collections. The finding aid would require a short biography of each interviewee. Those did not exist and would be too time-consuming for the Prange staff to produce.

At the suggestion of Professor Mayo, the Prange Collection partnered with the University of Maryland History Department to offer an internship for undergraduate history majors to secure the remaining releases and to write short biographies of the interviewees. The program began in fall 2014 and continued through spring 2016, with a total of five interns. The students secured 27 releases and completed short biographies for all of the 102 interviewees.

There is now a finding aid for the Marlene Mayo Oral Histories in UMD Archival Collections. The short biographies are there, as well as links to the transcripts. Soon, the audio files will be available there, too. 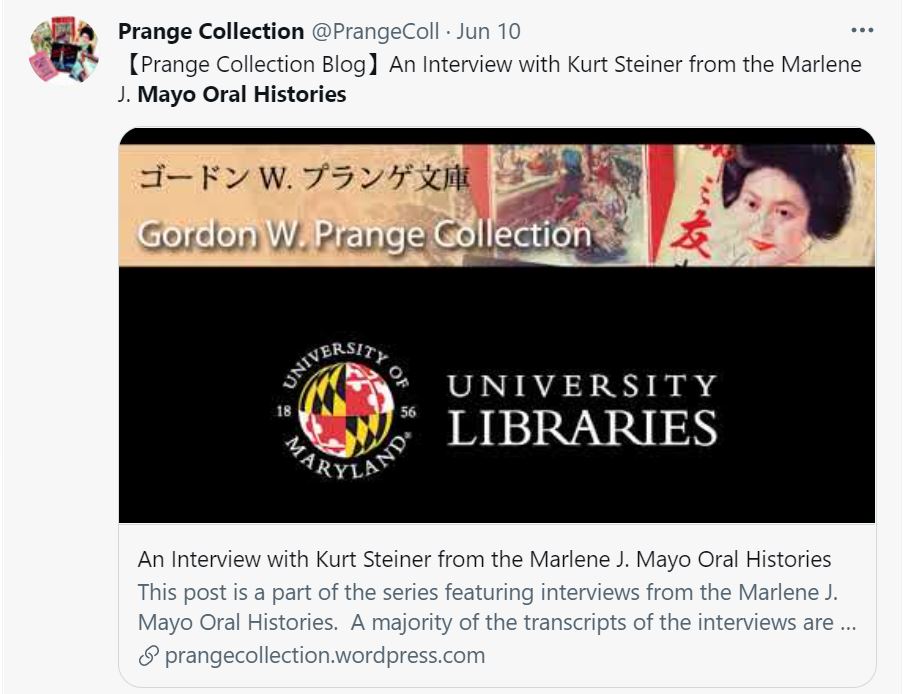 As the transcripts of interviews have become freely available online, we have focused on promoting the oral histories via the Prange social media platforms. We regularly feature interviewees on their birthdays on the Prange Collection blog (English and Japanese).

Since early 2020, we have used short audio clips from the interviews as teasers to encourage users to visit our website and explore the interviews in more depth. The clips are first uploaded to the Prange Collection YouTube account and then embedded in the Prange blog, Twitter, and Facebook feeds.

Transcripts are often easier for users to quickly scan for information and are the default for most scholars. The clips are a reminder that listening to the audio and hearing the interviewees speak is still an invaluable experience.

The Marlene Mayo Oral Histories are an invaluable resource for teaching as well as research. In Spring 2020, prior to the Libraries’ shutdown due to COVID-19, Kana Jenkins, Curator of the Prange Collection, held a one-time session for an upper-level history class entitled, “Telling War Stories: Using Oral History to Write Military History,” in which she utilized the Mayo Oral Histories.
The students were divided into three groups. Each group received an iPad with an interview excerpt that was five to seven minutes in length (audio file) and a short bio of the interviewee. The students were asked to do the following:

The main objective of the class was to give the students an opportunity to develop a research question using oral histories. During the exercise, the student groups successfully developed research questions and honed their skills in finding primary sources (the Japanese-American Museum and the National Archives, for example). With the oral histories as a starting point, students diversified their understanding of what is and what can be historical materials, while at the same time brainstorming together on research methods to help put those sources in context.

The Marlene Mayo Oral Histories are a treasure trove of information for research and teaching. Now that the transcripts are available and uploading of the audio is in sight, researchers across the globe can explore this rich collection -- vivid, personal memories of the Occupation of Japan. The UMD Libraries are committed to preserving and providing access to this unique resource.