The NCC is collaborating with institutions and scholars to release a monthly series on our blog entitled Japanese Studies Spotlight. These features showcase exciting online collections available to researchers and students in Japanese Studies, introducing the archive or project, describing their contents, and demonstrating how they can be usefully engaged in research or in the classroom. If you are interested in submitting something to the series, please contact Paula R. Curtis, NCC’s Digital Media Manager, at digitalmediamanager@nccjapan.org.

Kōgyo: The Art of Noh

As the preeminent graphic artist of the noh and kyōgen theatres, Kōgyo created approximately 700 Japanese woodblock prints; 60 paintings; 100 illustrations for Japan’s first graphic magazine, Fūzoku gahō 風俗画報; and many postcard pictures of noh and kyōgen plays from the early 1890s until his premature death in 1927. Kōgyo also produced paintings and prints of flowers, birds, and even wartime scenes, but he is best known and remembered for his theatre paintings and prints. 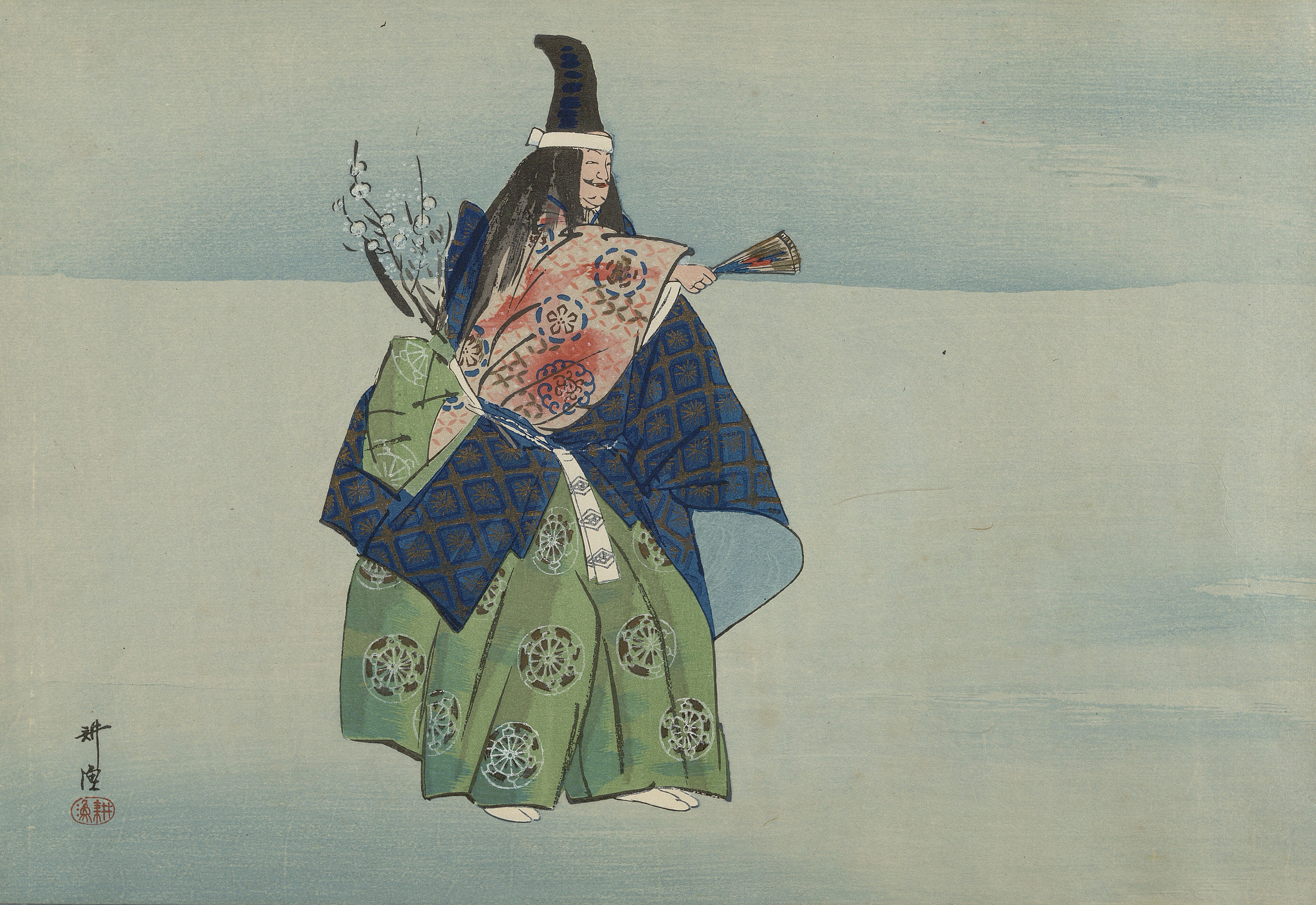 A theatre form that originated in fourteenth century Japan, noh 能 is a combination of dance and drama that plays on themes of both the supernatural and the natural. It was associated historically with the ruling warrior class, which made up about five percent of Japan’s population in the Edo period(1600-1868). But with the fall of the ruling warrior government and the movement to modernize Japan on the basis of Western models in the 1860s, noh also had to compete for audiences, not only with other kinds of traditional theatre, such as kabuki and bunraku, but also with a variety of new forms imported or adapted from outside of Japan.

Graphic representations of noh themes have been important to the revival of noh. The print artist Tsukioka Yoshitoshi 月岡芳年 (1839-1892) and to a much greater degree his stepson Kōgyo and, later, Kōgyo’s daughter Tsukioka Gyokusei 月岡玉瀞 (1908-2009) and disciple Matsuno Sōfū 松野奏風 (1899-1963) were key players in the modern popularization of noh. The publisher for Kōgyo’s prints, Matsuki Heikichi 松木平吉 of Daikokuya 大黒屋, sold them widely to the newly rich businessmen in Japan but also aimed to appeal to a foreign market from the beginning. Nohgaku hyakuban, for instance, was originally sold in sets of three prints each in envelopes with both Japanese and English-language descriptions. As a result, not only Japanese museums but also major European and North American museums and universities have holdings of Kōgyo’s prints.

Several books about Japanese theatre have been written in English and German and have used Kōgyo’s prints as illustrations. More recently, they were even used by a Japanese TV drama director in a broadcast TV drama, "Story of My Home" Ore no ie no hanashi 俺の家の話 (January 22 – March 26, 2021 on TBS), reflecting their enduring appeal.  In the drama "Story of My Home," the father of the main character is the head of a noh theatre school, and he uses a Kōgyo’s print to explain the noh play Sumidagawa 隅田川 (the print of which appears below) to his grandson. 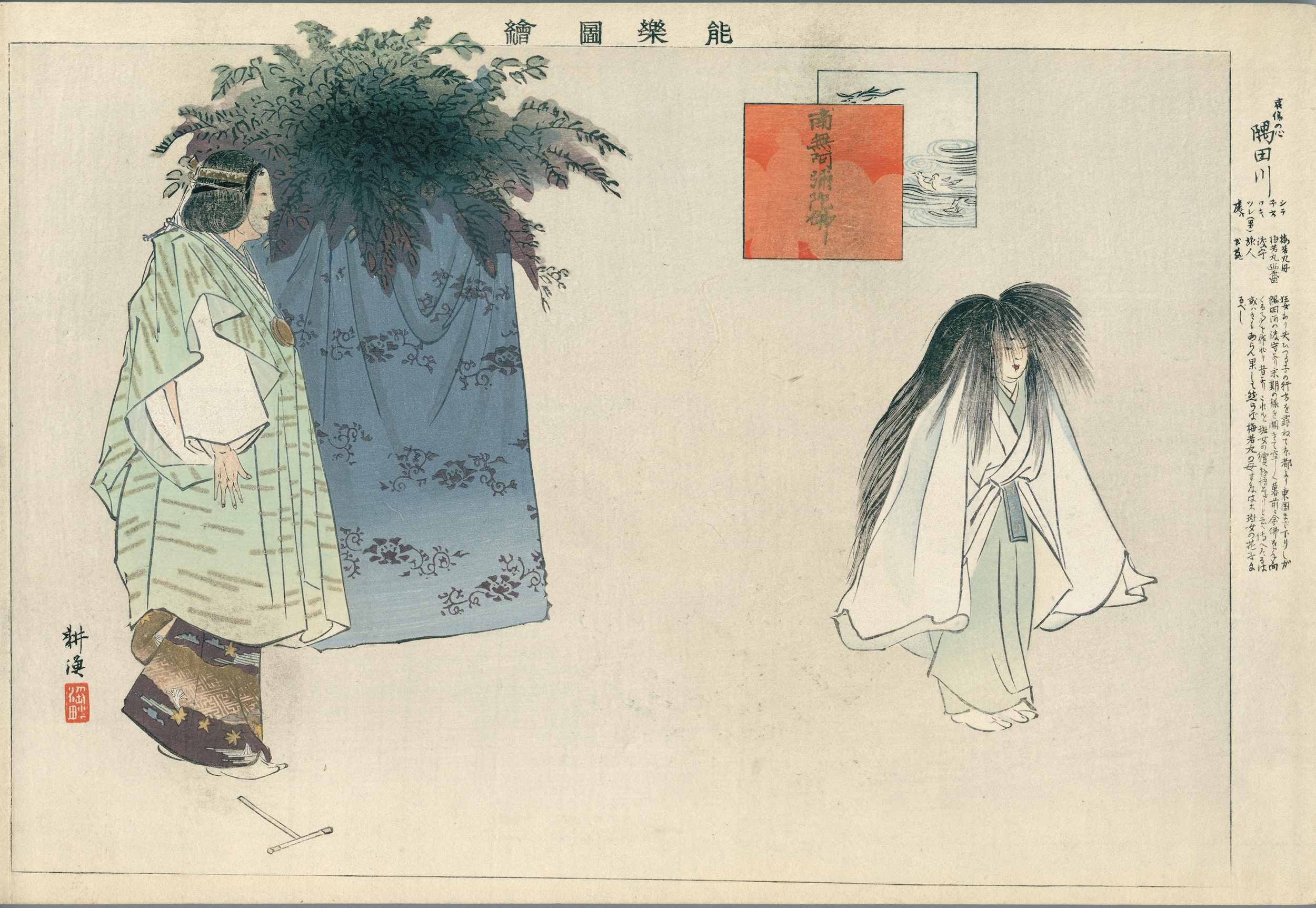 Kōgyo’s noh prints are more than reproductions of what he saw and sketched in the theater. He tried to capture what he saw as the essence of a play, which led him to make additions, subtractions, and various other changes to the actual performance in his prints. He even went so far as to put his ideas of the real-life facial expressions of the characters he depicted on the masks the actors in his prints wore. He also added to his prints scenes and texts from the stories of the play that are not portrayed on stage. Nōgaku zue and Nōgaku hyakuban show this characteristic prominently. In one print, Shōjō 猩々 (seen below), Kōgyo depicts an orangutan peeking from what is portrayed as a separate piece of paper; the orangutan does not appear on stage but is mentioned in the text of the play.

Kyōgen gojūban was published in Tokyo in 1927. It is an album of 50 prints inspired by kyōgen theatre, the comedic counterpart to noh, with prints produced by Kōgyo and his daughter, Gyokusei. The Pitt Library's Kyōgen gojūban is bound as one volume in folding album-format, which is in the manner of traditional Japanese orihon, or folding scrolls.

The Pitt site contains a general biographical essay on the artist and a translation of an essay that Kōgyo wrote himself, published in 1914. On the first page of each set, you will find contextual essays for the whole set and links to Browse & Search the prints within the set.

You can also visit our complete collection of Noh prints. This site contains 632 prints from four sets and 200 Japanese synopses with English summaries from Nōga taikan. In this site, you can search for various prints of the same play and compare them. Descriptions and metadata for each print and O’Neill’s English summaries help non-specialist and students understand more about prints and noh plays. For instance, you will find eight prints and four synopses of Soga-mono when you search “Soga” by “anywhere in record” (default). Soga-mono means noh, bunraku, and kabuki plays based on the tale of the Soga brothers, who avenged their father’s death in 1193. Among Soga-mono prints, there is Genpuku Soga 元服曽我, in which Gorō, a younger brother, has a ceremony that brings him to age as an adult so he can help in the revenge. In Kosode Soga 小袖曽我 (above), the brothers dance for their mother before going off to fight their father’s enemy. Then, in Yo'uchi Soga 夜討曽我, Gorō appears to kill their father’s enemy in a night battle. 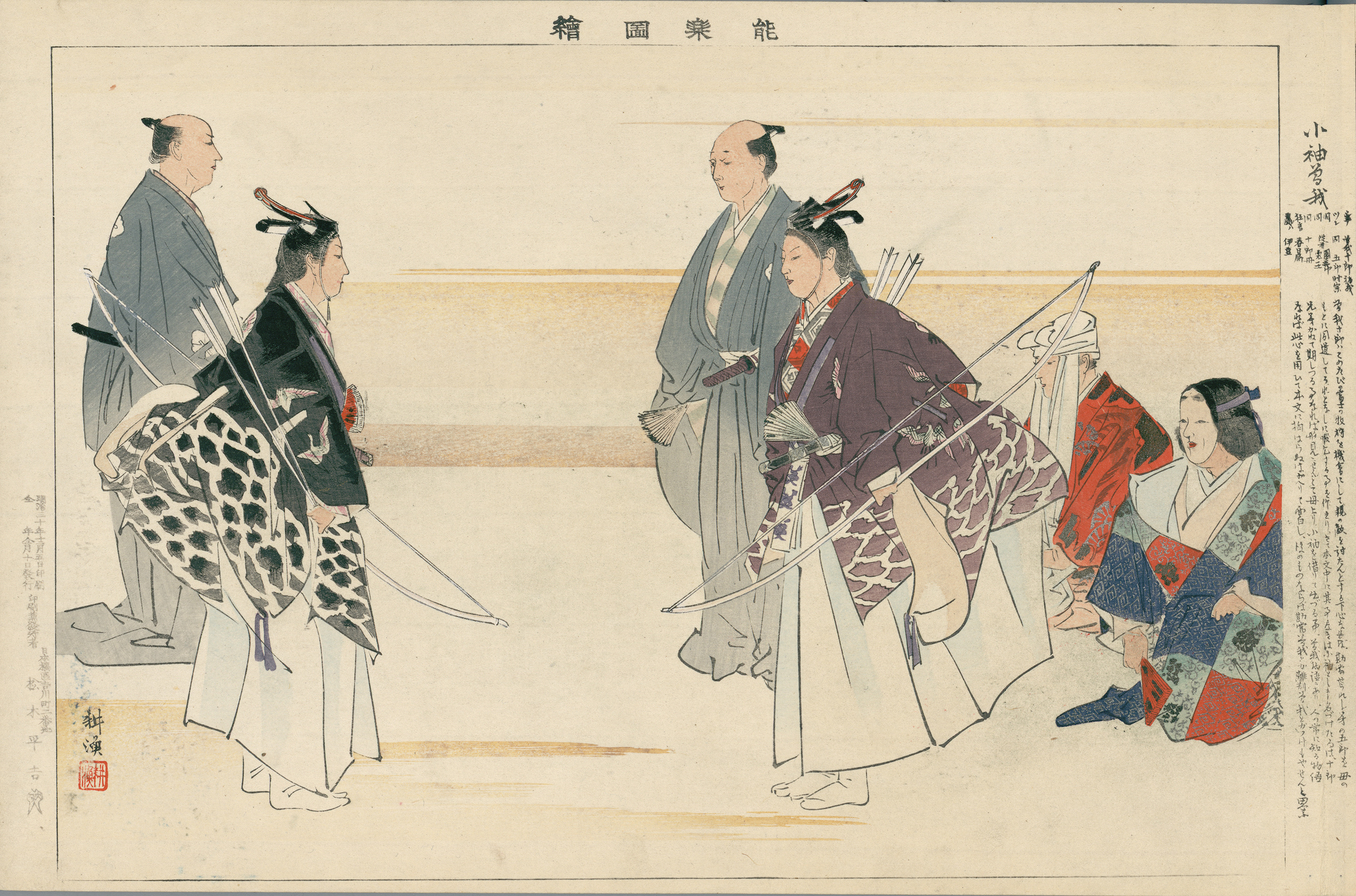 Nōgaku zue was originally published in Tokyo during the late Meiji Era, between 1897 and1902. It comprises five volumes of 261 prints. Each volume is bound in the manner of traditional Japanese orihon, or folding scrolls. Some images include contextual details such as the architecture of the noh stage, the actors preparing backstage, or the spectators in the audience. Other images are more thematic and emphasize important props, attributes of the characters, symbolic decorative motifs, or excerpts of poetic texts printed as if written in elegant script. It is believed that Frederick Mortimer Clapp, first Chair of the History of Art Department at the University of Pittsburgh, purchased this rare set in the late 1920s with money provided by steel heiress Helen Clay Frick, as the first acquisition of our Kōgyo collection.

Nohgaku hyakuban was published in Tokyo between 1922 and1926. It consists of 120 prints that graphically document 100 noh plays. In these prints, Kōgyo focused on the shite, the main actor and, for the most part, excluded other actors. Here, the character of the shite is drawn with even greater emphasis than in the Nohgaku zue prints. In one print, Sanemori 実盛, the ghost of Sanemori even sits on the stairs at the front of the stage, where Noh actors customarily do not sit during a performance.

Nohga taikan was published in Tokyo during the early Shōwa Era, between 1925 and 1930. It comprises five volumes of 200 prints drawn by Kōgyo and his disciple Matsuno Sōfū. Each print represents a scene from a noh play similar to how it appeared on stage (as seen in the print at the top of this article). Of Kōgyo’s three sets of Noh prints, the Nohga taikan prints are thought to depict the plays more accurately than either Nohgaku zue or Nohgaku hyakuban. The prints do not reveal the names of the plays represented, but each print is preceded in its book by a piece of translucent paper on which the title of the play, the characters by type (shite, waki, tsure, kyōgen, kokata), and synopses in Japanese are printed. We digitized these Japanese text pages and uploaded them with English summaries provided by P.G. O’Neill in his A Guide to Nō (Hinoki Shoten, 1964). The set was gifted to ULS by Professors Emeriti Richard and Mae Smethurst.

This digital collection is the product of years of collaborative work, and we are still working on several projects. Forty-two issues of Fūzoku gahō 風俗画報, which carries Kōgyo’s illustrations, were recently gifted to ULS by Professors Emeriti Richard and Mae Smethurst. ULS also purchased Nōgu taikan 能具大観 (A Great Collection of Prints of Noh Props), which contains 100 color woodblock prints of noh props. They are currently in the process of being digitized.

We are also in discussions with the Art Research Center of the Ritsumeikan University to add our entire Kōgyo collection to their Ukiyo-e Portal Database, which will allow a larger audience to access our collection and for us to receive more feedback from researchers and institutions about their needs in relation to the collection.

In addition, Pitt also has the Barry Rosensteel Japanese Prints Collection, which is an ukiyo-e collection gifted by Mr. & Mrs. Rosensteel. Out of 275 prints in the collection, 116 prints depict kabuki theatre.. Among them are also prints of many kabuki plays, which derive from noh plays such as Soga-mono, Heike-mono, Hōgan-mono (Yoshitsune), Komachi-mono (Ono no Komachi), Shakkyō-mono, etc. Our Japanese Theatre Prints Collection at Pitt currently contains 888 items, and we continue to actively build a unique collection that is immensely useful to the study of Japanese theatre.

We hope that the site will serve the needs of  students, researchers, and those who simply want  to virtually browse beautiful Japanese color woodblock prints. Please visit us at Kōgyo: The Art of Noh.