In recent years, the British Library has been developing its collection of Japanese textile design and kimono pattern books. The collection currently consists of around sixty printed books and manuscripts from the Edo (1603-1868), Meiji (1868-1912) and Taishō (1912-1926) periods that range from practical manuals for artisans producing textiles to exuberant artists’ books showcasing their elaborate creations.

In 2019, with the help of a grant from the Great Britain Sasakawa Foundation, the British Library began digitising items from the collection. To date, thirty works have been digitised and uploaded to the British Library’s IIIF Universal Viewer, making it possible for anyone to access these high resolution images and their associated metadata. These can be accessed either directly by title from the Explore the British Library catalogue or via the dedicated Collection Guide, which includes a link to a list of works that are available online.

Fig. 1: A screenshot showing one of our textile designs digitised and viewable within the British Library’s IIIF Universal Viewer.

To highlight the digitisation project, I curated an exhibition entitled Exquisite Patterns: Japanese Textile Design Books, which featured images selected to show the variety and creativity of these works. The exhibition opened in February 2020 but sadly had to close just one month later in response to the coronavirus pandemic and the UK’s national lockdown.

During the closures and disruptions caused by COVID, the British Library started to produce online ‘virtual private views’ of its exhibitions for those who could not attend in person. Taking advantage of this new opportunity, earlier this year I worked with colleagues from the Library’s Events Team to create a video that introduces the collection and features some of the items from the exhibition. There are also three accompanying blogs Exquisite patterns: Japanese Textile Design Books, Zuan-cho – Japanese design albums in the late Meiji Period, and Unsōdō and the evolution of design book publishing in Japan. 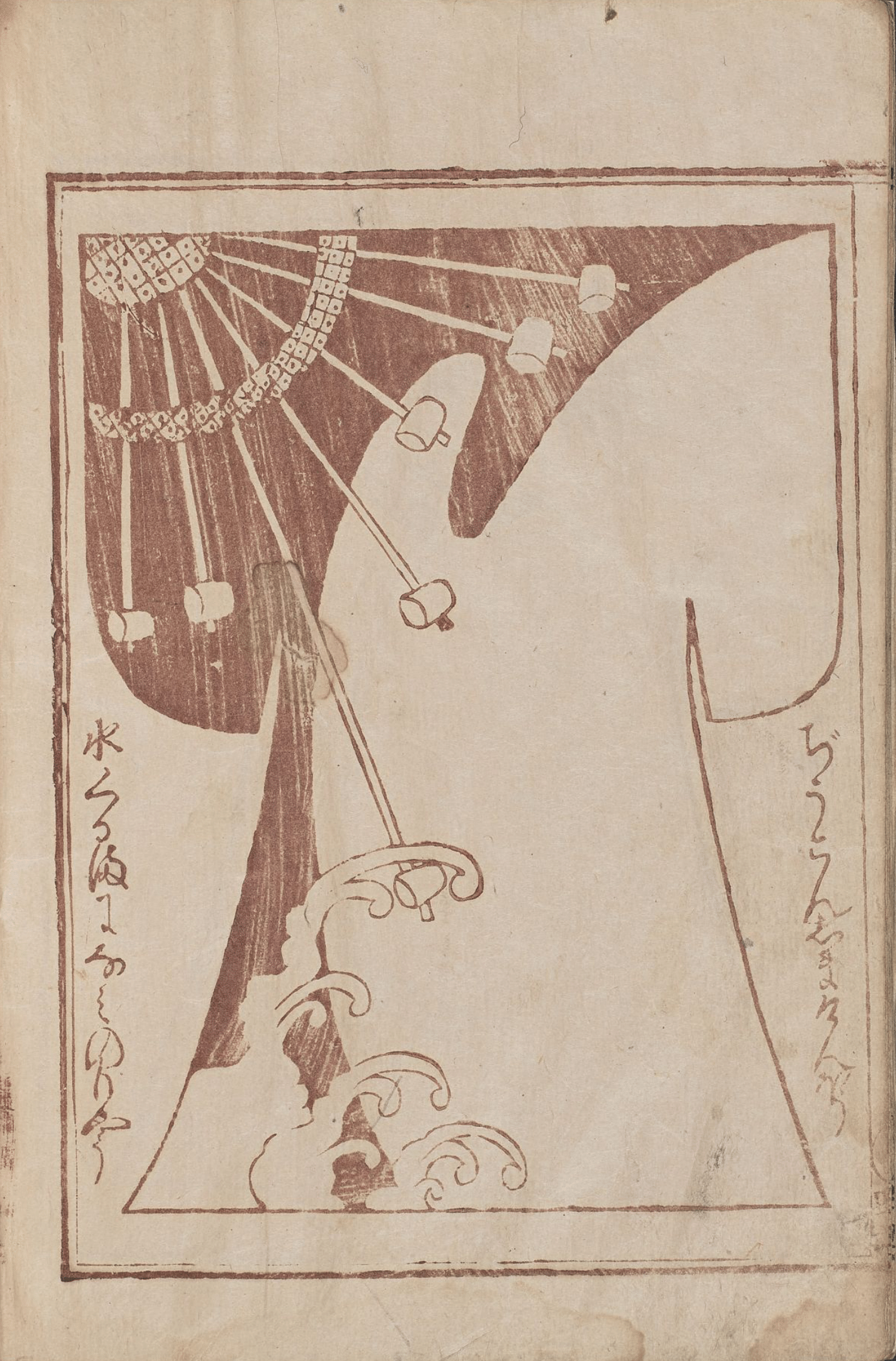 The collection consists broadly of two types of material – hinagatabon 雛形本 (pattern books) and zuanchō 図案帳 (design albums). The first hinagatabon were published in the 1660s in response to the demand among the fashionable for variety and novelty. These early works were printed using traditional woodblock techniques in black and white but often included notes describing the intended colour and type of fabric. They were practical in nature, serving as manuals for textile makers, dyers and kimono merchants or as fashion magazines and catalogues for the discerning customer.

Shinsen o-hiinagata 新撰御ひいながた ‘A New Selection of Patterns’, regarded as the first pattern book, was published in 1666. Initially printed solely in black and white, the following year another edition (Fig. 2), appeared with some pages also printed in single colours such as blue or red.

This type of publication proved very popular and many more printed works on design appeared in rapid succession as publishers sought to tap into the market. As printing technology developed, the pattern books became more sophisticated. The example below (Fig. 3), Shin moyō yaegasumi 新模様八重霞, published in 1784, features illustrations of forty designs, each paired with a ‘close-up’ of a detail of the pattern. While the outline was printed, the designs have been delicately coloured by hand. 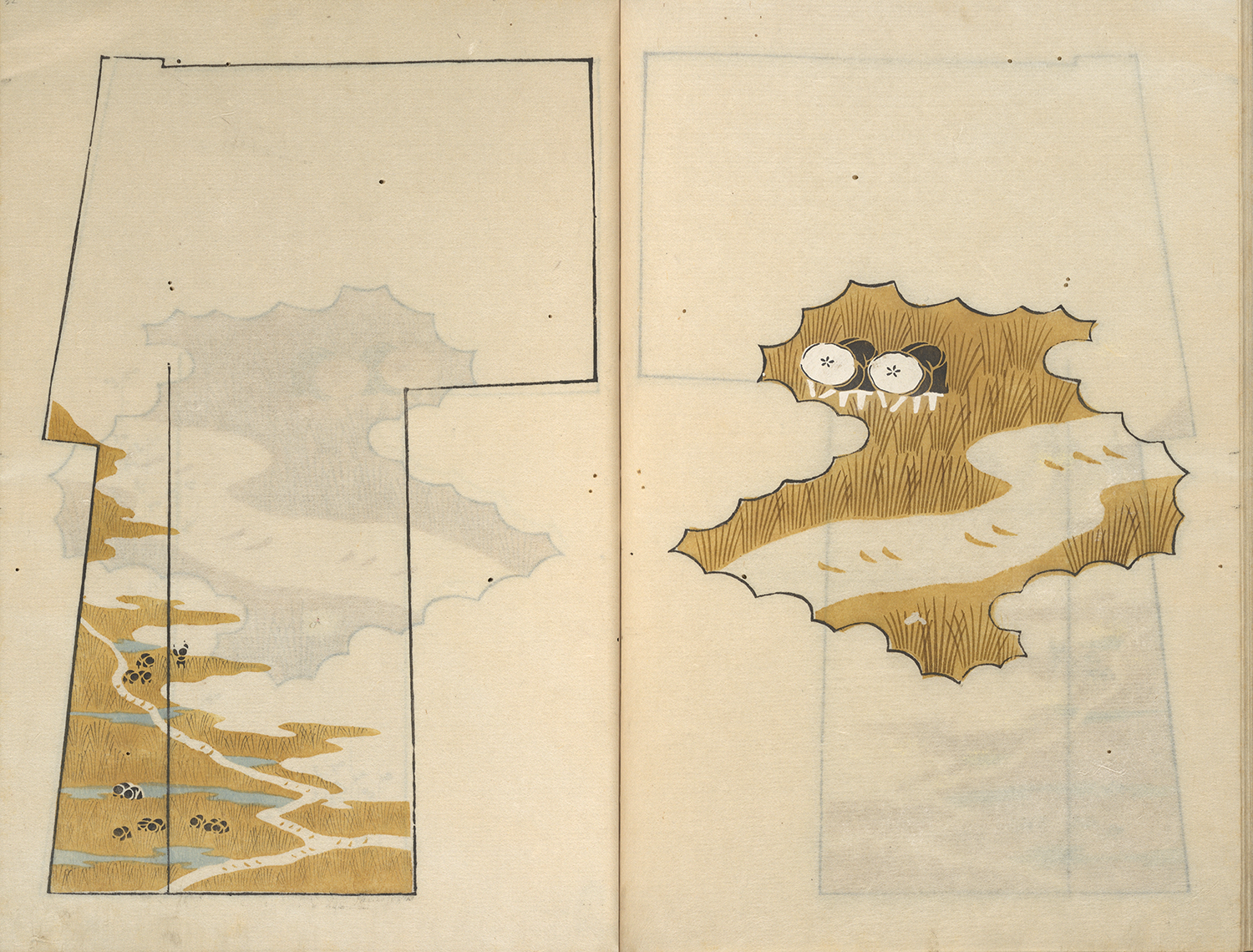 Other textile works in the British Library collection were produced for kimono merchants as a means of attracting customers and promoting their wares. Figure 4, for example, is Kuretake 呉竹, produced in 1902 by Ichida Yaichirō 市田弥一郎, owner of the Kyoto kimono store Ichida Shoten. It includes 120 spectacular designs as well as a set of textile samples from which clients could choose their preferred colours and fabrics. 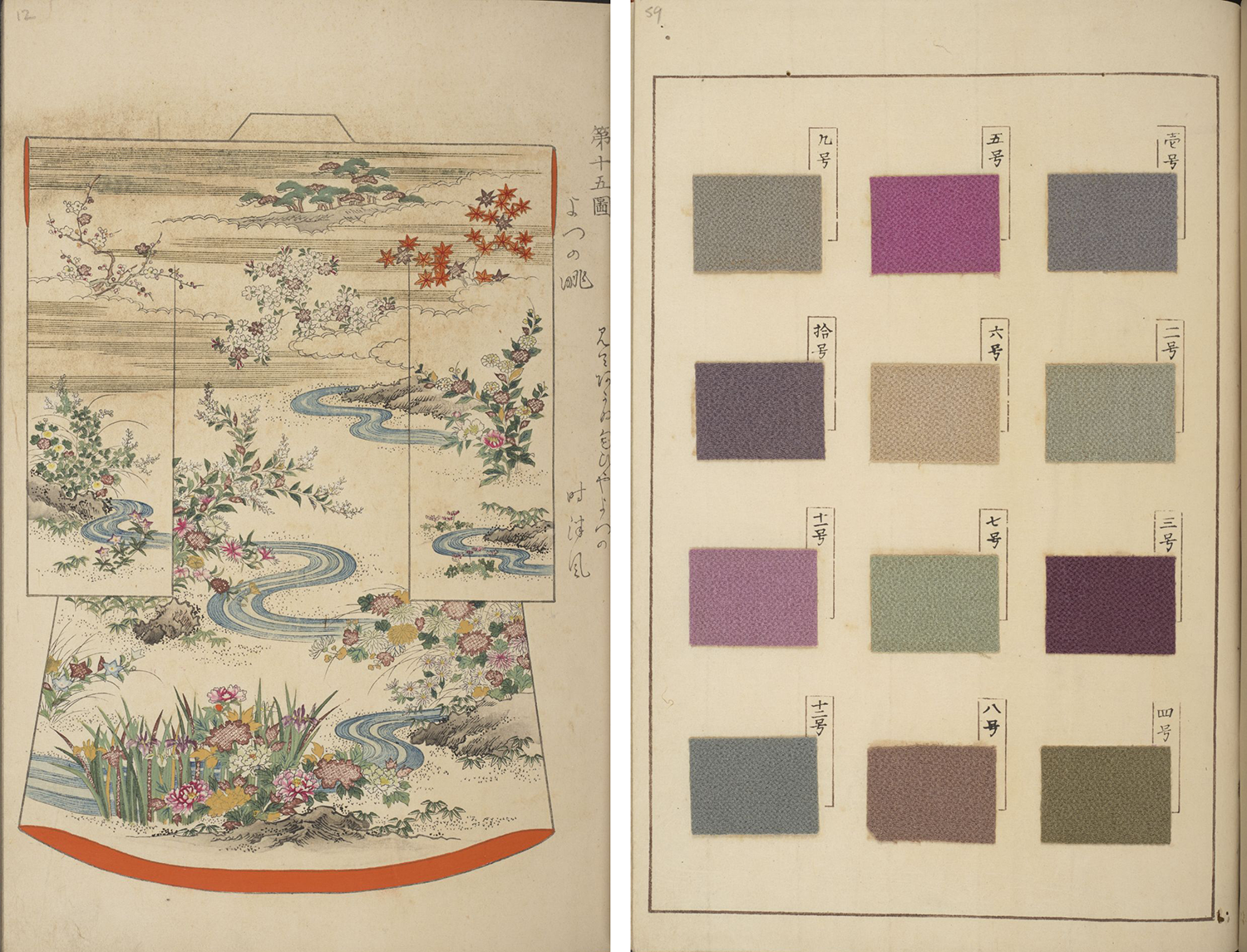 In the late 19th century, technological developments in Japan’s textile industry led to the large-scale production of goods and a growing demand for new textile designs. With the establishment of arts schools such as Kyoto Prefectural School of Painting 京都府画学校, founded in 1880, design was taught as a formal subject for the first time. By the 1890s professional zuanka 図案家, or designers, began to appear, creating a large number of designs which could be used not only for textiles but also for ceramics, lacquerware, furniture and other craft products. Enterprising publishers worked with inventive artists to produce superb design albums, or zuanchō 図案帳, intended to be appreciated and enjoyed for their own sake, as much as for any practical application.

One of the first design albums was Kōgei shinzu 工芸新図 (New Designs for Crafts) by Tanaka Yūhō 田中幽峰. It was published in 1892 by Yamada Naosaburō 山田直三郎, son of a family of Kyoto bookbinders, who had set up his own publishing house the previous year under the name Unsōdō 芸艸堂. Yamada Naosaburō was the younger brother of Honda Ichijirō 本田市次郎, proprietor of Unkindō 雲錦堂, another leading publisher of design books in the late Meiji Period, and together they played a key role in developing the talent of young designers. 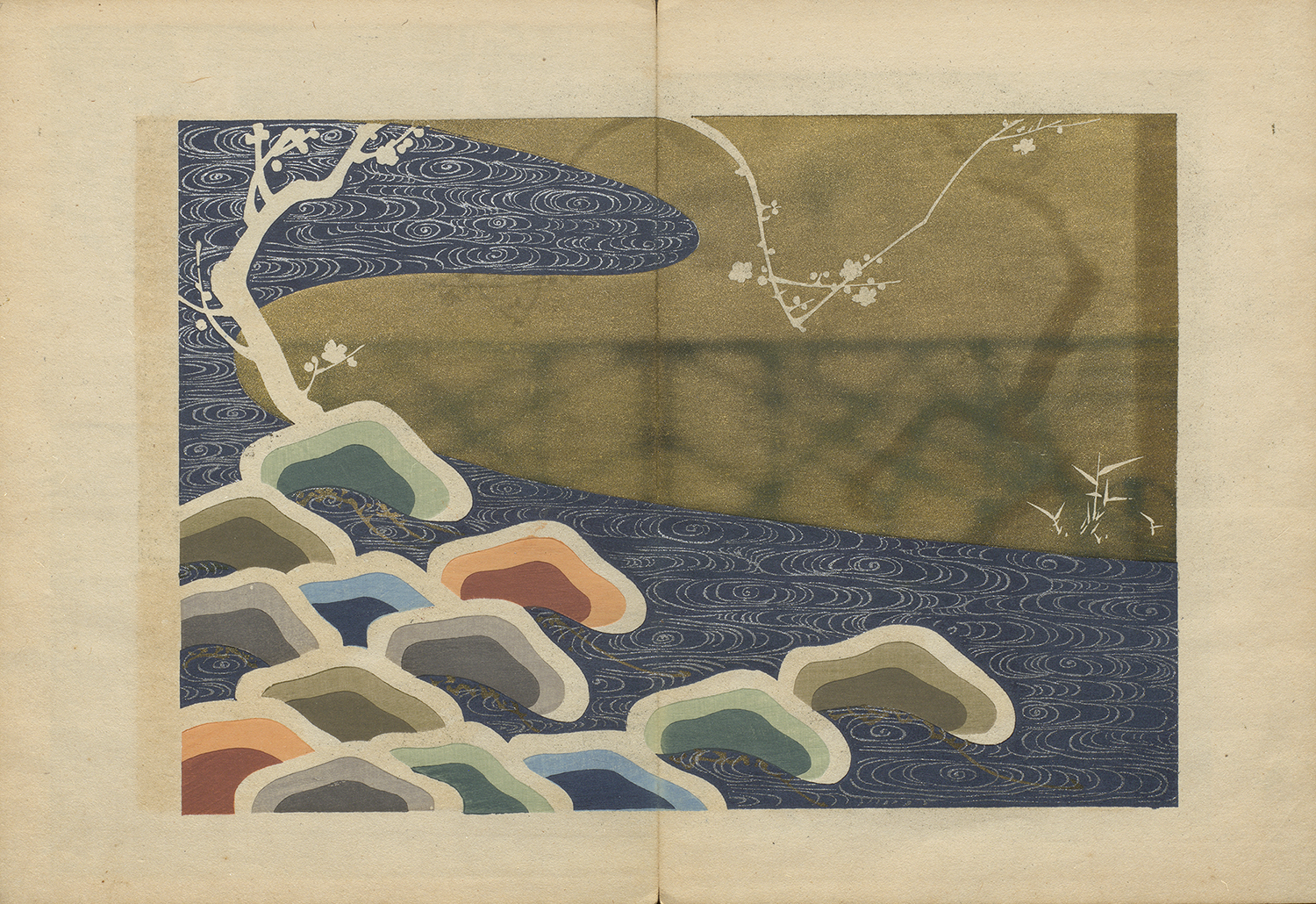 Unsōdō launched a series of influential design periodicals including Bijutsukai 美術海 (Oceans of Art), which ran from 1896 to 1902 and Seiei 精英 (Elite) which appeared from 1902 to 1907. These innovative publications featured hundreds of designs by many different artists, giving them the opportunity to explore new styles and themes as they honed their skills. 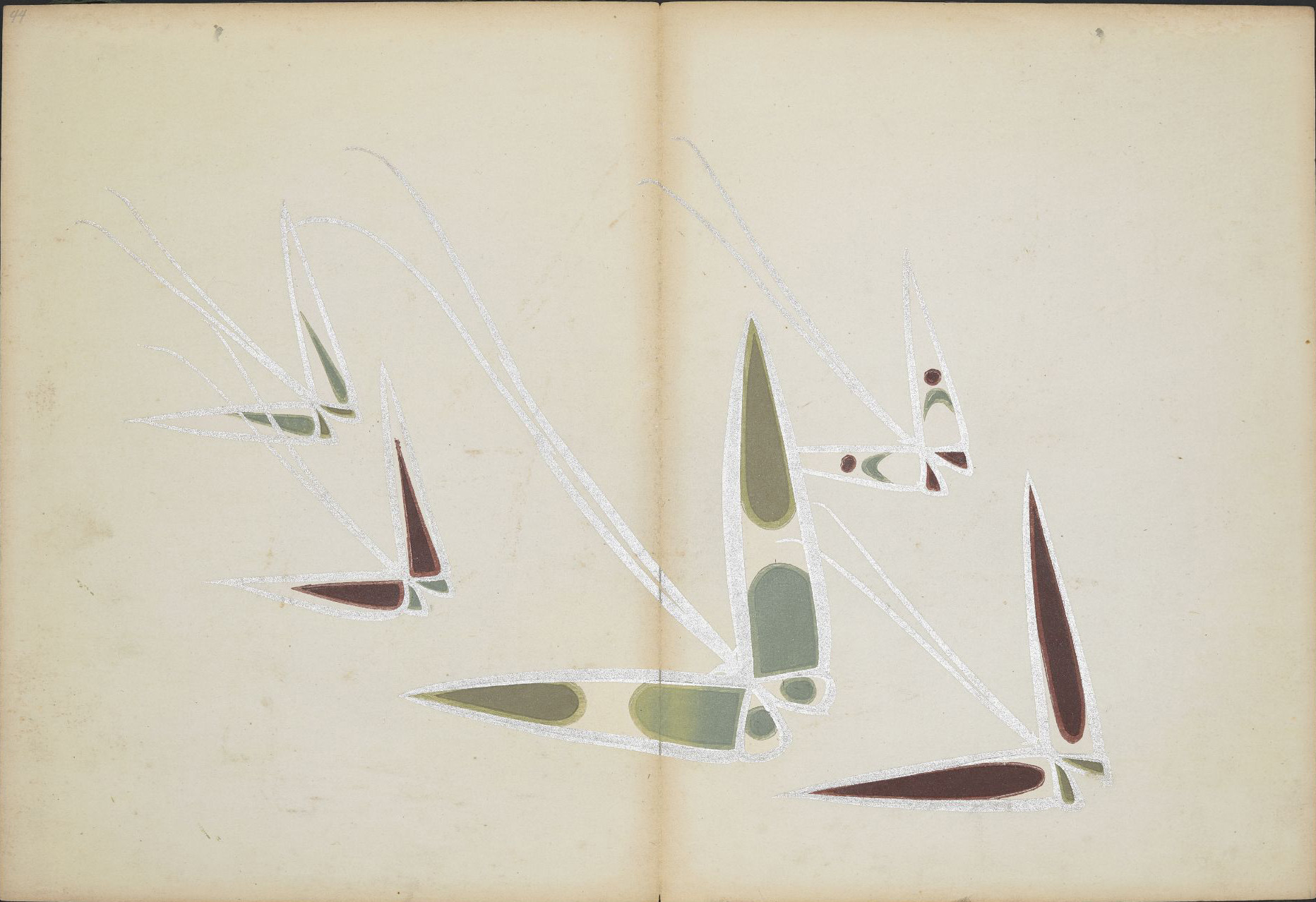 Many of the artists who contributed to these periodicals went on to work with Unsōdō and Unkindō to produce albums of their own designs. These included Kamisaka Sekka 神坂雪佳 (1866-1942), Furuya Kōrin 古谷紅麟 (1875-1910), Tsuda Seifū 津田青楓 (1880-1978), Shimomura Tamahiro下村玉広 (1878-1926) and Ogino Issui 荻野 (fl. 1900-1910), all of whom are represented by works in the British Library collection. By employing exceptionally skilled block-carvers and printers, and ensuring the highest standards of book design and production, Unsōdō and Unkindō made the zuanchō into an art object in its own right. 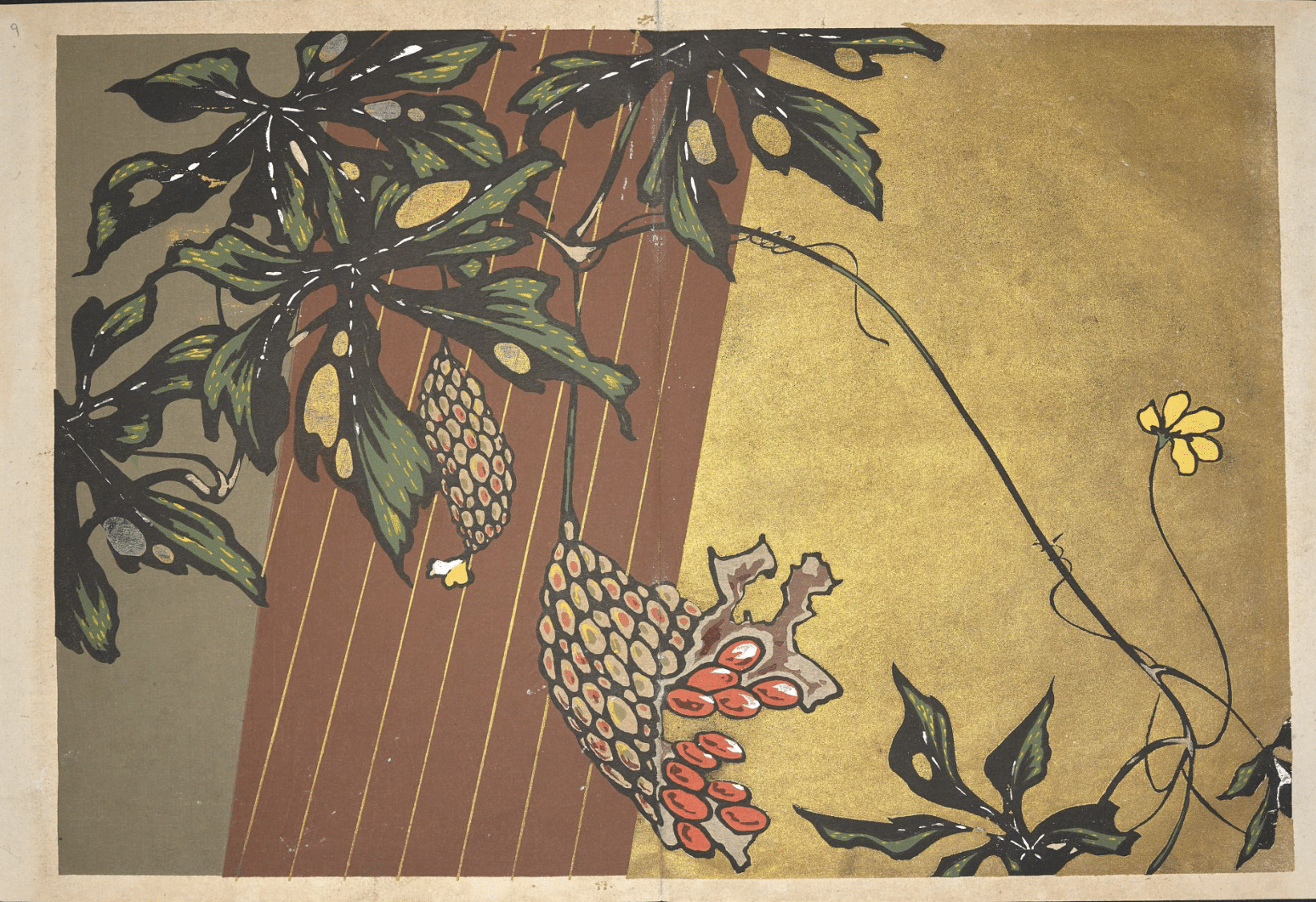 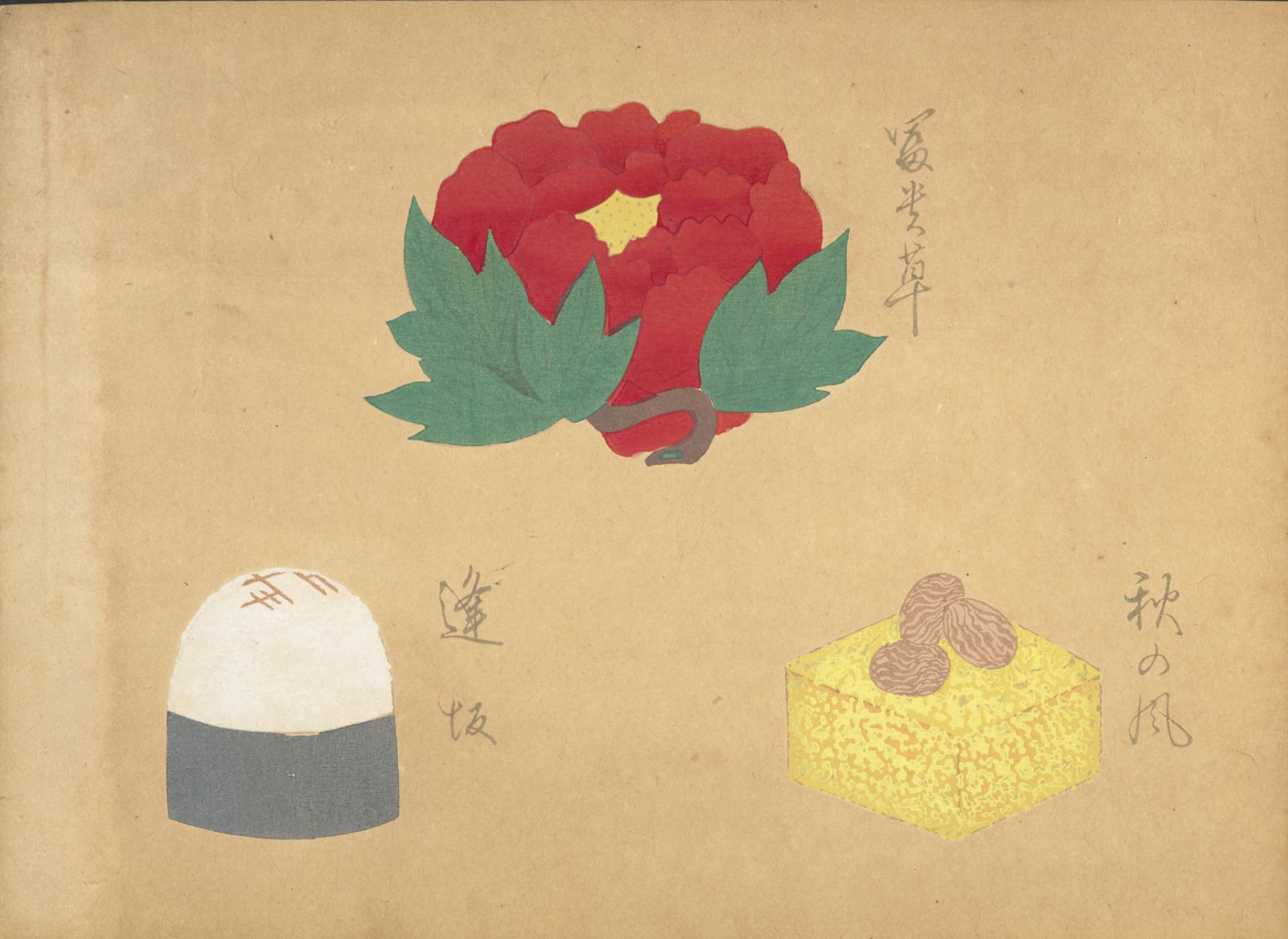 While the majority of the British Library’s design books relate to textiles, others deal with other subjects such as lacquerware, ivory carving, toys and even confectionery!

The inspiration for this digitisation project came from the positive reactions and interest which these design books provoked when I included them in ‘show-and-tell’ sessions for fashion students as part of the British Library’s engagement with the creative industries or for our annual fashion competition. I hope that the digitised images, video and accompanying blog posts will be a useful online resource for librarians, curators and researchers as well as a source of inspiration and enjoyment for anyone with an interest in Japanese design. I am delighted that NCC has provided this opportunity to introduce the collection to audiences in North America and beyond. Through the Universal Viewer people around the world who are not able to visit the British Library in person can have access to these beautiful books. My colleagues and I also are keen that the IIIF functionality encourages people to use the images in collaborative and creative projects.