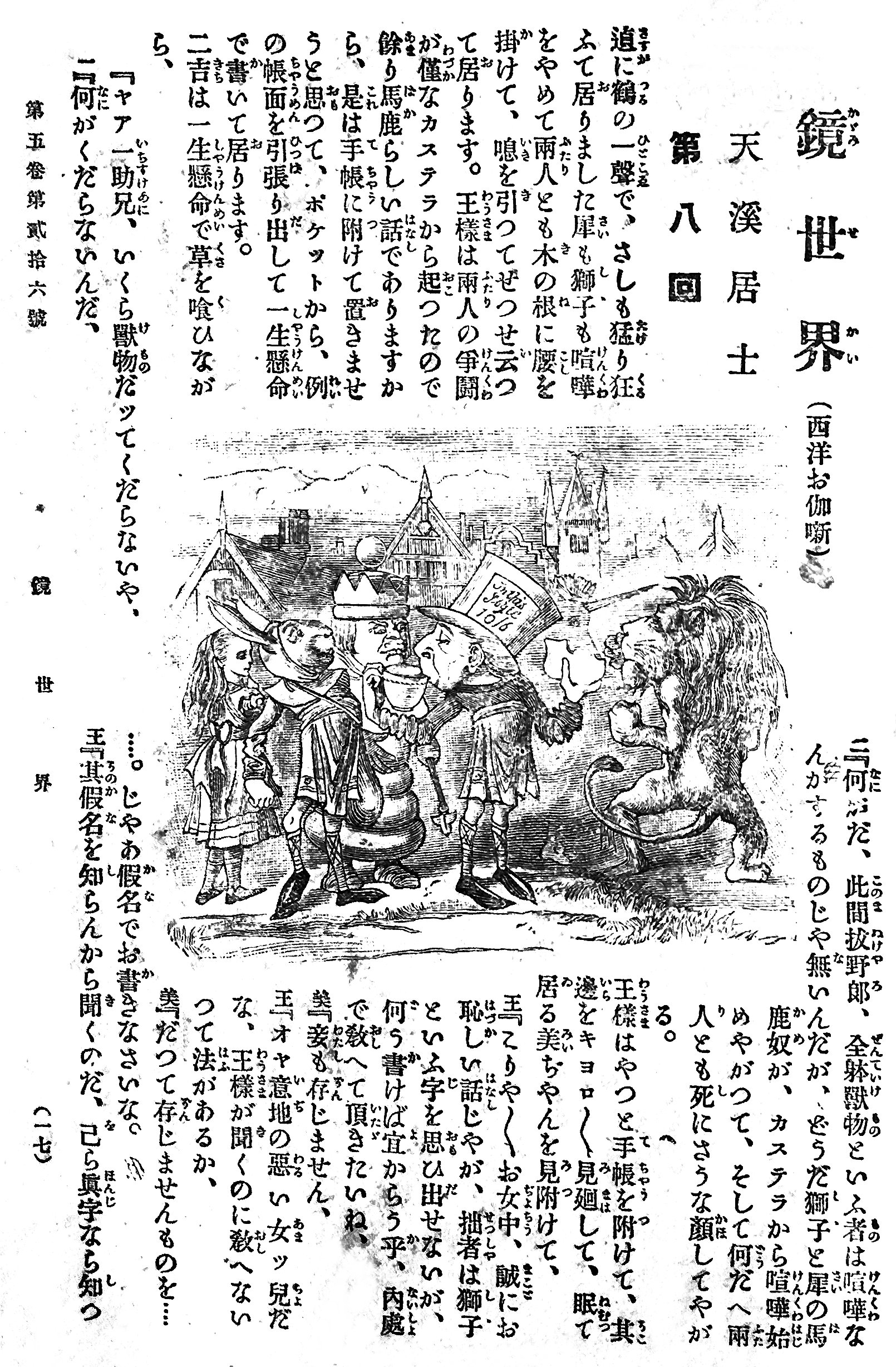 The University of Southern California Libraries holds what we believe to be the largest publicly-available collection of Japanese materials related to the books Alice’s Adventures in Wonderland and Through the Looking Glass outside of Japan. These are among the more than 5000 items in the Cassady Lewis Carroll Collection housed in Special Collections. Within the Japanese materials (numbering over 300 items), there are Japanese translations and adaptations of Carroll’s work, as well as Japanese works inspired by the Carrollian Universe, including literature, art, clothing, ephemera, film, and music. With more translations into Japanese of the Alice books than in any other language, it is clear that the young girl Lewis Carroll created has captured the Japanese imagination in a way that few literary characters can claim, and the Cassady Lewis Carroll Collection provides scholars with an opportunity to explore this allure in detail.

Right: A page from Mirror World (Kagami Sekai, 1899), the serialized translation of Through the Looking Glass - the first Japanese translation of any of Carroll's works.

I found out about the USC Lewis Carroll Collection shortly after I began working as the Japanese Studies Librarian. I was intrigued to learn more about the Japanese materials that then-PhD student Amanda Kennell was working with for her dissertation “Alice in Evasion: Adapting Lewis Carroll in Japan.” Amanda’s enthusiasm for Alice in Japan, along with that of the donors of the collection, Dr. George and Mrs. Linda Cassady, further fascinated me. I learned that Amanda had also been helping the Cassadys with their acquisitions of Japanese materials. After she graduated in 2017, I wanted to see what I could do to help and also think about how to ensure that the Japanese materials in the collection continued to be used once the main researcher working with them was no longer at USC. 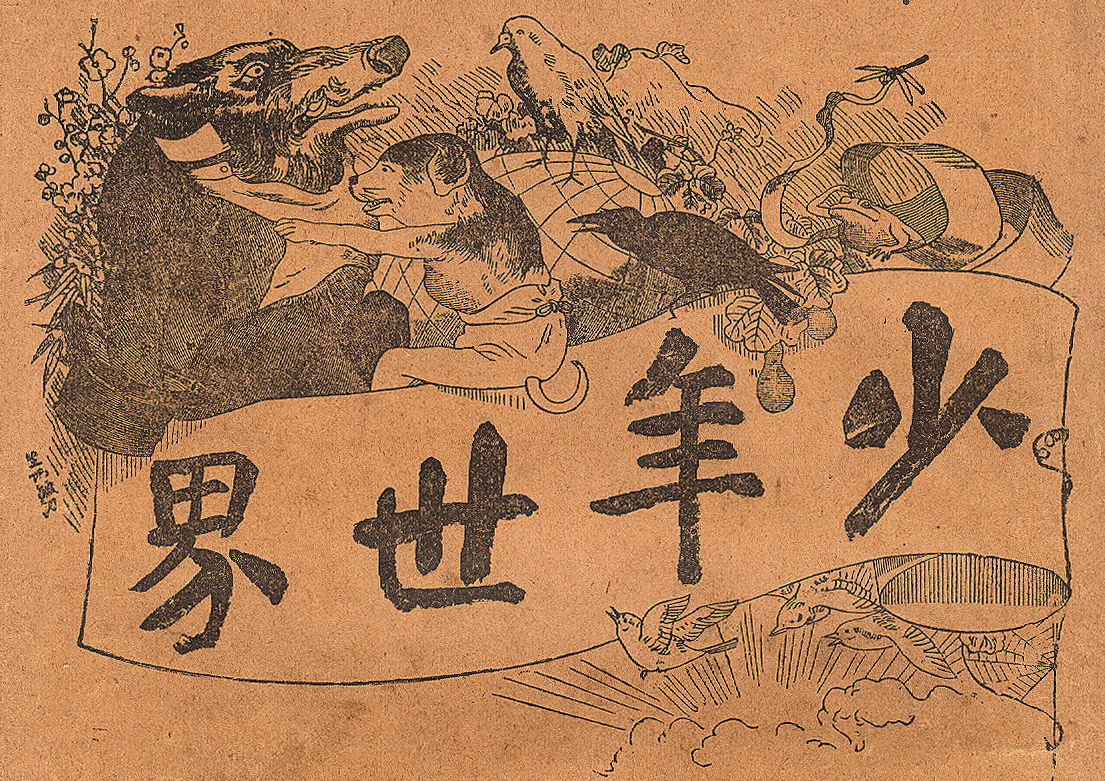 Banner image from the cover of one of the eight issues of Shōnen sekai that contain the first Japanese translation of any of Carroll’s work.

I also acquired postcards and an exhibition booklet from ARTs*LABo, a contemporary art gallery in Tokyo, which held the exhibition “ALice*” in 2015 and 2018, featuring the work of Chita Coppe and Nakaya Tomoyuki—two Japanese designers and illustrators who have engaged extensively with Alice-related themes. The 2015 vol. 1 cover can be seen below. 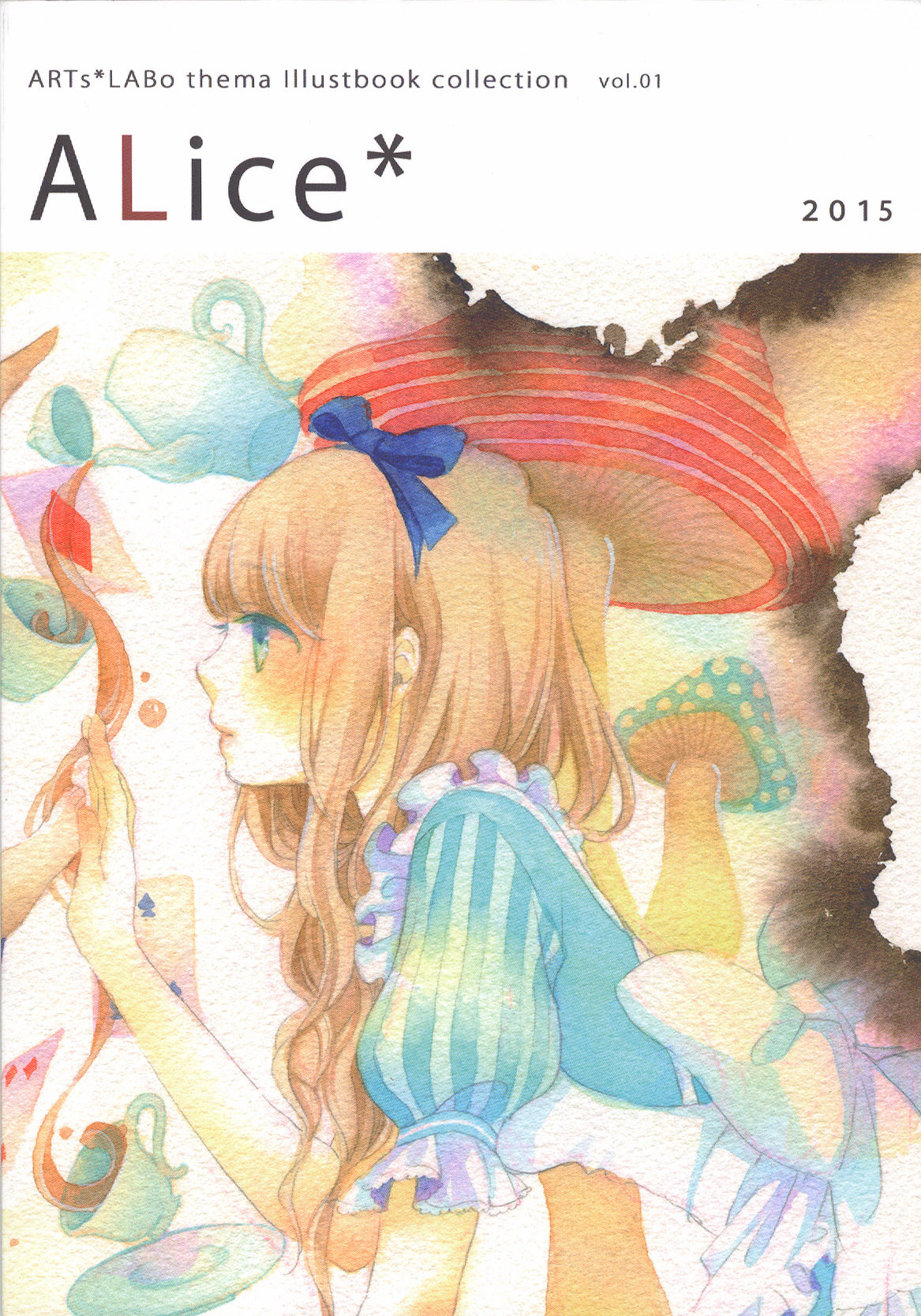 Working with my colleagues in Programs and Planning at the USC Libraries, I curated a small exhibit in 2018 with professors Satoko Shimazaki and Kerim Yasar from the Department of East Asian Languages and Cultures which featured Japanese materials from the Cassady Collection. This private exhibit was staged for a meeting of the Lewis Carroll Society of North America (LCSNA) hosted by USC in April of that year. Titled Whimsy and Nonsense in East Asian Languages and Cultures, the exhibit focused on the engagement of important Japanese literary figures with Alice in Wonderland and theatrical storytelling of Alice in Wonderland in Japan. I also facilitated an “in conversation” piece with professors Shimazaki and Yasar during the LCSNA meeting: On Translating Whimsy and Nonsense in East Asian Languages and Cultures.

Through our exploration of the Japanese material in the Cassady Collection and the discussions held at the meeting, we not only highlighted this important component of the collection to the LCSNA members, but it also gave professors Shimazaki and Yasar an opportunity to delve more deeply into the collection, and they were surprised by what they found. For example, Professor Yasar noted how many important Japanese literary figures had themselves translated Alice in Wonderland into Japanese, such as Akutagawa Ryūnosuke and Kan Kikuchi’s Alice Story (Arisu Monogatari, 1927). Many Japanese artists have also engaged with the Carollian universe, such as Yayoi Kusama who illustrated an edition of Alice in Wonderland (Fushigi no kuni no Arisu, 2013).

Inspired by the success of this “in conversation” piece, in collaboration with Dr. Amanda Kennell (now Assistant Teaching Professor of International Studies at North Carolina State University) I developed a public exhibit, which was staged in the lobby of Doheny Memorial Library, our main campus library. The exhibit was planned to coincide with the Wonderland Awards, an annual multidisciplinary competition that encourages new scholarship and creative work related to Lewis Carroll (1832–1898). Items we highlighted included kamishibai, illustrated cards that are performed by a dramatic reading of the script on the back (see below); objects that show how different artists, such as Hiroko Sato and Miki Ito, have represented the Alice stories for Japanese children; and Alice Book (Arisu Bukku), an anthology put together by a group of female manga artists who call themselves the “March Hare Tea Party Club.” The contributing manga artists used the anthology as a way to try out ideas their male editors would not normally allow. The book thus marks an attempt to push back against gender-based boundaries in artistic production. 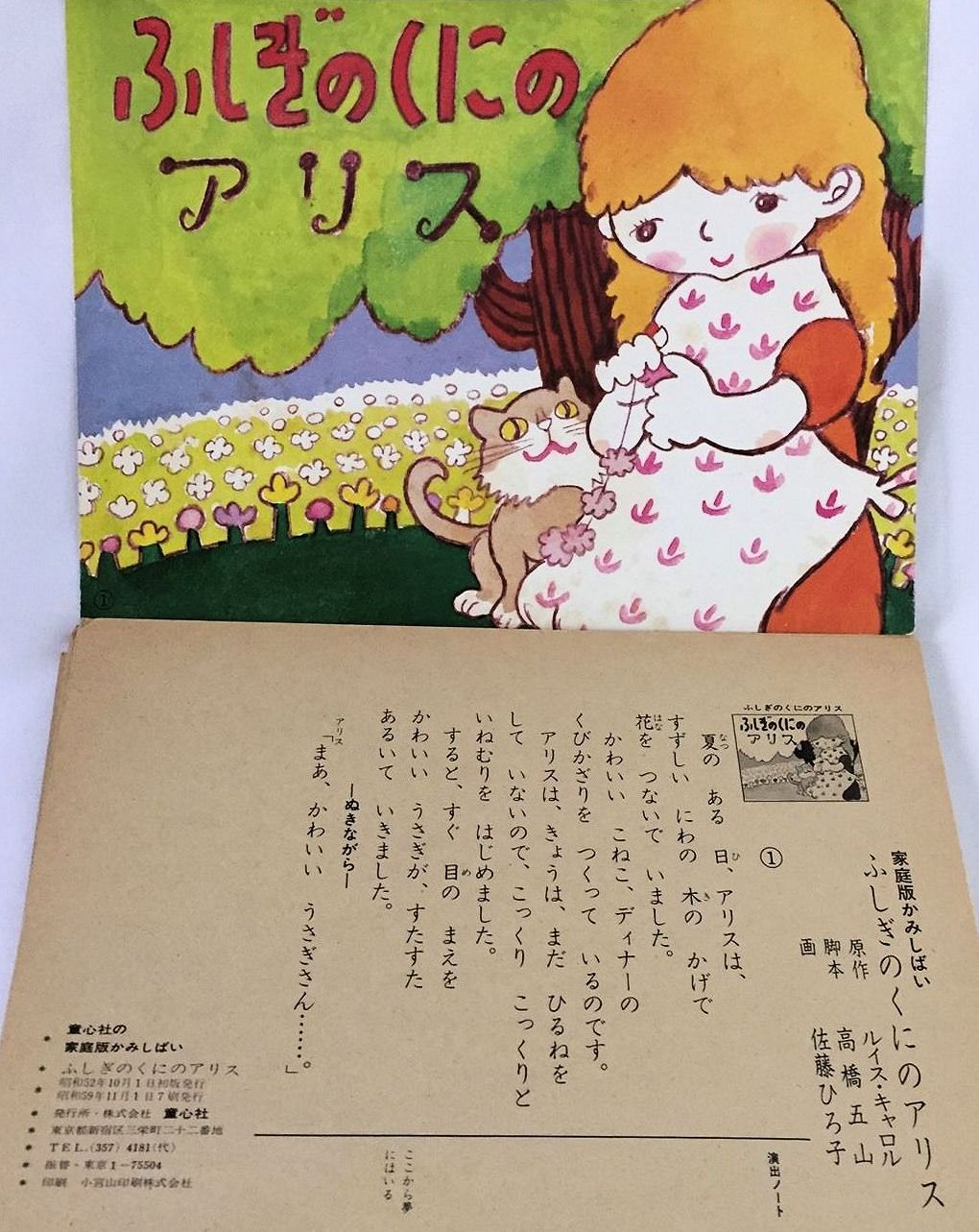 Dr. Kennell and I have also developed a plan for a small scholarly conference, Encountering Alice in Japan, on Japanese adaptations of and interactions with the world of Alice in Wonderland. The conference themes will include: film, art, manga and the reception of Alice in Japan; Lolita (Gothic Lolita) fashion and identity; intersections between video games and literature; and representation of girlhood in Japanese literature and popular culture. The conference will explore the influence of the figure of Alice, and more broadly of girls in general, in Japanese literary, cinematic, artistic, and performative cultures. We received funding from the USC Shinso Ito Center for Japanese Religions & Culture, USC Libraries, and the Northeast Asia Council of the Association for Asian Studies.

Right: A card from a 1984 set of twelve kamishibai, children's theatre cards, with image on one side and script on the other to play out the story of Alice in Wonderland.

Unfortunately, the conference was postponed due to Covid-19, but we plan to hold it soon once international travel restrictions ease for our speakers. We hope this conference will not only enrich understanding of the Japanese materials in the Cassady Collection and allow for researchers to have access to them during their visit to USC but also facilitate new scholarship on representations and roles of girls in modern Japanese popular culture.

While my work with the Japanese materials in the Cassady Collection was largely informal to begin with and grew out of my own interest in promoting awareness of Japanese materials outside the East Asian Library, in July of 2021, my relationship to the collection was formalized when the Dean of USC Libraries asked me to take on a curatorial role as Coordinator of the Cassady Lewis Carroll Collection. This is an additional appointment on top of my main role as Japanese Studies Librarian and it has been an interesting learning curve working with the collection in its entirety. Given the strength of the Japanese component of the collection, it is something that I will continue to highlight as I work on overall collection management, outreach, and programming.

One exciting upcoming project based on the Cassady Collection is an exhibition at the Bellevue Arts Museum (BAM), Seattle, which will include Alice in Japan as one of the three main themes. Collaborating with the BAM Curator to select items for the exhibition will be a wonderful opportunity for me to get to know the materials better and showcase them to a wide audience outside of university settings. I am also hoping to develop a new fellowship program to attract researchers to use the collection and to encourage faculty to incorporate materials from the collection into their teaching.

Managing the Cassady Collection has also allowed me to create professional development opportunities for early career researchers. In 2021, I was able to hire a part-time staff member to work with me as Cassady Collection Program Assistant. Dr. Jesse Drian holds a PhD in East Asian Languages and Cultures from USC and jumped at the chance to gain experience working with library collections in preparation for the job market. He had heard about the Cassady Collection from Dr. Kennell during their time together at USC, but working directly with the collection provided a new vantage point. It was not until Dr. Drian started working with the collection himself that he fully realized the extent of the Japanese materials. The diverse translations, illustrations, and multi-media works provide both broad and detailed perspectives of the Carrollian world within Japan. 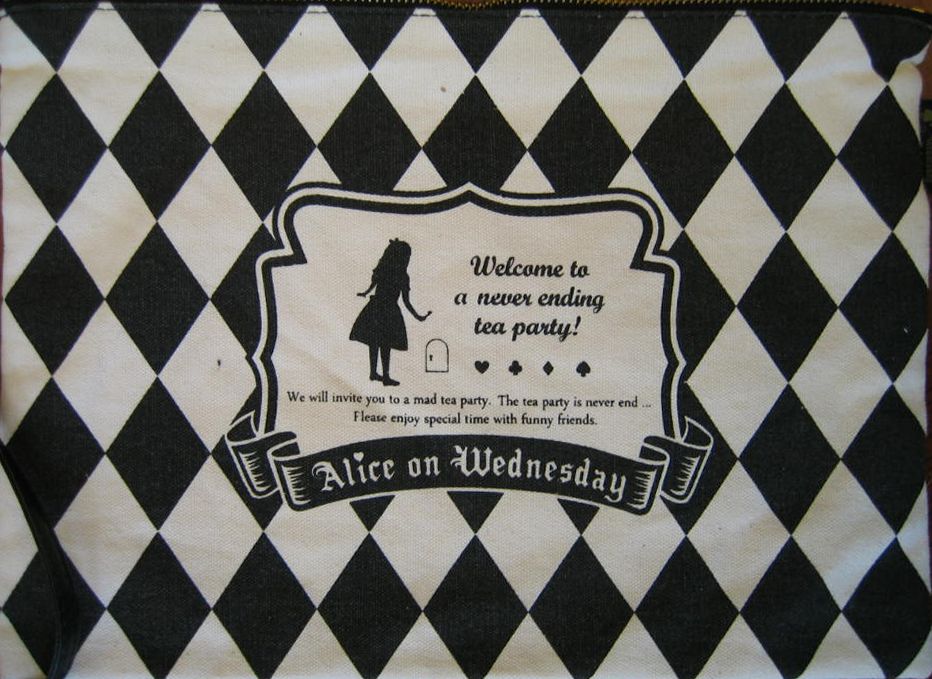 The comprehensiveness of the collection illuminates and preserves the ubiquity of Alice in Japanese popular culture. Indeed, it is not just through words and images that we can see the influence of Alice. The collection includes objects like a handbag from the Alice on Wednesday store in Tokyo (seen above), and everyday items like postcards or empty diaries, things often used, discarded, and forgotten. A Gothic Lolita Dress, Hat & Stockings form an outfit in the style known as "Gothic Lolita" - a Japanese fashion trend born in the 1990s and popular in areas of Tokyo such as Harajuku and Shibuya.
Gothic Lolita incorporates elements of Victorian women's clothing, such as frills and ruffles, alongside a gothic aesthetic, and carries connotations of "girlishness" or "hyper-femininity". It is an example of the influence of the Carrollian universe and Victorian England on Japanese culture and one of the many interesting items one can find in the Cassady collection. Of course, traveling to the Alice on Wednesday store or Harajuku to see street fashion might be more enjoyable than going to a library at USC, but not all researchers and students have this luxury. Making such realia accessible creates opportunities for critically engaging with commonplace items one might not otherwise consider as research objects.

As Dr. Drian and I can attest through our work, there is something to be said for immersing oneself in the Cassady Collection. There are so many materials and so many insights to be found by perusing the online bibliography or an in-person visit that would be easy to miss by relying solely on the Libraries’ catalog. The Cassady Lewis Carroll Collection Research Guide is a great place to get started learning more about this exciting collection and its potential as a resource for Japanese Studies.