Eat Pray Anime (EPA) is an educational YouTube channel that explores academic scholarship on religion, particularly religion in Japan, through the lens of popular media. The channel’s mission is to build religious, cultural, and media literacies by creating accessible videos that provide historical background and explain complex theories through examples from anime, manga, and videogames. 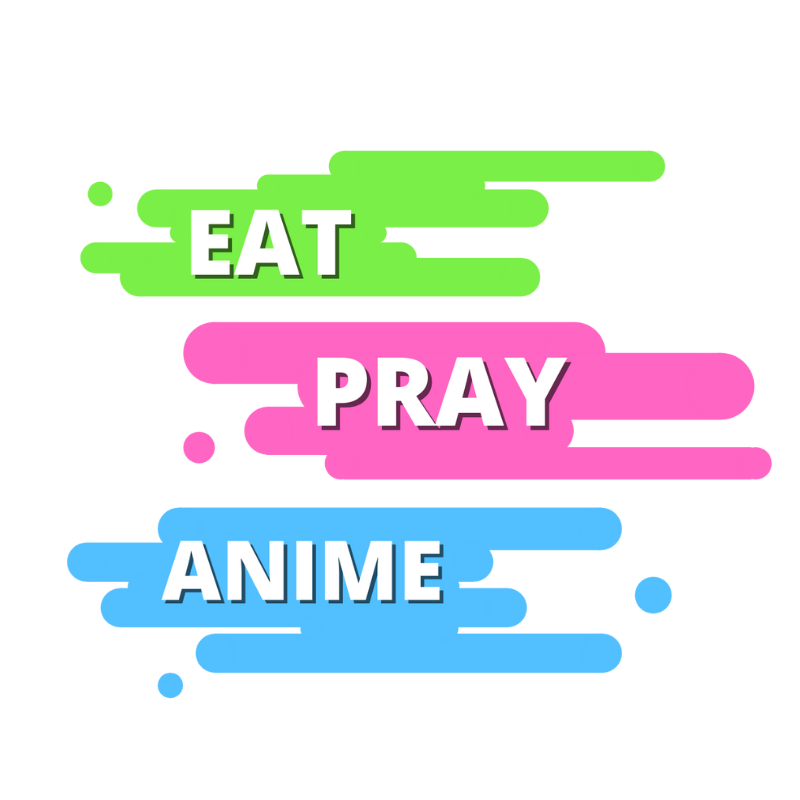 The global COVID-19 pandemic has changed both how we approach education and consume content. According to Forbes, “the pandemic has accelerated an already ravenous appetite for video content.” YouTube users collectively watch one billion hours of video every day, and a Pew Research study conducted in 2018 found that the majority of YouTube users go to the platform for educational content. With the shift to greater usage of online and asynchronous learning during the pandemic, educators, too, are using more video content in class.

It is imperative that we meet our publics where they are. One of Eat Pray Anime’s target audiences are people I call “Japan fans,” which has the advantages of catchy rhyme and avoiding the baggage and gatekeeping associated with terms like “weeb” (short for weeaboo), “otaku,” or “gaijin.” EPA’s audience also includes people more broadly interested in learning about different religions. Although a fair portion of viewers are actively studying in East Asian or religious studies programs (or wish to do so in the future), the majority of my audience will never take these classes. Courses on Japanese culture and media are one of East Asian Studies departments’ most popular offerings, but many college students feel they cannot justify the time and expense of enrolling in such a course to themselves or to their parents, especially when they are majoring in other fields. Moreover, many Japan fans have long since graduated and no longer have the same access and opportunities to learn about Japanese religion provided by an educational institution. Understanding Japan and religion should not be limited to students in academic environments. Eat Pray Anime thus aims to make scholarship on Japanese religions and media accessible to people from all walks and stages of life.

Popular media is not a transparent window into ‘Japanese culture,’ but it does provide opportunities to engage audiences in more nuanced, critical discussion of cultural production and consumption. Eat Pray Anime represents a scholarly intervention in the Japanese culture and fandom content niches and “edutainment” channels, which tend to privilege entertainment over learning content. While EPA seeks to create accessible and engaging entry points into Japanese religion and media, it is first and foremost an educational channel. Each video is grounded in scholarship and citations are provided for all sources. Recognizing that Japanese religions tend to be siloed within academia, Eat Pray Anime also seeks to highlight the contributions of Japanese religious studies scholarship, especially those focusing on understudied non-Buddhist traditions, to the public understanding of religion.

In 2020, I wrote a five-part introductory series on Shinto for Religion for Breakfast, a popular educational YouTube channel hosted by Dr. Andrew Mark Henry. The series provides an overview of Shinto and then examines its historical relationship with Buddhism, significance for definitions of religion, globalization, and connections to the beloved animated films of Studio Ghibli’s Miyazaki Hayao. Outside of Japan, Shinto Studies is a rather small and isolated field, and, though I had been researching the growth of global interest in Shinto, I doubted whether there would be a public audience for this kind of content. When the first video was released, I was shocked to see that thousands of people watched it within the first thirty minutes. To date, the series has over half a million views. The early reception of the videos was fantastic, and the viewers enthusiastically engaged with the content and asked for more to be made with reference to their favorite shows and games. 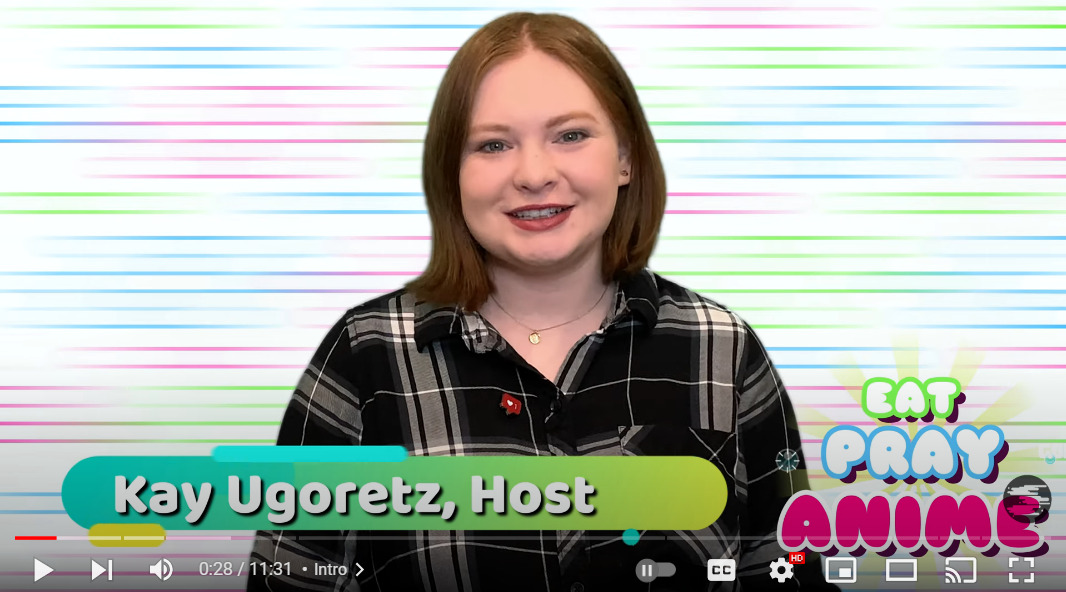 Watching the view count rise and comments pour in, I realized that, while I may never have the privilege to teach so many people in the classroom, there is a huge audience out there that is genuinely hungry to learn and able to be reached in alternative ways. I subsequently created Eat Pray Anime with just a laptop, an iPhone, and a desk in my parents’ kitchen in the midst of the COVID-19 pandemic lockdown.

The channel currently encompasses over twenty videos—some short-form (10 minutes or less) and some long-form (over 10 minutes)—on topics ranging from Shinto mythology in Naruto to anime pilgrimage and Shugendō in Marvel comics to material religion in the marketing for the game Sakuna: Of Rice and Ruin. Though Eat Pray Anime is a young channel, it has grown to nearly 2,000 subscribers, 2,000 hours of content watched, and over 50,000 views with only twenty videos published and no external funding in its first two years. My videos have been used in classrooms around the world. For example, Drs. Helen Hardacre (Harvard) and Fabio Rambelli (UC Santa Barbara) have used my videos on Shinto mythology in the popular anime Naruto in introductory classes on Japanese religion and Shinto. My videos for Religion For Breakfast and Eat Pray Anime have even been incorporated into U.S. state board of education curricula.

My viewers are interested in reading more about Japanese religion beyond Wikipedia, but they don’t know where to start. Eat Pray Anime seeks to provide a digital gateway to traditional academic resources and create new digital resources in the process. Each EPA episode references academic monographs and journal articles and includes a bibliography with links in the video description. Wherever possible, I identify scholars by name and feature the image and title of their publication in the video.

I want to use Eat Pray Anime as a platform not just to promote my own work and interests, but also to boost the public impact of scholars of Japan, religion, and media as a community. Collaboration is as much a key to channel growth as it is to providing a more nuanced understanding of Japan’s religious landscape. In 2022, I began to invite scholars, information specialists, and other experts to collaborate on and/or appear in EPA videos to speak to their own areas of expertise and build public familiarity with scholars in Japanese and religious studies. Recently, Dr. Fabio Rambelli discussed maritime religion in Japan as seen in Genshin Impact, an incredibly popular open-world action roleplaying game. In an upcoming video for September, I interview Marvel comic creator and Eisner Award-winning artist Peach Momoko about her interpretations of Japanese religion and folklore in her trailblazing series Demon Days. Consider this an open invitation to pitch a video topic for educational use and/or collaborate on a video for Eat Pray Anime! 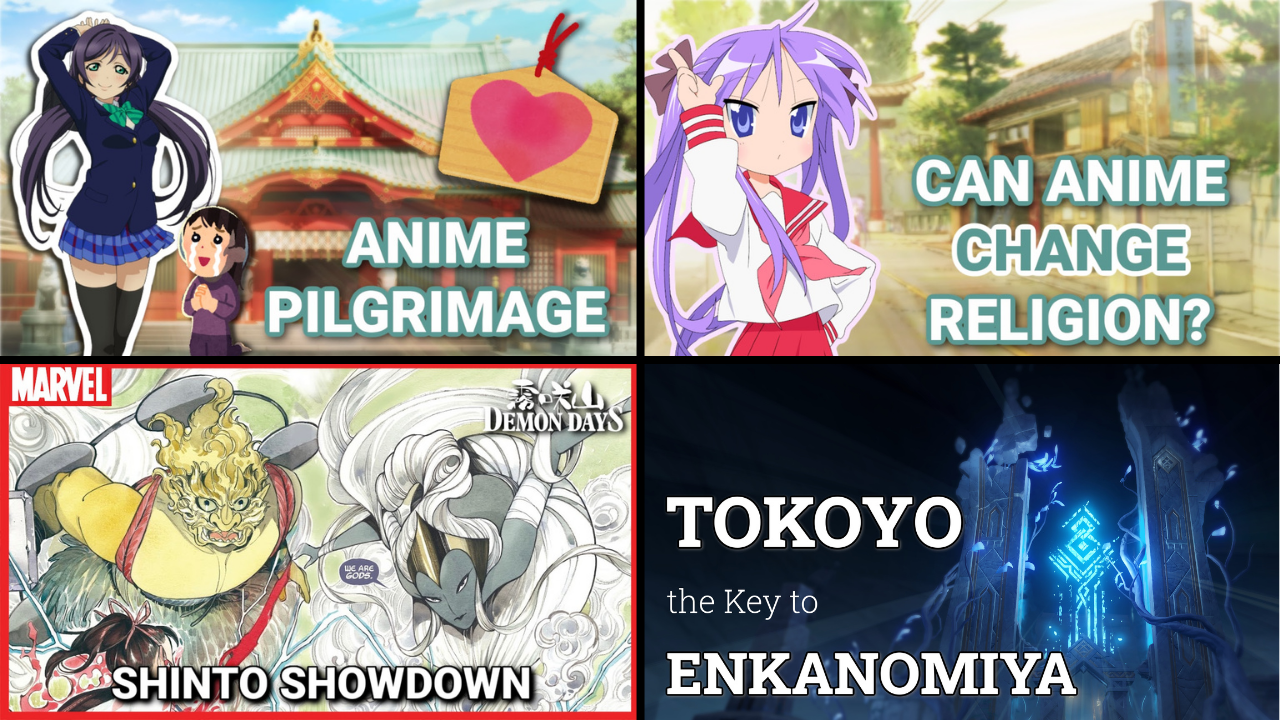 Most EPA videos fall somewhere between eight and fifteen minutes in length (around 1,200 to 2,000 words) and include optional subtitles for accessibility. Though these videos are short by design, the technical development of each video is not a simple process, and involves research, scriptwriting, talking head and voiceover recording, B-roll selection/recording (which may include gameplay recording), video editing and animation, thumbnail design, and search engine optimization. Each video takes days at a time to put together, not including the necessary background research. But the succinctness of the video in its final form is intentional; they are designed to be viewed by the average online user eager to click to the next thing or to be screened in class on their own as part of a lecture or used as a jumping-off point for further discussion. They may also be assigned as multimedia ‘readings’ on their own or paired with one of the textual sources in the bibliography.

Pro tip: if you want to help support YouTube channels like Eat Pray Anime, please consider assigning videos for personal viewing before screening it in class. Similar to how academic journals need clicks and downloads to generate revenue, views and watch time are YouTube’s currency. They help small channels reach the 4,000 watch hours needed to monetize a channel. Moreover, increased views help encourage the platform’s algorithm to suggest the content to more people. Asking students to watch videos individually creates an opportunity for them to subscribe to the channel and receive a notification when a new video is posted while promoting quality content within the YouTube ecosystem. 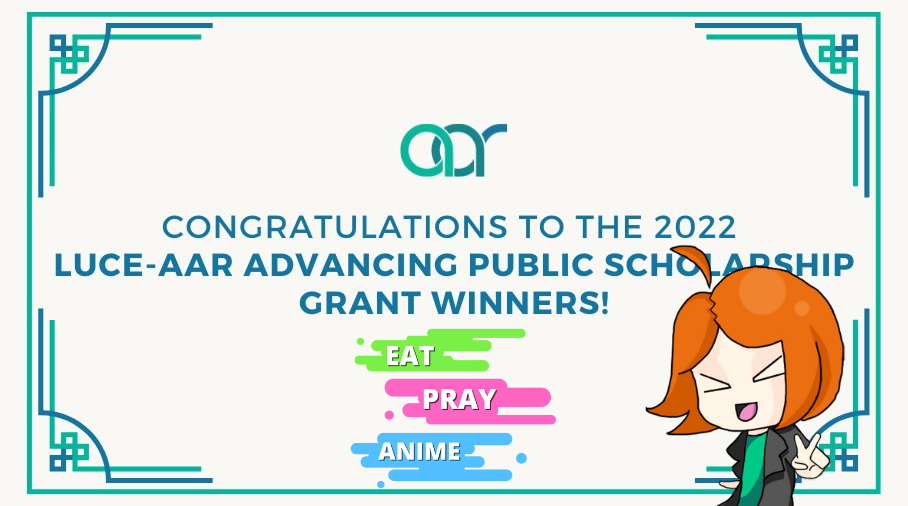 Eat Pray Anime is entering a new phase of development thanks to a 2022 Luce-AAR Advancing Public Scholarship grant. The award will fund upgrading equipment, two new series, and increased–and compensated!–collaboration with scholars.

The first new series will be a ‘book club’ series, taking some inspiration from popular productivity YouTuber Ali Abdaal, that introduces the main points of traditional scholarly books in Japanese and religious studies. These videos will help my audience build fundamental literacies and provide a resource for educators already teaching with the books or designing courses.

The second series will explore the history of shamanism in Japan. This shamanism series will draw upon the popularity of anime like Sailor Moon, Shaman King, and Demon Slayer to historicize spirit mediums and diviners in Japanese religion. In particular, the series will contextualize shamanism as an etic analytical category, explore emic mythical and historical categories such as miko, itako (blind female mediums), and uranaishi (fortune tellers), and interview women who currently work as miko about their activities and experiences.

Eat Pray Anime seeks to combat Orientalist and otherwise essentialist stereotypes of Japan as an unknowable, homogenous ‘Other’ by making connections between popular media and Japanese and religious studies. I aim to break down barriers between experts and fans and create accessible, rigorously researched digital resources that can be enjoyed at home on the couch or used in the classroom. Eat Pray Anime is an ongoing labor of love, but it is also a form of professional, alternative academic labor that combines synthesizing scholarship, creating new knowledge, and teaching through video.