“Uuwaaa!” or “sugoi! (amazing!)” are the typical reactions of Japanese visitors to Brigham Young University’s Harry F. Bruning Collection of Japanese Rare Books, Manuscripts, and Maps when they see the Bakemono no e 化物之絵 (Pictures of Monsters) handscroll opened before them. These exclamations repeat, often with increased volume and enthusiasm, as the monsters are revealed, one by one. At over a foot and a half wide and fifty feet long, its large format combined with the virtuosic brushwork and liberal use of gold and silver pigments makes this scroll an enchanting viewing experience. One venerable English-speaking aficionado said to me, “This is hot spit, Jack!” as he viewed this mid-seventeenth century masterpiece. 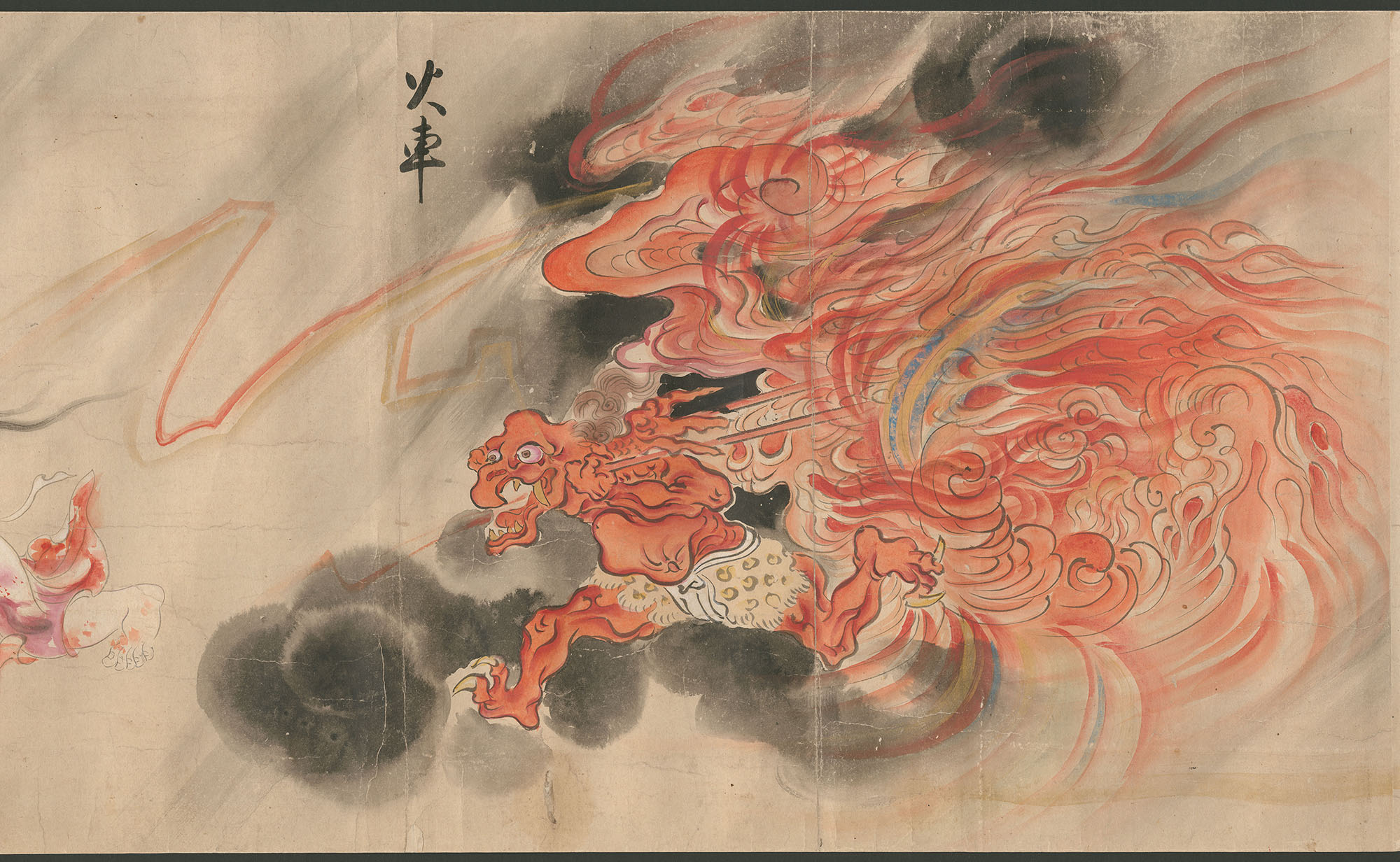 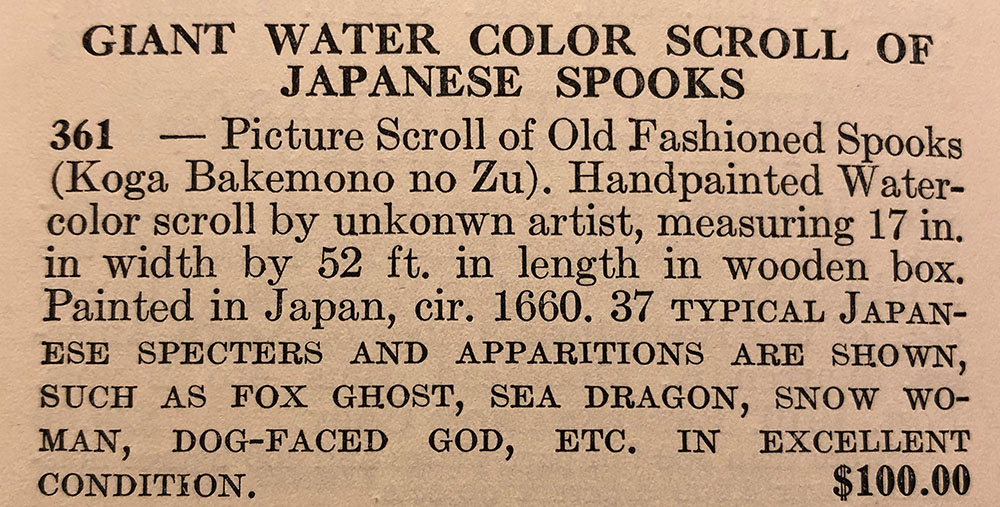 The bulk of Bruning’s collection was purchased by the Harold B. Lee Library at BYU in 1965 and is now held in the L. Tom Perry Special Collections of the Lee Library, where Bakemono no e has become a marquee item in the collection.

This scroll is typical of the “monster index” (bakemono zukushi 化け物尽くし) genre of scrolls and books that became popular during the Edo period (1600-1868). If Tuttle’s description is accurate (and we have found internal and external evidence to support its accuracy), Bakemono no e is in fact the oldest extant example of a bakemono zukushi scroll, predating the current oldest known version of a monster index scroll, Sawaki Sūshi’s 佐脇嵩之 (1707-1772) Hyakkai zukan 百怪図巻 (Illustrated scroll of a hundred demons, 1737), by several decades.

Between 1965 and 1989, Bakemono no e languished in the vault of Special Collections, unviewed and unappreciated. In 1989, it was finally cataloged by Edward Enhua Peng (1944-2004), who at the time was a graduate student in comparative literature at BYU. Peng went on to become a scholar of haikai poetry and professor of Chinese at BYU. After that, the scroll once again slipped into the vault—and obscurity—until 2004. This year an exhibit highlighting treasures of the Bruning Collection was curated by BYU faculty J. Scott Miller and Lee Butler, and Bakemono no e was displayed to the public for the first time in the United States and perhaps for the first time ever. A symposium was held in conjunction with the exhibit, “Looking Inward, Looking Outward: Japanese Representations of Self and Other,” and one of the presenters, Lawrence E. Marceau of the University of Auckland, was fascinated by the scroll. He took a CD-rom filled with images back home with him after the symposium.

Then, in 2007, while visiting Japan, Marceau showed images of the scroll to well-known yōkai scholar and collector Yumoto Kōichi 湯本豪一, who at the time was curator at the Kawasaki City Museum. Yumoto was instantly struck by the similarity of the scroll to a scroll he owned that was painted in 1802 by Kanō Tōrin Yoshinobu 狩野洞琳由信 (d. 1820). The scrolls are in fact identical, except that Yumoto’s scroll lacks any names for the monsters. In BYU’s scroll, each monster is named.

Yumoto was surprised to discover the name for one monster in particular: nurikabe. The image of nurikabe in Yumoto’s scroll had puzzled him because he had never seen another image of the same monster in any yōkai materials, until he saw Bakemono no e and finally knew its name. Nurikabe is particularly important in the world of yōkai because this monster is the beloved sidekick to Kitarō, the titular character of Mizuki Shigeru’s 水木しげる(1922-2015) uber-popular manga series GeGeGe no Kitarō ゲゲゲの鬼太郎 (1965-1997).

Nurikabe, which means “plastered wall,” is an inexplicable phenomenon that impedes a traveler’s progress as if it were an invisible wall. Mizuki claimed to have encountered a nurikabe when he served as a soldier in New Guinea during World War II. Until scholars were introduced to the Bakemono no e scroll, it was thought that nurikabe had not been illustrated before the modern era. Folklorist Yanagita Kunio 柳田国男 (1875-1962) recorded oral traditions concerning nurikabe in Fukuoka Prefecture and published his findings in 1933 (Yanagita Kunio, “Yōkai meii,” in vol. 4 of Teihon Yanagita Kunio shū (Chikuma Shobō, 1975), pp. 424-38). Mizuki based his illustration of nurikabe in GeGeGe no Kitarō on Yanagita’s description, and was surprised and pleased when he found out nurikabe had indeed been illustrated in the Edo period, calling BYU’s Bakemono no e “an important yōkai national treasure” (Murakami Kenji, “GeGeGe no ‘nurikabe’, konna sugata? Edoki no emaki ni tōjō,” Asahi Shinbun, 2007.8.7). 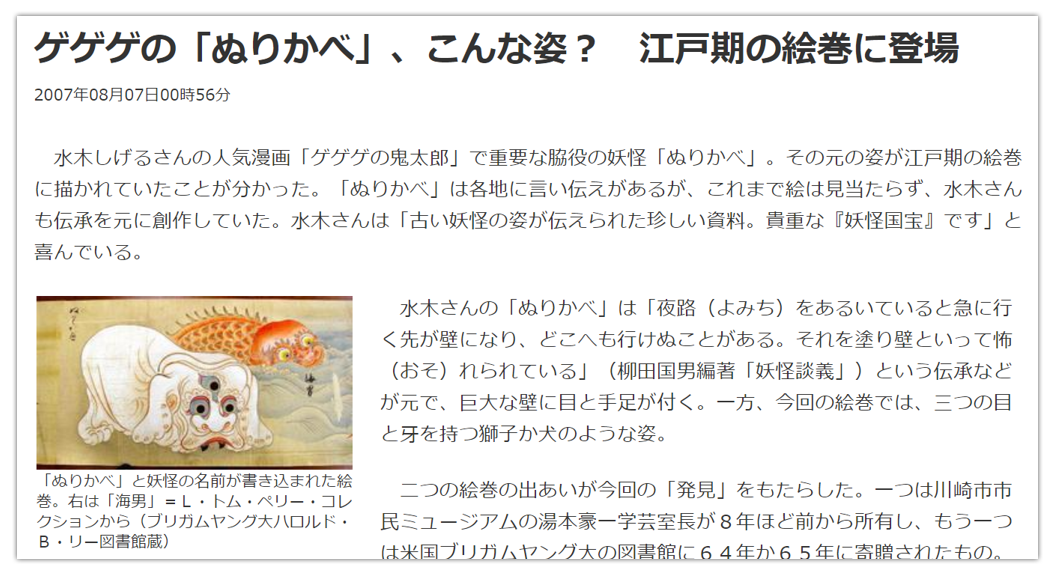 A screen capture of the August 2007 Asahi newspaper article about the discovery of Bakemono no e.

Some scholars contended that the newly discovered image of nurikabe was not in fact the same nurikabe of folklore in Kyushu. Some also contended that BYU’s scroll was a copy of Yumoto’s 1802 scroll, though none had traveled to BYU to view the original scroll. If they had, they would have realized its age and quality as an original work of the seventeenth century and not a nineteenth-century copy. Discussions and debates about these scrolls and nurikabe’s identity were featured in two issues of the yōkai studies journal Kwai (Yumoto Kōichi, "Tachifusagaru nurikabe no nazo," Kwai 33:7 (2011), pp. 262-65; Yumoto Kōichi, Katō Osamu, Kyōgoku Natsuhiko, Tada Katsumi, and Murakami Kenji, "Futatsu no yōkai emaki kara nurikabe no nazo o saguru,” Kwai 24:2 (2008), pp. 118-23). 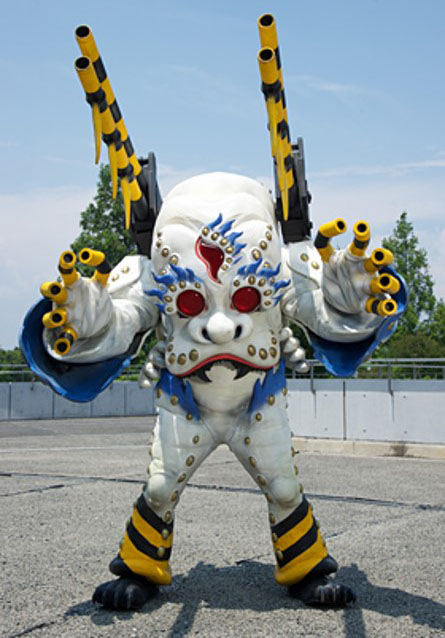 The Asahi newspaper article that introduced this conundrum included a photograph of BYU’s nurikabe, and this tiny image unexpectedly sparked a revolution in worldwide understanding of the yōkai phenomenon known as nurikabe, dramatically transforming its visual landscape. Mizuki had imagined nurikabe as a rather plain squarish gray block with eyes, a mouth, and tiny limbs. In contrast, Bakemono no e depicts nurikabe in a strikingly baroque fashion—a large white dog-elephant-like creature with three colorful eyes and black fangs. The photograph of BYU’s nurikabe from the Asahi article made its way across the internet, inspiring new interpretations in art, comic books, animation, and a variety of other formats, including an appearance in 2015 as an enemy combatant in the long running “Power Rangers” television series.

Right: Nurikabe as an enemy combatant on the “Power Rangers” television show in 2015

Today, both the GeGeGe no Kitarō nurikabe and the Bakemono no e nurikabe occupy the shared visual space of this folklore phenomenon, demonstrating the continued mutability of image, taxonomy, and meaning in Japanese yōkai culture. Because Mizuki’s nurikabe and the BYU nurikabe are so different (one gray, the other colorful; one square, the other elephantine; one with two eyes, the other with three), it is easy to trace the influence of each as nurikabe images now sometimes lean toward one or the other, or become mashups of both. 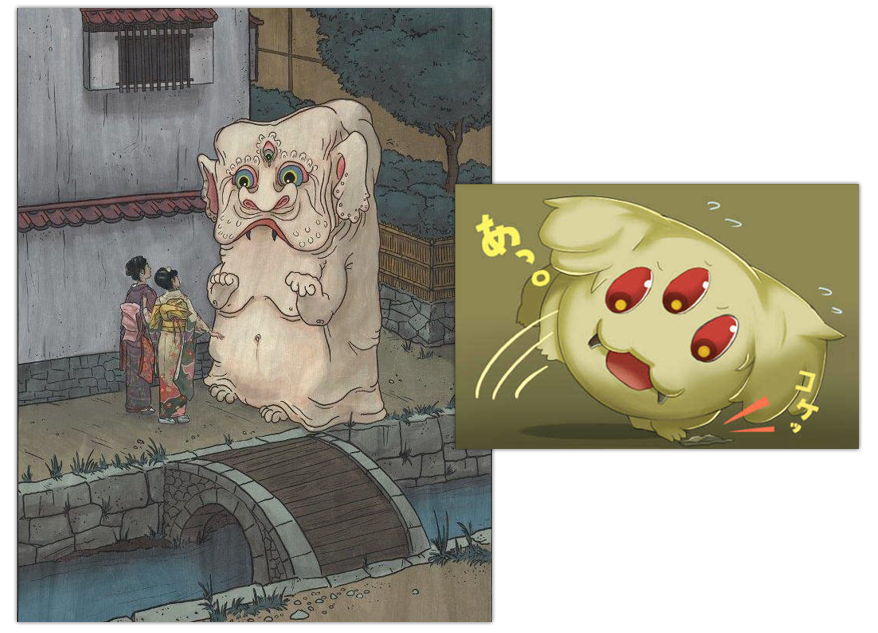 When a simple Google search revealed to me the afterlife of the 2007 Asahi article and the ongoing transmutations of nurikabe imagery, I realized that, coupled with its age and status as the earliest monster index scroll, the newfound currency of Bakemono no e’s images made it a very important cultural artifact. I wanted my students to become involved with historical, artistic, and cultural materials that were simultaneously very old and very relevant to current trends in Japan.

In 2018, my undergraduate students in Japanese 345: Introduction to Japanese Culture took on the scroll as a semester-long group project. Students were assigned one monster to research, comparing the images to other examples, and finding information about monstrous behaviors and characteristics. We first placed all of this information on Ten Thousand Rooms, an annotation platform for East Asian texts developed by Yale University. The next step was to revise and scale down the annotations and create a Wikipedia article for the scroll, which we did in December of 2018.

Students posted images of the BYU scroll to various Wikipedia articles devoted to individual monsters, edited information found in these articles, and introduced new information as well. Since that time, the work my students did on Wikipedia has been viewed over 4.2 million times. After the success of this student project, the Harold B. Lee Library decided to build a website devoted to the scroll. Web designers Grant Zabriskie and Sarah Larson created a stylish and fun interactive website where student annotations were once again featured. The student designer Sarah Larson fell in love with the scroll’s imagery and went above and beyond in her stunning conceptions for the website. 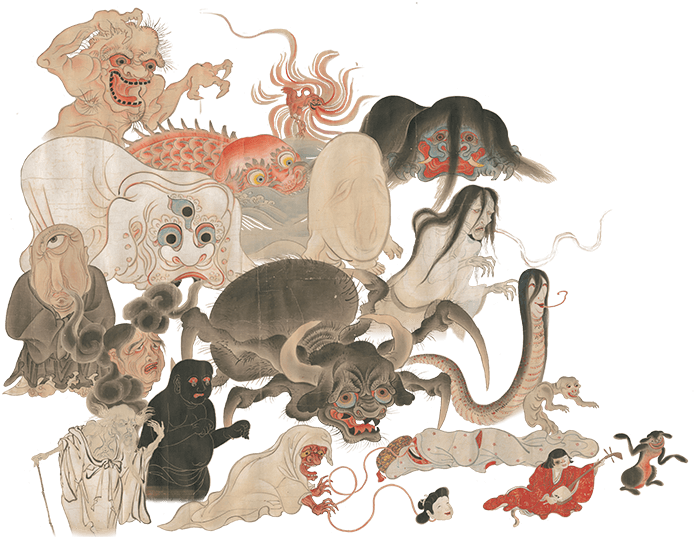 Working with the Bakemono no e handscroll enabled me to not only help my students discover and interact with a fun and significant relic of Japan’s past, enjoying newfound relevance in the present, but it also made it possible to share this fascinating scroll with the world. I did not set out to create a “digital humanities project,” but that’s exactly what we ended up doing. Along the way, we all discovered the challenges and rewards of digital humanities and public-facing scholarship. The potential for student work to reach a wide—worldwide in fact—audience through their work in the classroom is thrilling and imbues otherwise finite class projects with meaning and purpose beyond the semester’s end. Digital humanities projects such as this also enable libraries, archives, and collections to share their wealth with students and scholars across the globe. The digital world enables us to penetrate the invisible walls of remote locationality, break through the brick walls of library buildings, and discover the awesome creatures lurking there. Jump into our world of yōkai at: https://bakemono.lib.byu.edu/.