From the Archives: NCC’s Image Use Protocol

The NCC was founded in 1991 with the mission to expand access to Japan Studies materials and respond to needs in the field in North America by coordinating the efforts of faculty, researchers, librarians, publishers, vendors, and institutions. One of the best examples of successful coordination across our constituencies is our work on Image Use Protocol (IUP) resources. NCC’s IUP guide was created as a direct response to requests from faculty in North America, though it is now used by researchers around the globe. As images became more widely used and published, it became clear that image-use rights--and how to obtain them--needed to be better understood.

Once this need was identified, NCC utilized it’s unique status and structure to survey Japan Studies scholars and publishers to more fully assess the issues surrounding copyright and images for publications. Several differences in legal definitions and practice between Japan and the US and Europe emerged. Former NCC Executive Director Victoria Lyon Bestor described the problem in a 2008 NCC newsletter:

Generally Japanese publishers undertake the responsibility of gaining permissions and paying fees for image use on behalf of their authors. And, in Japan, there may be different understandings of “fair use” for images that accompany scholarly text in Japanese publications that may exempt those visual materials from permissions requirements that would be expected by Western academic publishers....US and foreign academic authors are usually personally responsible for locating and covering the full costs of image rights for their publications. US academic publishers require explicit permission to use those images from the Japanese rights holders even in cases where the display or reproduction of images might be viewed as “fair use” in publication or teaching done in Japan.

After the needs and difficulties of the Japan Studies community were articulated, NCC convened a conference held at the International House of Japan in 2008 and brought together the many relevant parties: scholars, librarians, publishers, and various rights holders such as museums. The goal was to discuss the concerns of researchers and scholars, develop better mutual understanding of publishing requirements and expectations, and create a set of best practices for navigating the differences moving forward.

As a result of this effort, the task force was able to create bilingual letter templates that can be used to accurately describe a request and offer a better chance for scholars to acquire the  permissions needed for their publications. These templates continue to be one of the most popular resources on the NCC website for scholars looking to gain access to Japanese images.

In addition to bilingual templates, the IUP guide continues to adapt to changing needs of researchers and has other important resources available. The pages about Finding Images, and more recently Finding Moving Images, have been particularly helpful recently during the coronavirus pandemic. 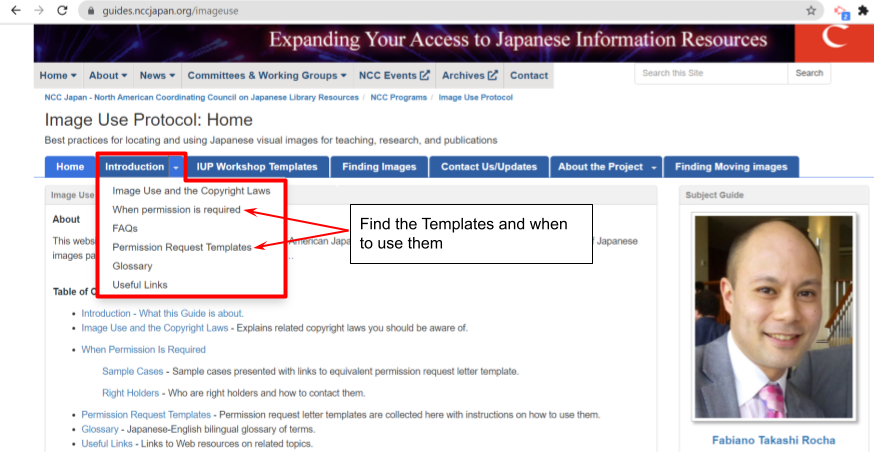